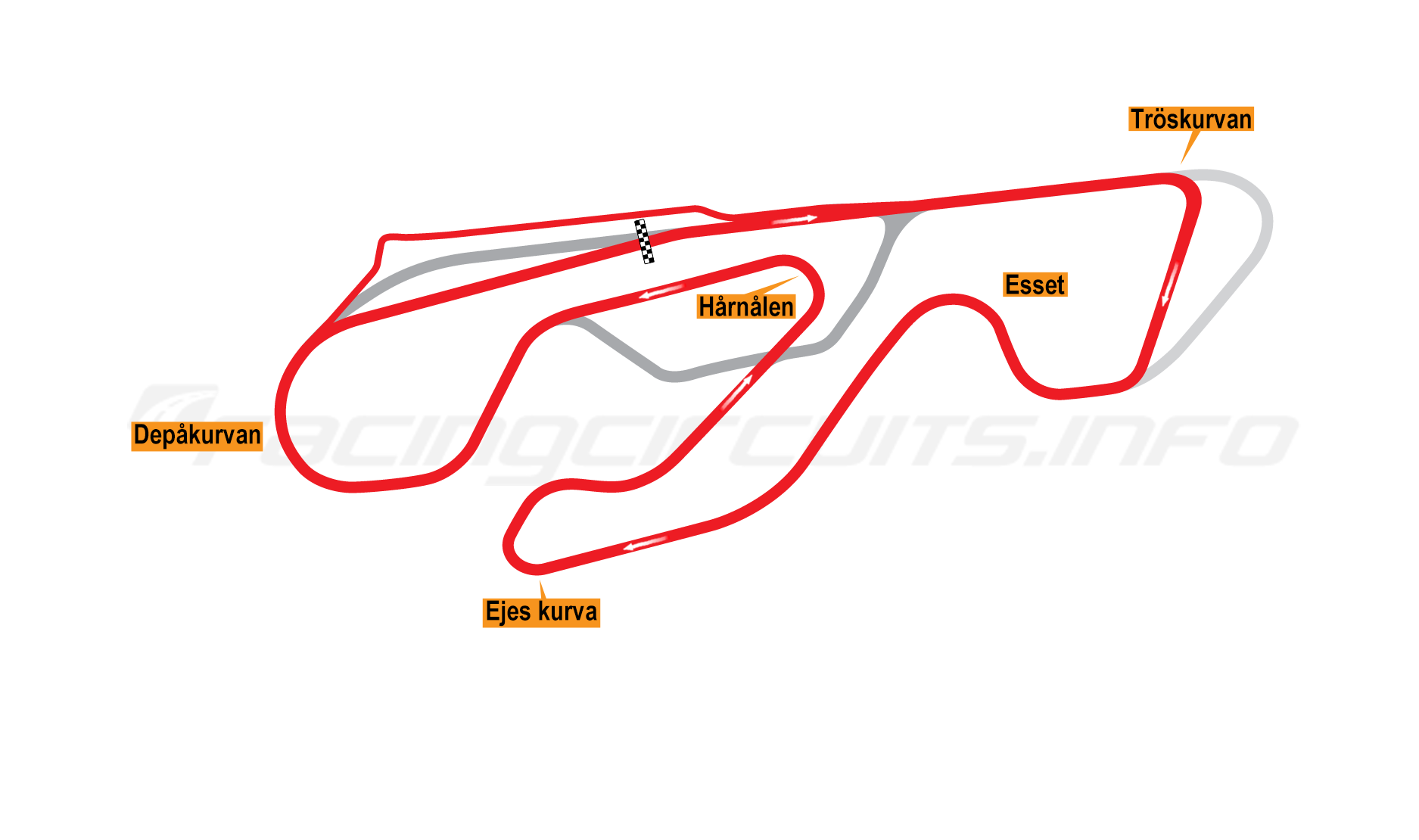 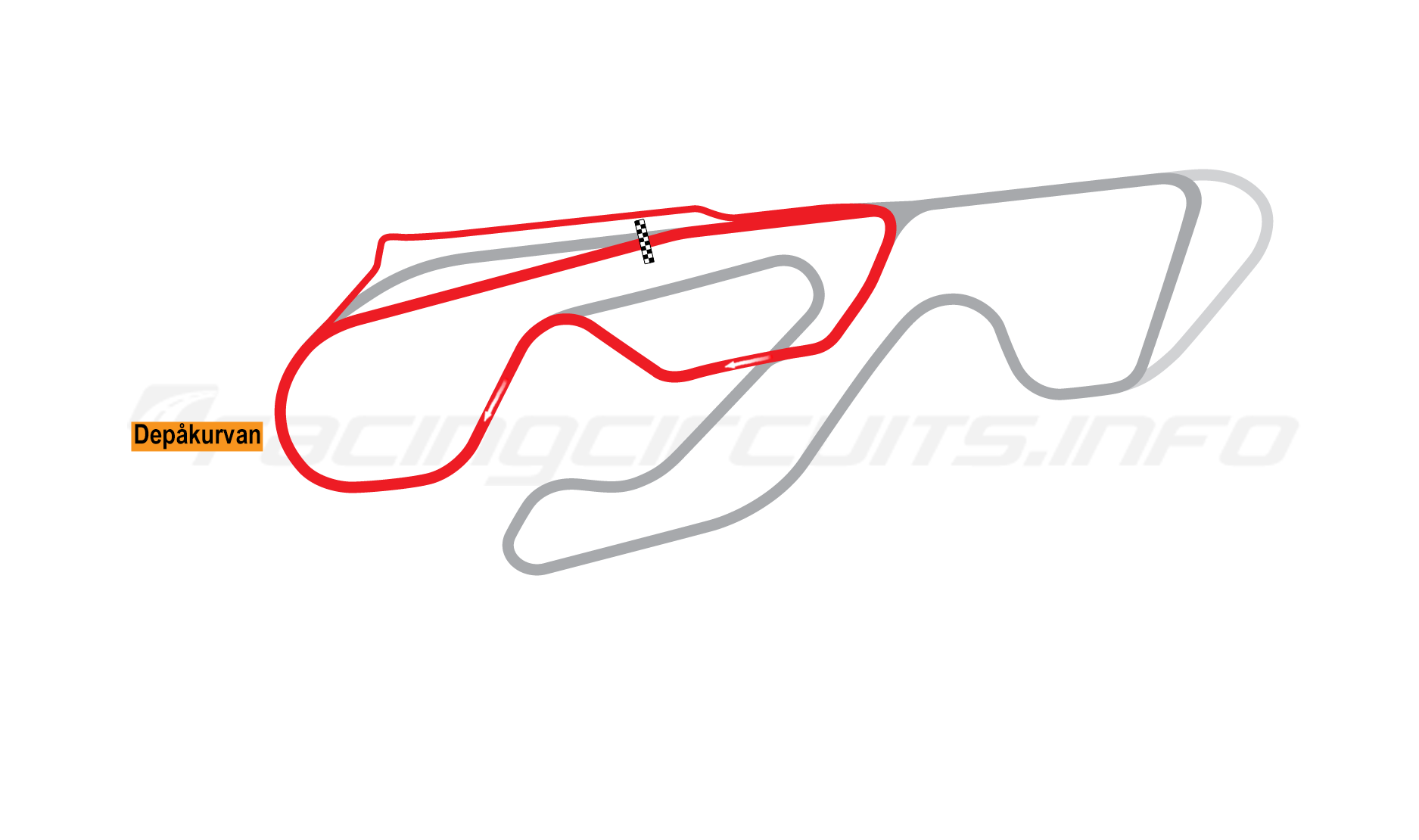 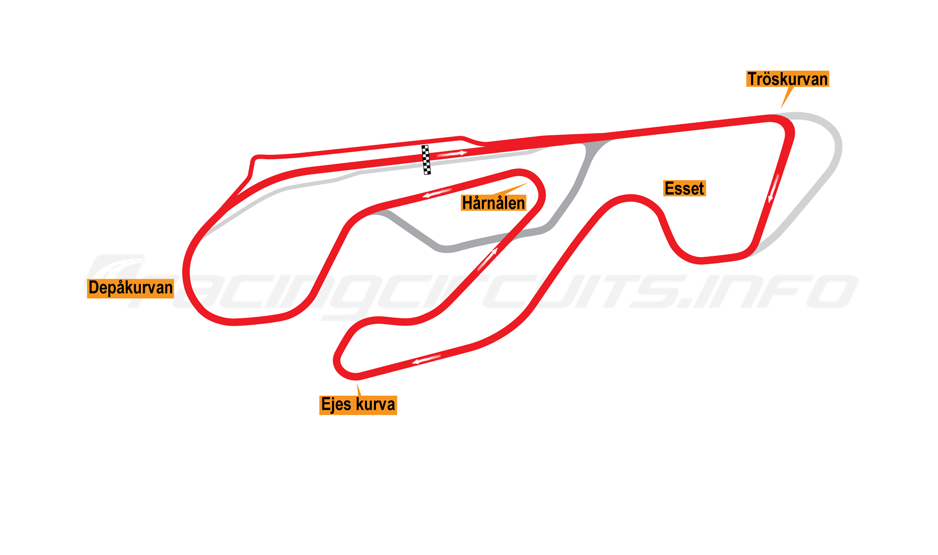 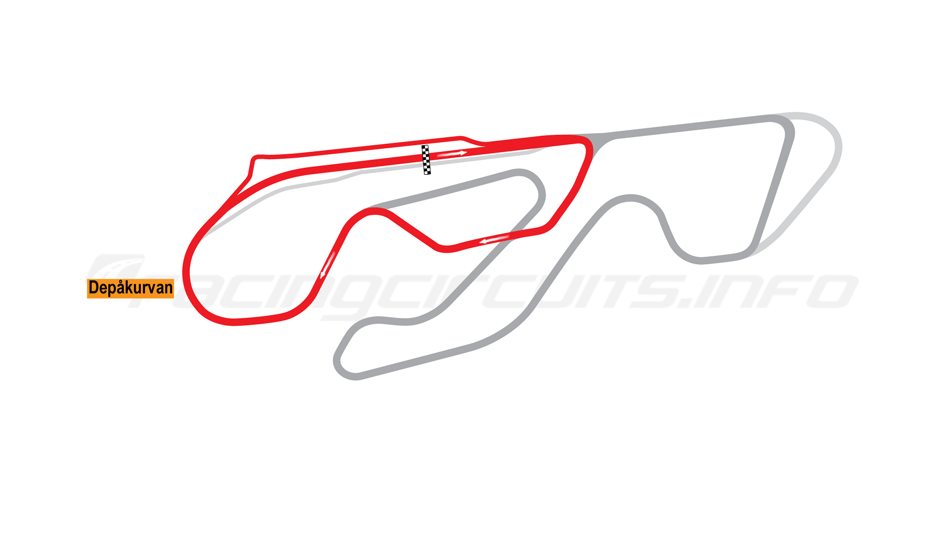 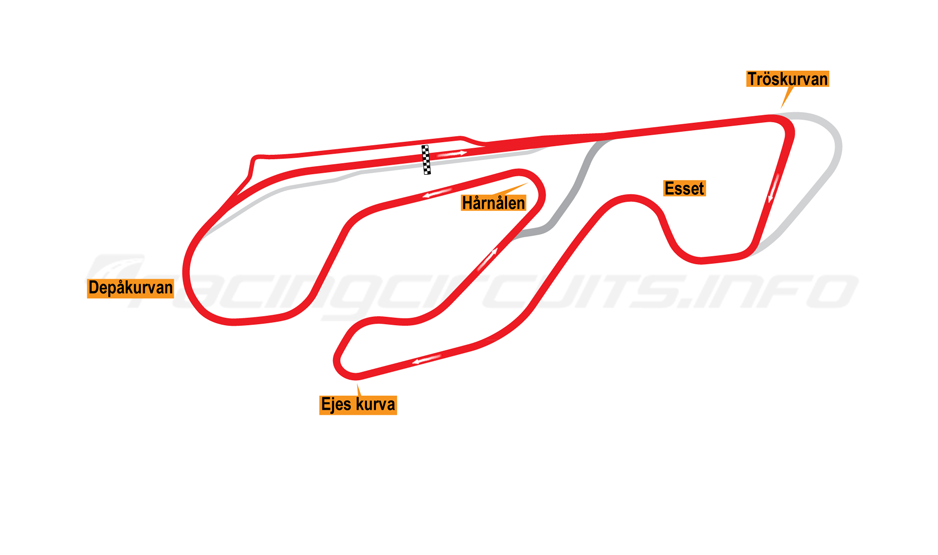 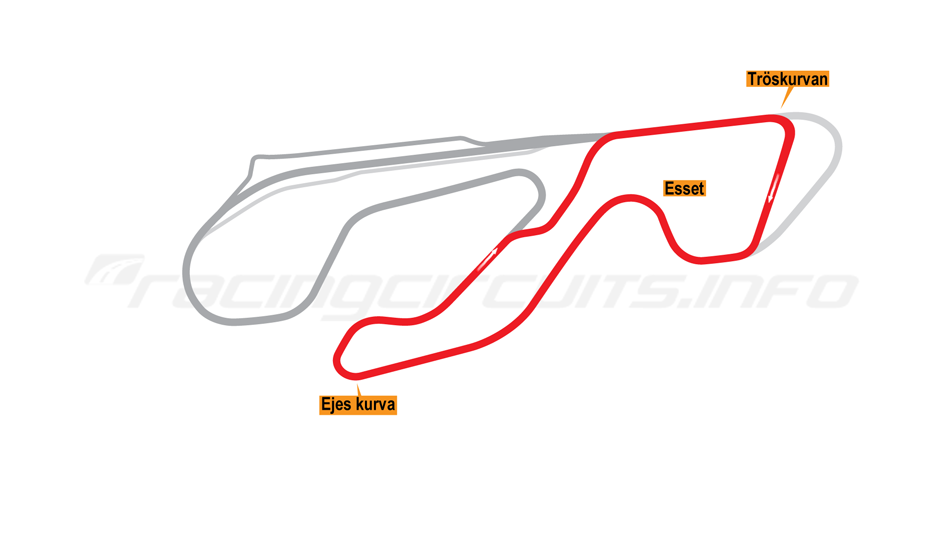 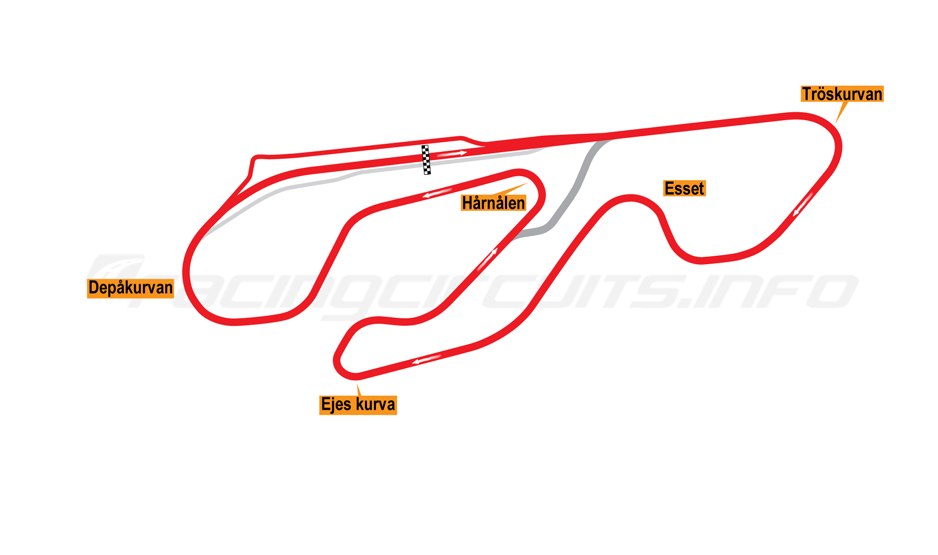 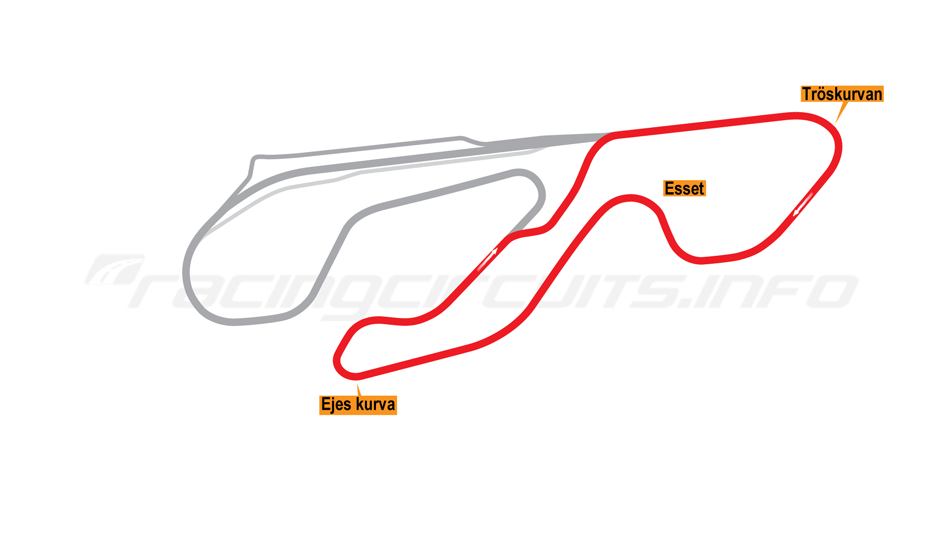 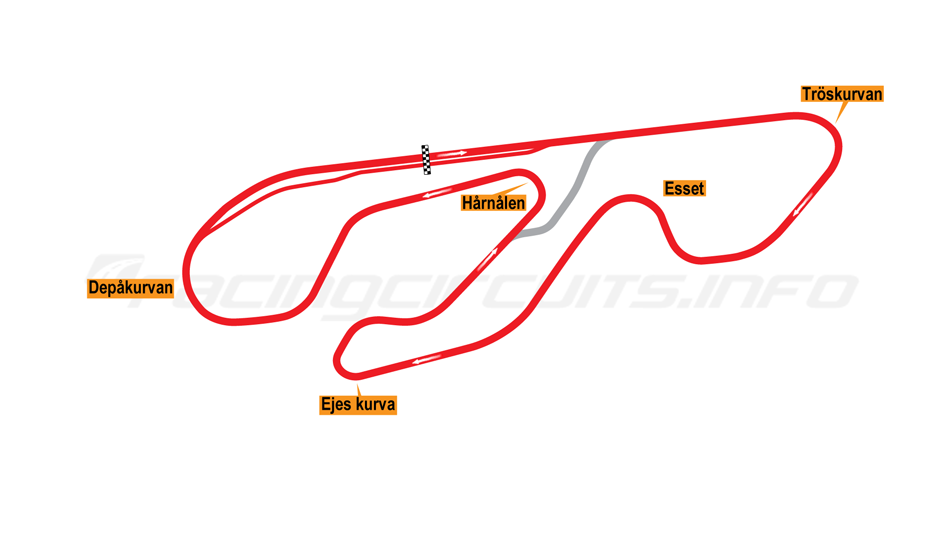 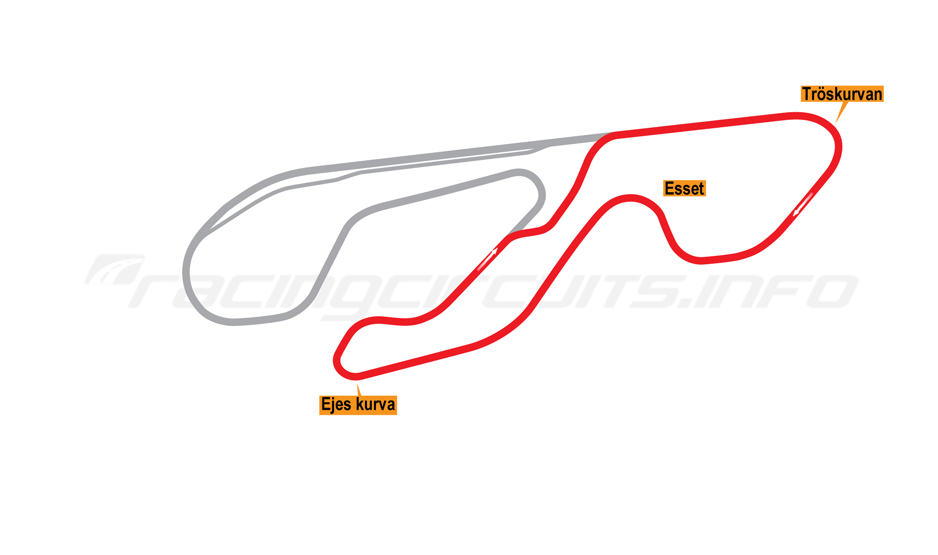 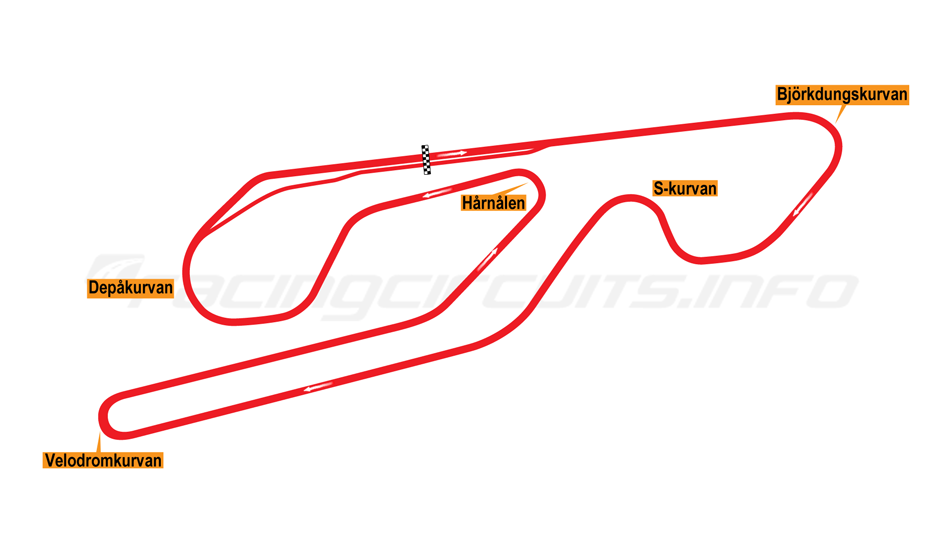 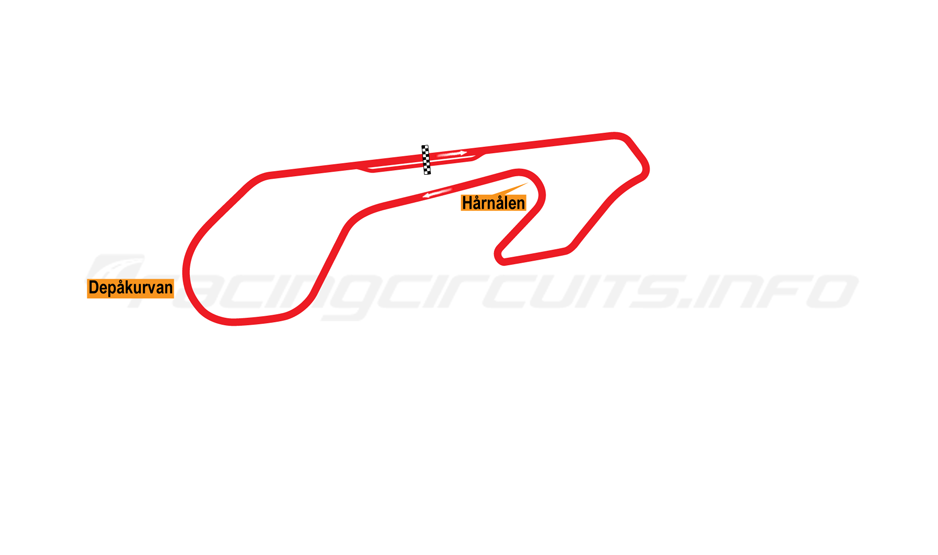 Gelleråsen Arena (or Karlsoga as it is also known) is Sweden's oldest circuit, home to the Kanonloppet races and one of the country's most important venues. Once a host to non championship Formula One and Formula Two races, today the circuit near Karlskoga is a major player on the Swedish national racing scene.

Designed from the outset so that spectators can see the whole course from any vantage point, the circuit has overcome complete closure following a tragic accident in the 1970s to become one of the busiest in operation in Sweden.

The annual visit of the Swedish Touring Car Championship quickly became a season highlight and its successor, the STCC TCR Scandinavia is still a visitor today.

The track owes its existence to the single-mindedness of Gunnar Olsson, the then chairman of Karlskoga Motor Club. In the immediate aftermath of World War Two, the club began looking at options for re-starting motor racing. Racing had already returned elsewhere on the public roads at Skarpnack for the Stockholm Grand Prix and similar propositions were considered in Karlskoga. A course joining the public roads from Gelleråsen to Lonnshyttan and Källmo was floated, though ultimately came to nothing.

It was then that Olsson met Elias Frisk, a motorsport enthusiast and local landowner who also operated a quarry. The pair soon hatched a plan to create a permanent course on Frisk's land, using gravel from his quarry to form the racing surface. The Karlskoga Motor Club would be assigned a lease on the land, with payments delayed until money was forthcoming from the racing activities.

On June 21, 1949 the motor club gave its formal go-ahead to the plans and track construction began immediately. In just one week gravel was laid out to form a 1.55 km loop. Before anyone really knew it, Sweden had a motor racing circuit. It proved something of a surprise to the local authorities too, since Olsson had not asked for a building permit, reasoning it would be harder to say no if the circuit actually existed... It would lead to years of legal wrangles, which were eventually settled when Olsson paid a symbolic fine.

The inaugural race was the first Kanonloppet ('Canon Race' – the building of canons having been a historic industry in the area) on 4 June 1950. This took place on the gravel surface and proved a huge hit with spectators, some 15,000 turning out to watch. The gravel surface played havoc with the cars' cooling systems however and many overheated. Olsson had bigger and better things planned however, with an eye on capturing European or World Championship events. He appreciated that the course would need to have a proper sealed surface, so by the time of the second Kanonloppet, held in 1952, the whole course had been asphalted and extended to 1.6km.

The 1953 season was spent making further upgrades, with the course extended once again through the creation of the Björkdungskurvan (later renamed the Tröskurvan). The new length would allow the possibility of international races. The revised circuit was officially opened the following year by Prince Bertil and among the competitors was film director Roberto Rosselini, who took part in one of the sportscar races. He had driven his Ferrari all the way from Italy, with his film star wife Ingrid Bergmann riding shotgun...

In 1957 the circuit took another step forward, when drivers from a variety of international countries took part in the sportscar races, with the main class for over two-litre cars won by Swede Gunnar Carlsson. The following year the circuit was extended once again, this time through the addition of two straights linked by a steeply banked hairpin bend called the Velodromkurvan. This really did have to be seen to be believed – comparisons with a fairground wall of death would not be too far wide of the mark. Stirling Moss won the sportscar race in front of 25,000 excited spectators.

Sportscar racing continued as the main form of racing until 1961, when the Kanonloppet switched to Formula One single-seater rules and the circuit really hit international consciousness. The non-championship races quickly attracted quality entries from overseas, including Jim Clark, Stirling Moss, John Surtees and even motorcycle champion Geoff Duke. Moss took victory in a Cooper-Climax over local Jo Bonnier, who was in a works Porsche. Sadly, the circuit's prime visionary Gunnar Olsson died suddenly at the end of the year, his loss being felt keenly by the Karlskoga Motor Club.

Nevertheless the show had to go on and two more F1 races were run, with Masten Gregory winning in 1962 and Jim Clark in 1963, the latter race also marking the F1 debut of New Zealander Denny Hulme, who finished fourth. Thereafter a switch to F2 was made, with Jack Brabham winning three in a row and Jochen Rindt triumphing in 1967.

Formula Three and sportscars would become the main categories in the following years but the enthusiasm of the spectators was undiminished. The 1968 race was notable for having music and screen star Eartha Kitt as 'grand marshal'. Following the race she was taken on an initially sedate lap of the circuit by second-place finisher Jo Bonnier, though he put his foot down on the approach to the Velodromkurvan to the evident delight of the fans, if not Ms Kitt...

Then, in 1970, came the circuit's blackest day. During a touring car race leading up to the Kanonloppet, two cars – a Ford Escort and a BMW 2002 – tangled on the entry to the Velodromkurvan straight, careering off the road and bouncing over the grass banking into the crowd. Many of the spectators had been distracted by a separate incident at the previous corner and did not see the cars coming. Five people died and around 30 more were injured. Racing was suspended for several hours but eventually resumed, with Chris Craft taking a subdued victory in a McLaren M8C. En route he set what was to prove the long circuit's all-time lap record of 1m16.4s.

In the aftermath of the accident, new regulations were imposed on circuits by Swedish authorities, requiring significantly upgraded circuit barriers and safety for spectators. Gelleråson closed for two years while the modifications were carried out and subsequently spectators were confined to the northern and westerrn sides of the circuit only (though still with the benefit of being able to see the whole course).

In 1973 the track reopened with the highlight of the season being the visit of the the European Championship for Formula 2. Jean-Pierre Jarier won ahead of Peter Gethin and Torsten Palm. The following year's race was not as successful, despite a home victory for Ronnie Peterson. Sponsors and investors pulled out and by 1975 a new management team had been brought in, though a period of gradual decline had begun.

International races were now a thing of the past and, over time, the facility became more and more run-down as finances became ever tighter. In 1986 the Karlskoga Motor Club was declared bankrupt and the track ownership passed to a new company, Gelleråsen AB, which in turn leased the facility to Karlskoga Motor Stadium AB, owned by two well-known motorsport personalities, Mike Luff and Lennart Bohlin.

Under the new management, the decline was halted and by the mid-1990s, finances had recovered to such an extent that extensive renovations could be carried out. The track was shortened through the elimination of the Velodromkurvan, with the banking demolished and the rest of the original track converted into a kart circuit. A short testing circuit was also incorporated into the new design. In 2000 the pits and paddock were relocated to the outside of the circuit and numerous other improvements brought the circuit back up to standard.

Further revisions came in 2006, when a new first corner complex was inserted, closer to the start/finish line in order to improve the available run-off. The latest investment has seen the creation of a new short course, which opened in 2014. This incorporates portions of the original short course with a new stretch of asphalt linking it to the Depåkurvan. For the first time, the short course incorporated the start/finish straight and pit area, allowing racing action to be held. The local Legends series has become a regular on the new course. The 2015 season also saw spectator improvements, thanks to the addition of a new 500-seat grandstand at Depåkurvan.

In 2016, a further change came with the a realignment of the Depåkurvan, the exit of which was bypassed by a new straight section which rejoins the main straight at a slight angle at the start finish line.  The original course is retained and indeed is still used to form the grid and for race starts.

In 2018, noted touring car driver Richard Göransson took over the running of the track, renaming it to Gelleråsen Arena in the process. He has set about further refurbishments, including to the restaurant and offices.

Planning a visit to Gelleråsen Arena? Find the best deals near to the circuit on hotels, apartments and rooms to rent from the map below.

Gelleråsen Arena is located at Gelleråson, Sweden, near to near to Karlstad, Kristineham and Örebro. The nearest international airport is at Örebro, around 30 minutes from the circuit.

By road, the circuit is located around 6kms north of the town of Karlskoga on route 205. Follow the signs for 'Motorbana' to reach the circuit. 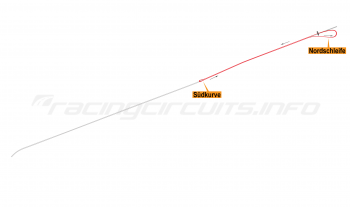 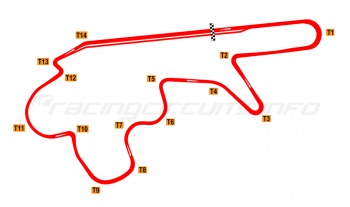 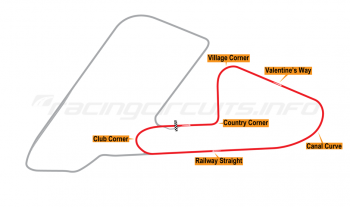