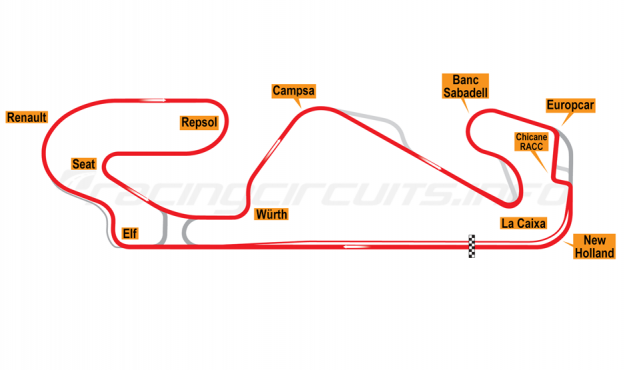 The Circuit de Barcelona-Catalunya (as it became known in September 2013) is one of Europe's busiest tracks, playing host to high profile rounds of Formula One, MotoGP and becoming the seasonal winter home of the F1 teams as they test their new cars and drivers.

Plans for the circuit were first suggested in the mid-80s, with the Catalan government keen to prise the grand prix away from Jerez and return racing to Barcelona for the first time since the 1970s, when the fabled Monjuich Park course was last used for Formula One. A plot of land north of Barcelona, near to the town of Montmeló, was secured and the foundation stone was laid in February 1989.

Construction continued through 1990 and into 1991, with the completed course ready for its first event, a round of the Spanish Touring Car Championship, on 10th September 1991. Former F1 driver Luís Pérez-Sala took the victory. Two weeks later came the Formula One Spanish Grand Prix, featuring a memorable duel between Mansell and Senna down the front straight. The Motorcyle Grand Prix followed on a month later.

The circuit features a mix of fast and slow corners, a long straight and a variety of elevation changes. As a result, it is a popular testing venue, aided by the usual pleasant winter weather. Spectator facilities, which have always been good, were boosted further in 2002 with the opening of a new main grandstand, designed by Herman Tilke and with a capacity of 9,580. Opposite, a gigantic electronic scoring board now also dominates the end of the pitlane.

Over the years a number of circuit revisions have been made. In 1994, following the tragedies at Imola, the F1 drivers were critical of the lack of run off at the end of the fast Nissan chicane, and an ungainly additional chicane was hastily built out of tyre stacks. Possibly one of the worst additions to a track ever, it did at least allow for the race to go ahead.

The following year, the Nissan chicane was bypassed altogether, the track continuing in a straight line from Campsa down to La Ciaxa. The original chicane remains, though it is now rarely used, with even the national course bypassing it in recent years.

Although designed with F1 in mind, the increasing reliance of modern grand prix on aerodynamic grip lead to a number of dull, processional races as the drivers found it hard to overtake. In particular, following a competitor close enough through the final curve to gain a slipstream down the main straight became virtually impossible. To add an additional overtaking spot, La Caixa was tightened in 2004, and in 2007 a clumsy chicane was inserted at the penultimate corner. It has done little to improve the overtaking, but it has slowed the cars through the final curve.

Happily, without the aerodynamic constraints of the F1 cars, the motorcycle course remained largely unchanged for a few more years and witnessed some thrilling racing. As if to emphasise the point that overtaking is much easier on two wheels, Valentino Rossi pulled off a spectacular last-lap dive on Jorge Lorenzo in the final turn of the 2009 race to deny the Spaniard a home victory.

Eventually, even the pace of development on two wheels meant that speeds began to outstrip safety.  This was tragically proved during practice for the 2016 Moto2 race, when Luis Salom crashed at Turn 12.  The air fence sent the bike in the air and into the path of the hapless rider, who died a short time later from his injuries.  As a result of his death, the race used the layout normally used by Formula One, to reduce speeds in the part of the track where Salom had crashed.

During January 2017, the track underwent some modifications to create a more suitable chicane for the motorcycles at the behest of the FIM. While the F1 chicane remained as is, a new variant was created closer to the Europcar turn, in a bid to prevent riders from cutting the pit lane entry.  However, this proved more trouble than it was worth, with the transition between new and old asphalt proving more problematic and the chicane was abandoned.

Further changes were made to the circuit in December 2017 as grandstands were removed to add additional runoff at the exit of Europcar that allowed the FIM to eliminate the chicane altogether and revert to the original layout (although the F1 Turn 10 hairpin was kept).

The track was resurfaced in 2018 as a result of calls by MotoGP riders to improve the amount of grip on the surface. Previously the track had been resurfaced in 2004.  Then in 2019 came the addition of the penalty lap loop at Turns 1-3, used by MotoGP races since 2019.

For the 2021 season, La Ciaxa corner (Turn 10) was re-profiled following safety improvements made in conjunction with the FIA and FIM. The new design is closer to the orginal corner profile, following a line between the old corner and the much tighter 2004 F1 configuration. The change allows for an extension of the run-off area at the turn, thus increasing the safety distance and allowing both car and motorcycles to use the same version.  It is expected that motorcycle racers will continue to bypass the final chicane at the end of the lap.

Road access to the circuit is good, as it is close to  a number of major highways; follow the C-17 road (exit Montmeló), or the AP-7 highway. If you choose the AP-7 toll highway, you have several exits to reach the circuit (13, 14 and 15).  There are 32,000 parking spaces at Circuit de Catalunya, so for most events getting parked should not be an issue.

There is a good rail link to the circuit; unfortunately, while the line runs parallel to the main grandstand, there is no station at the circuit and Montmeló station is a good 45 minute walk away (and along some pretty busy roads at that).  On grand prix weekends only, shuttle buses operate to the circuit.  Trains run evey half hour from Barcelona at weekends, with the journey to Montmeló taking 30 minutes.

Find the best hotel and room deals near to Circuit de Barcelona-Catalunya: