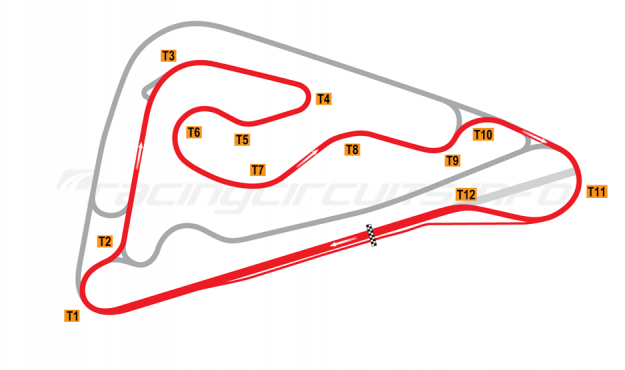 Slovakia has a burgeoning car manufacturing industry, thanks to the presence of factories for Volkswagen, Peugeot-Citroen and KIA, but until recently had lacked purpose-built test and racing facilities. The Slovakiaring has emerged to meet this need and has become a popular and challenging new addition to the central European motor racing scene.

The circuit is located at Orechová Potôň, a short distance from Bratislava airport. Construction began in 2008, to a design by Austrian architect Hans Roth. At 3.680 miles (5.922 km), the 14 mile main course is among the longest in Europe and features four artificially created elevations, which allied to the circuit's high speeds adds greatly to the challenge.

A largely triangular outer course surrounds a series of infield bends which can be combined into six separate course variations. The circuit's safety measures have been installed in such a way as to enable running in both directions creating a total of 12 possible variations, though racing has tended to be in the traditional clockwise direction using variation four.

The circuit opened in September 2009 and by 2011 had attracted international racing, in the form of the FIA GT3 European Championships. The event proved a success, although there was concern over cars becoming airborne over the elevated sections, with problems noted particularly at the section between Turns Two and Three. When the circuit was included on the FIA GT1 World Series schedule the following year, a temporary tyre chicane was used just prior to the rise.  It was not a popular addition, being rather clunky in execution and was not retained in future years.

Slovakiaring has become a popular venue for the SRO-run GT series. It stepped in to host an additional race in 2012 when events in China were cancelled and remained on the calendar in 2013 and for 2014 forms part of the new Blancpain GT series. The German ADAC GT Masters has also found a home here, while the circuit's 'supersub' status was reinforced in 2012 when it was called upon at relatively short notice by the organisers of the World Touring Car Championships to fill a gap in the calendar caused by the cancellation of a race in Argentina. It has retained its race in subsequent years.

The only change to the circuit layout has been the addition of a chicane at Turn 9 of the Circuit 4 layout for the 2018 season.  This was necessary in order to retain its FIA Grade 2 certification, with the non-chicane version now certified to FIA Grade 3 level.  To date, the new chicane has remained unused by racing, with the scheduled events only requiring the lower certification.

The Slovakiaring is located in south west Slovakia, near to Bratislava and the Hungarian and Austrian borders.  The nearest international airport is at Bratislava, around a 40 minute drive to the north west of the circuit.

If travelling by car from Bratislava, take the motorway and then follow the E575 towards Dunajská Streda. Approx. 6km before reaching Dunajská Streda, turn left towards Michal na Ostrove, then drive through the town and out the other side until you reach road 572. Turn right, then after approx. 1.5km, turn left. After approx. 2km you should have reached the Slovakiaring.

Find the best hotel and flight deals near to Slovakiaring: