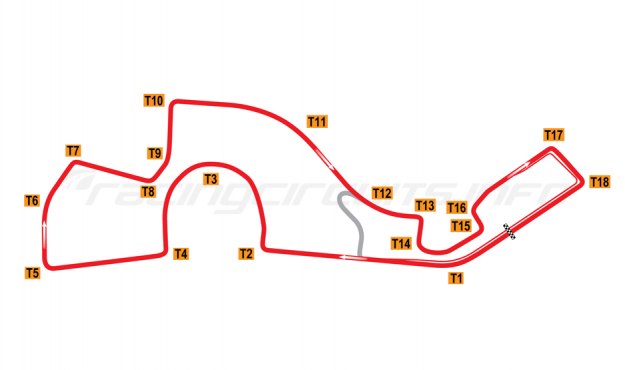 The circuit that finally delivered a Formula One race to Russia, Sochi's track winds its way around the complex used for the 2014 Winter Olympics.

Designed (almost inevitably) by Hermann Tilke, at 3.7miles/5.7km it is the third longest circuit on the racing calendar, behind Spa-Francorchamps in Belgium and Britain's Silverstone. It features permanent pit and paddock facilities and a first half which can be used independently year-round for racing, while the full course continues along public roads between the stadium and other Olympic venue buildings.

The lap begins on the northern edge of the Olympic Park near the train station, running down to the central "medals plaza", the podium for Olympic medals presentations. The circuit then circles the plaza and head east to the Bolshoy Ice Dome, navigating a series of tight corners before turning north to skirt the edge of the Olympic Park, above the main Olympic Village and the Adler Arena Skating Center. It then passes the skating and curling centres, before funnelling up behind the pit paddock toward the train station, and completing a circuit with a one hundred and eighty degree bend.

Construction of the circuit began in concert with the Olympic Park facilities. A budget of nearly $200 million was allocated by the Russian Government for circuit, which has a seven year contract to host Formula One and the junior GP2 and GP3 series. Full completion of the circuit came in June 2014 ahead of its first races, rounds of the Russian Touring Car Series.

The circuit is located in the city of Sochi, in southern Russia on the banks of the Black Sea.  A popular resort destination, Sochi is now also one of the country's top sporting destinations thanks to its hosting of the Winter Olympics, Grand Prix circuit and host city status for the 2018 FIFA World Cup.

Sochi's primary gateway is Sochi International Airport, which is situated just 7 kilometres from the circuit. The city is well served by public transport. To get from the airport to downtown Sochi or the Olympic park, you can take a shuttle bus or travel on the newly-constructed Sochi Aeroexpress railway. Hire cars and taxis are also readily available, though Sochi's numerous parks, beaches and architecture also make it a pleasurable city to walk around.

Find the best hotel and room deals near to Sochi: