Moscow Raceway owes its existence to Russia's desire to host a Formula One race but seems destined to lose out to Sochi and the Igora Drive circuits for the foreseeable future.

Boasting a full FIA Grade 1 Grand Prix layout and and FIM Grade B circuit, the track was initially successful at attracting a range of high-profile championships, from the World Superbikes to World Touring Cars, the DTM and the Blancpain World Series.  One by one these have dropped off the schedule, however, leaving the circuit to host mainly national level events, albeit the most important on Russian racing scene.

Plans for a street race in the Russian capital were first mooted in the 1980s and a Grand Prix of the Soviet Union did in fact make it onto the draft F1 calendar for 1983. However, bureaucratic barriers prevented the Grand Prix from being held, and the race was dropped.

Two decades later, new plans were advanced for a permanent circuit on an island in the Molzhaninovsky area in the north of the city. These received backing from the Moscow mayor, and F1 circuit designer Hermann Tilke was engaged to design the facility. Construction was due to start on November 30th, 2001. However, the mayor rejected the commercial contract offered by Bernie Ecclestone and construction was delayed. It was eventually abandoned altogether in January 2003 and the land turned over to a hotel, yacht marina and golf course instead.

By 2008 momentum had built again for a new project, intended to host both F1 and MotoGP events and located around 90 minutes from the capital. Hermann Tilke was again employed to design the permanent facility. Unlike previous attempts, this project became a reality and on October 1, 2008 a delegation including F1 driver David Coulthard witnessed the ceremonial laying of the first stone.

Construction continued throughout the next few years, supervised by Tilke. After initially signing a deal with Bernie Ecclestone in 2008, the project was dropped from the 2010 Formula 1 calendar in early 2009, and construction stopped. Work resumed in June 2010, with the new contractor agreeing to complete the road section of the track. By September 2011, all asphalt laying had been completed, and construction of the associated pit, support and medical buildings was being undertaken.

When the full circuit and all of its infrastructure was completed in July 2012, it had cost a total of 4.5 billion rubles. Tilke had designed a technical circuit featuring a 873 metres long back straight – among the longest allowable under modern track design guidelines – which would see Formula One cars achieve a theoretical 193mph.

When presented for inspection, the circuit achieved FIA 1(T) status, allowing for Formula One testing and all categories of racing below this. However, the FIM only granted Grade B status, one below the expected level for motorcycle. This still allows for the raceway's inclusion on the World Superbike calendar, though further work will be required before MotoGP could visit.  Subsequently, the track has achieved FIA Grade 1 status, allowing for full Formula One races to take place.

A total of 18 variations of the circuit can be run, from the full Grand Prix course, to shorter 'sprint' variations and a small 'club' circuit utilising the western end only. World Superbikes have utilised the FIM GP course, as has the Renault World Series and WTCC from 2013 onwards (the Renault series' had previously used GP1),  while the DTM makes use of the shorter Sprint Circuit 4.

Tragedy struck the circuit during the first visit of the World Superbike Championships in 2013. During the first lap of the supporting World Supersport race, Italian rider Andrea Antonelli lost control on a slick track during torrential rain. He fell to the ground where he was struck by fellow Italian rider Lorenzo Zanetti, dying from his injuries later the same day. Criticism was levelled at race organisers for beginning the race in such conditions, while the circuit fell under scrutiny for what some felt was inadequate drainage – both claims strongly rejected by championship promoters, Dorna.

The latest images from Moscow Raceway.

Planning a visit to Moscow Raceway? Find the best deals near to the circuit on hotels, apartments and rooms to rent from the map below.

Moscow Raceway is located within 90 minutes drive of central Moscow and 20 minutes drive from Volokolamsk.  Moscow's three international airports are within easy reach of the circuit - Sheremetyevo and Vnukovo are both around a 60 mile drive, while Domodedovo is around 90 miles away.

Travelling by car from Moscow, take Novorizhskoye highway (M9) or Volokolamskoye highway and drive for 60 miles/95 km, and then follow the turn sign for Moscow Raceway.   The journey usually takes 90 minutes.

You can also travel by train from Moscow. Take a train from Rizhsky train station to Chismena (2 hours 10 minutes). During international events free shuttle buses are available from the station to the track and back. 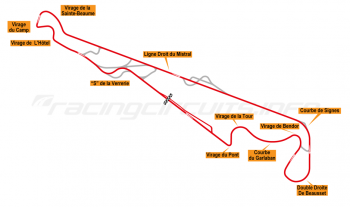 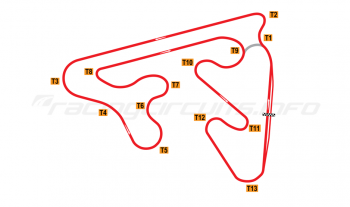 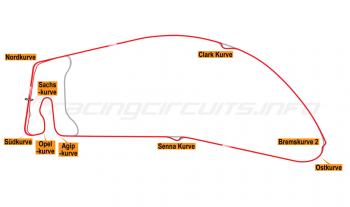