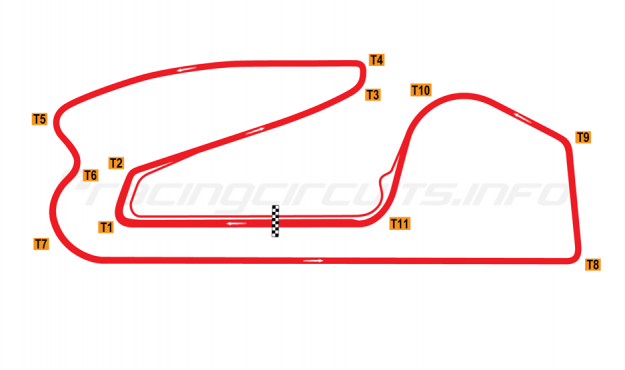 The KazanRing is another Hermann Tilke-designed facility that many will not have heard of. Originally known as Каньон (Canyon-Tatarstan), the track is one of the more spectacular Russian venues, built with the confines of a former sand quarry.

Construction on the track began in 2006, with the basic track layout completed by 2009, although this was essentially just the basic asphalt surface and little in the way of other facilities. After initial use for test drives and track day use, the circuit was finally completed at the end of 2010, when safety barriers and pit and paddock facilities were added, bringing the track up to FIA Grade 2 standards.

The 11-turn course features several long straights and a plunging 'corkscrew-esque' signature corner. Across the course the elevation changes by some 28 metres (hence its original name) and the spectator viewing is good, with vantage points at the top of the former quarry sides offering unobstructed views of the whole course. There are no dedicated stands however and creature comforts can only really be had in the paddock area.

The first competitions were held in 2011 and today the circuit hosts rounds of the major Russian two and four-wheeled competitions, including double rounds of the Russian Touring Car Championship. Local racing is also strong, with an Open Series run for competitors across the Republic of Tatarstan.

The KazanRing is located at Kazan in the eponymous region of Tatarstan, Russia. The nearest airport is Kazan International, located around 45 minute's drive to the south of the circuit and offering numerous domestic connections, as well as departures to regional and several international destinations.

The track can be accessed directly from the M7 motorway (the Kazan bypass) to the east of the city (note that you will need to be heading southbound as you cannot turn left from the northbound carriageway). The entrance is located next to a petrol filling station.

Find the best hotel and room deals near to KazanRing: