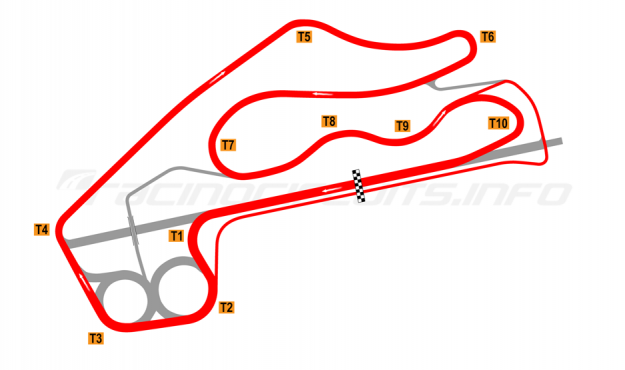 The Fort Grozny Autodrom - often referred to by its nickname of "Fortress Terrible" - is a modern multi-discipline complex in the city of Grozny, which opened in 2015. Built with the support of the Government of the Chechen Republic, it is the only facility of its kind in the region and one of the largest in the North Caucasus.

The main course has two variants, though the 1.918 mile / 3.086 km version is preferred for racing. A figure-of-eight drift area is incorporated within the main circuit, which also shares part of the 870 metre drag strip as its start-finish straight, though the staging area remains separate.

The areas climate provides favourable weather conditions which allow year-round running - when snow comes, the circuit is used for ice-racing and winter driving events. The first full season of competition in 2016 started in late January and ended in December, with more than 70 events held during that period.

Today the circuit hosts rounds of the major Russian series, including the Russian Circuit Racing Series, which made its debut in 2016. It has also hosted the Czech Republic karting series, while there are numerous drag and drifting events throughout the year.

Fort Grozny Autodrom is located at Grozny in the Chechen Republic, Russia. The nearest airport is Grozny Airport, around 20 minutes' drive north, which has connecting flights to a number of domestic airports and to Turkey.

The circuit is located on ul. Khimikov (ул. Химиков) on the western outskirts of Grozny. Head out of the city centre on ul. Mayakovskogo and onto Industrialnaya ul. until you reach ul. Khimikov.

Find the best hotel and room deals near to Fort Grozny Autodrom: