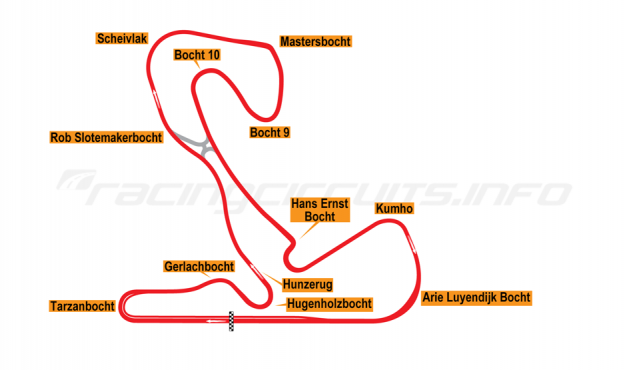 Zandvoort has been the centre of the Dutch racing scene and its most important circuit (at least for four-wheeled racing) since the late 1940s; helping put the seaside resort town on the world stage.

Nestling among the sand dunes the town is named after, the circuit owes its origins to a far-sighted local official. Mayor H. van Alphen saw the potential for racing to transform the fortunes of the town after a street race in 1939 proved a success. He began planning a permanent facility, but the outbreak of war brought a halt to such aspirations. Nevertheless, Mayor Alphen continued to quietly pursue his ambitions, telling the Germans he would like to hold a parade for the winners of war, for which they built a new road – little did they realise this was a ruse to avoid locals being sent to Germany to work as prisoners of war.  Instead, the road they crafted would eventually form the main straight of the new circuit!

With the war over, the town began rebuilding and the new circuit was integral part of the plans. A panel of experts was formed by the  Dutch Automobile Racing Club to look at linking the parade route with other trails through the dunes to create a circuit.  Former Bentley Boy Sammy Davis was brought in as a consultant on the layout (and not John Hugenholtz Sr. as is sometimes credited – while he was the founder of the automobile club and would go on to be appointed as circuit director and have a long association with Zandvoort, he was not instrumental in the laying out of the circuit).  The result was a semi-permanent course, modern in amenities and twisty – but still fast – in nature. The pit structures, main grandstand and asphalt surface were completed in time for the inaugural race to take place on August 1948.

From the outset, Zandvoort was popular with the drivers and teams, and was often used for testing as well as racing. Formula One was quick to adopt the course, organising the first Dutch Grand Prix in 1952, following on from non-championship events held in previous years. Zandvoort would remain a permanent fixtures on the F1 calendar until 1985.

Gradually, the circuit became a fully enclosed venue, as the public roads which formed part of its routes were closed off. There were no other significant changes in this period, save for the installation of a dividing pit lane wall in 1968 and the erection of Armco barriers around the perimeter in 1972.

Speeds grew ever higher and by the beginning of the 1970s the circuit suffered a number of tragic fatalities, which tarnished its reputation and led to calls for change. Two English drivers lost their lives at the fast Tunnel Oost kink – Piers Courage in 1970 and Roger Williamson in 1973 in a horrific fiery crash, when his car overturned and marshalling and fire procedures proved grossly ill-prepared. Fellow competitor David Purley struggled in vain to free his friend, before having to beat a retreat in despair.

It was clear changes would be required if Formula One was to return and circuit authorities complied, with a reconstruction of the fast Bos In corner into an S-bend named Panoramabocht. This became popular with spectators due to the overtaking that became prevalent at this spot.

Further safety changes were demanded by the end of the decade, with the clumsy new chicane added at the Hondenvlak esses. This was hastily completed in time for the Grand Prix, with input from drivers Niki Lauda and Jody Scheckter: it's probably fair to say they proved better drivers than circuit designers! The chicane was not a success and by the following year the Hondenvlak esses were no more. In their placed was a new chicane section, named after the Marlboro cigarette concern which had become a naming sponsor for the resulting corners.

Sadly, the costs of running a Formula One event and ever-more stringent safety requirements proved a drain on resources. With no funding for changes and a debt from the previous year's race, the 1985 Grand Prix would prove the circuit's last F1 event for 35 years, Niki Lauda taking what was also to be his swansong victory.

With financial problems increasing, there were a number of attempts to close the circuit. Even from the earliest days, the track had had its opponents in the local government and complaints about noise were often cited. A serious proposal to close the municipally-owned facility in 1982 drew strong protests and resulted in heavy losses in the local council elections for the ruling party. Zandvoort was saved in the short term, but with the financial losses mounting, a proposal in 1985 to sell off part of the land nearest the town to build a holiday resort were approved.

To keep the circuit viable on the remaining land, the authorities proposed a much shorter layout , similar to one first suggested in 1978, which would feature large earth banks to shield the town from vehicle noise. These plans were approved in January 1987, only for the circuit to be declared bankrupt in June.

In September 1987 a new foundation company was established to take over running of the circuit and, with the funds from the sale of the land, plans for the short course were finalised. This was to be an interim measure, until circuit funds had stabilised. Bulldozers finally moved in in mid-1989 and the new short course quickly emerged. A section of the old course from Hunzerug to Schievlak and the Marlboro Corner remained, locked away and dormant, while the rest of the old course was transformed into a golf course and holiday villas.

At only 1.5 miles in length, the new Zandvoort was a pale imitation of its previous incarnation, but at least racing had been saved among the dunes. A new left hand bend at Hunzerug led to a twisty chicane section before a short straight took the cars to a new Bos Uit corner, which rejoined the main straight closer to the pits.

A new annual event, the non-championship Marlboro Masters of F3, was launched in 1990 and soon became the circuit's biggest draw, attracting all of the up-and-coming stars of European racing. This brought much needed funding and prestige back to the circuit and bit-by-bit the facilities were improved. Circuit finances had recovered to the extent that the long planned extension could become a reality. The first sign of change came in 1998 when new pit buildings emerged and by the following season the extensions had been completed.

The new course once again featured the demanding Slotemakerbocht and Schievlak corners, before turning sharp right into a new loop at the remnants of the former Marlboro Corner; in deference to modern sensibilities around tobacco sponsorship, this was now known as Mastersbocht. A straight then rejoined the short course ahead of the Nissan chicane – which was subsequently renamed the Audi-S as a result of a new sponsorship agreement. In time this changed again, the corner now being named after a former circuit director, Hans Ernst.

The extended layout has seen major championships return to Zandvoort. The A1 GP Series held wildly popular races here during its short lifespan, attended by up to 120,000 spectators. The DTM touring car series also made it an annual trip to the seaside between 2001 and 2013, while the FIA GT Series and its later Blancpain variants have also now become firmly established.

Still there were concerns as to Zandvoort's future. Court orders reducing the number of 'noise' days led to the Masters F3 event switching to Zolder in Belgium for two years, while the Provincial Executive explored the possibility of creating a replacement course at Julianadorp in the north of the country. These plans came to nought and some form of stability has since been secured with the signing of a new lease on the land, which should racing continue through to at least 2041.  Further security came in early 2016 when the facility was bought by Chapman Andretti Partners, a company formed by entrepreneurs Menno de Jong and Bernhard van Oranje, the latter of whom is a Dutch prince and some-time GT racer.

In May 2019, the return of the Dutch Grand Prix was announced, with Zandvoort being awarded a new deal for at least three years, with planned return of Formula One to the track in 2020 after a 35 year break.

To bring the circuit up to F1 standards, a programme of works at key corners was undertaken, to both improve safety, speed up certain sections and generally improve the flow of the lap, reducing some of the current stop-start nature. A new paddock and other infrastructure developments were also announced.

Key changes have involed a move of the start/finish towards Tarzan corner, to ensure that the grid is clearly visible from the main grandstand. The exit of Gerlachtbocht was widened for safety reasons, and the Hugenholtzbocht has been treated simlarly on its inside to allow more space and deliver higher speeds going towards Scheivlak.

At the Hans Ernst Bocht, the second part of the chicane is now shortened and widened to improve flow through the corner, while the Arie Luyendijkbocht has seen the most dramatic changes, being both widened slightly banked to permit full-throttle racing. A SAFER barrier has also been fitted on the outside turn wall.

The circuit revisions were penned by Jarno Zaffelli and the buidling works overseen by the Italian's circuit design specialists Dromo, who have confirmed that the intention was to make the updates as minimal as possible to retain the full character of the circuit.

The revived Dutch Grand Prix was scheduled to place on May 3, 2020, however was one of the early casualties of the COVID-19 pandemic, being postponed in March 2020, before being cancelled altogether later in the year. Instead, the new layout was christened by the Historic Grand Prix and SRO GT World Series. The Formula One race is now scheduled to make its reappearance in September 2021.

CM.com Circuit Zandvoort is located in the seaside town of Zandvoort, approximatley 30km from Amsterdam.  The nearest international airport is Amsterdam's Schipol Airport, approximately 30 km to the south-east and around 35 minutes drive from the circuit.

The circuit can be reached by road from Amsterdam on either the N200 or N201 roads, while Zandvoort aan Zee railway station is a short walk from the circuit, while regular bus services also operate from Amsterdam centre.

No navigation? On highway A9, follow the signs for Zandvoort (via exit Haarlem-Zuid –N205) and proceed to the N201 in the direction of Zandvoort. You can alternatively take Haarlem exit on the A9 (via the A200) to drive via the N200 to Zandvoort.

Pay attention to the website during special events. In some cases, an adjusted traveling advice will be given. Always check the webpage of the specific event for the latest advice.

Find the best hotel and flight deals near to Zandvoort: