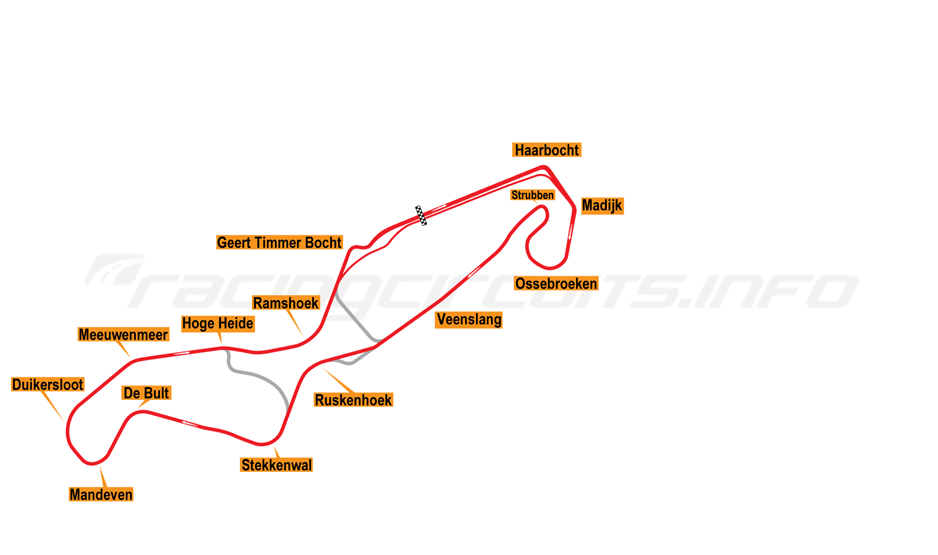 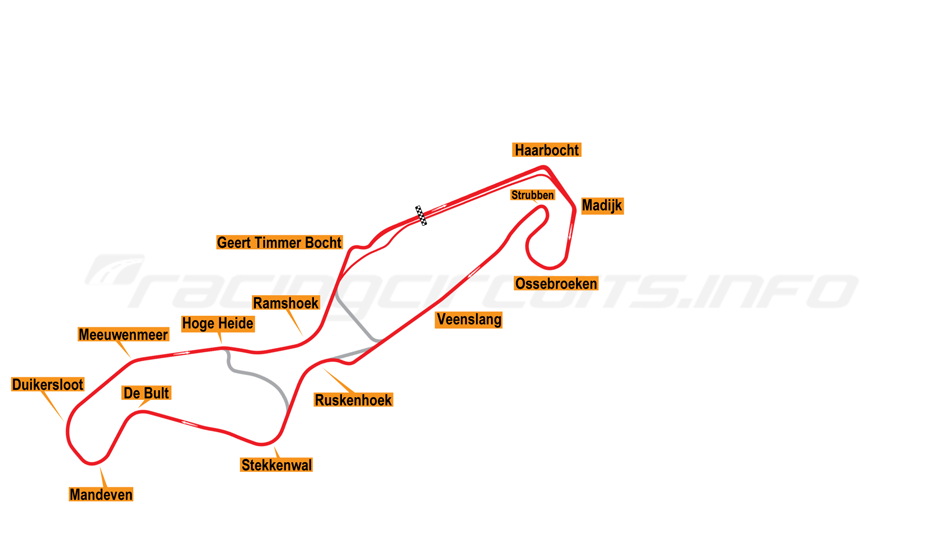 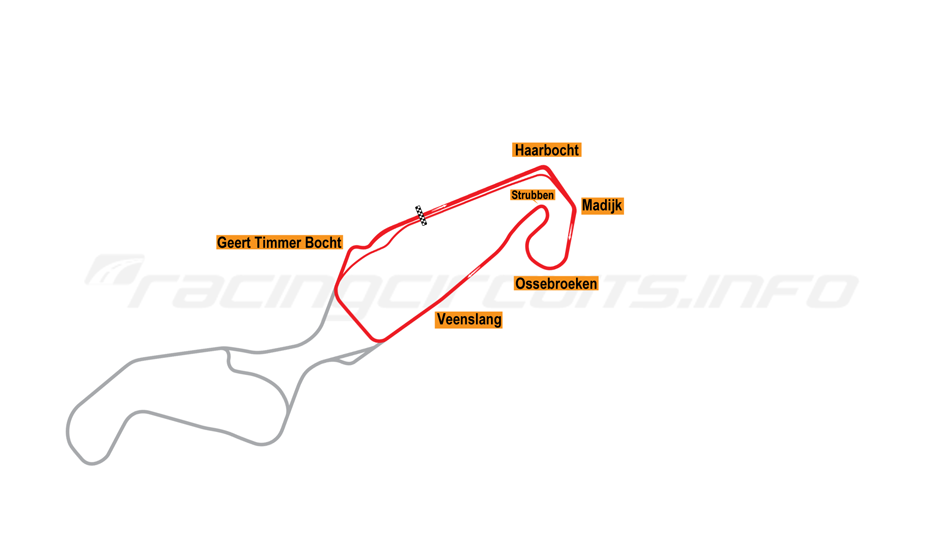 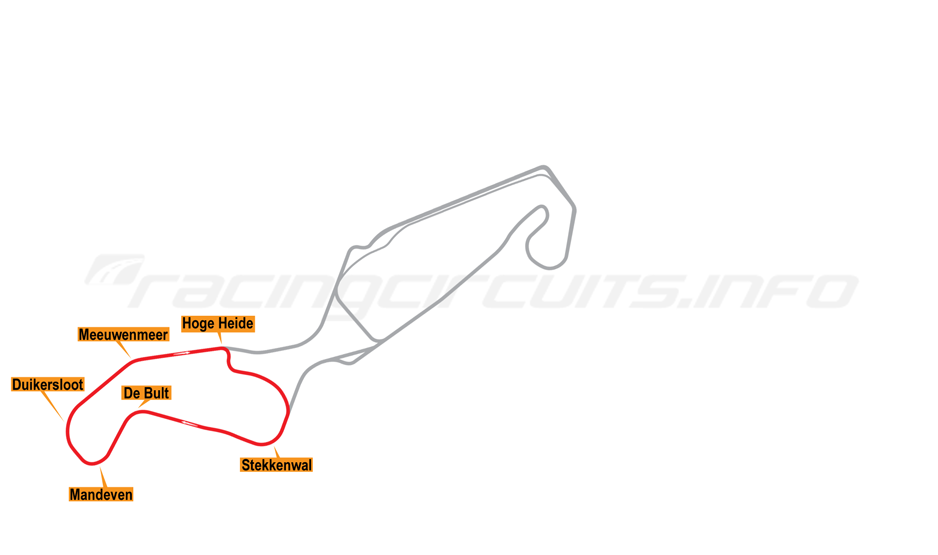 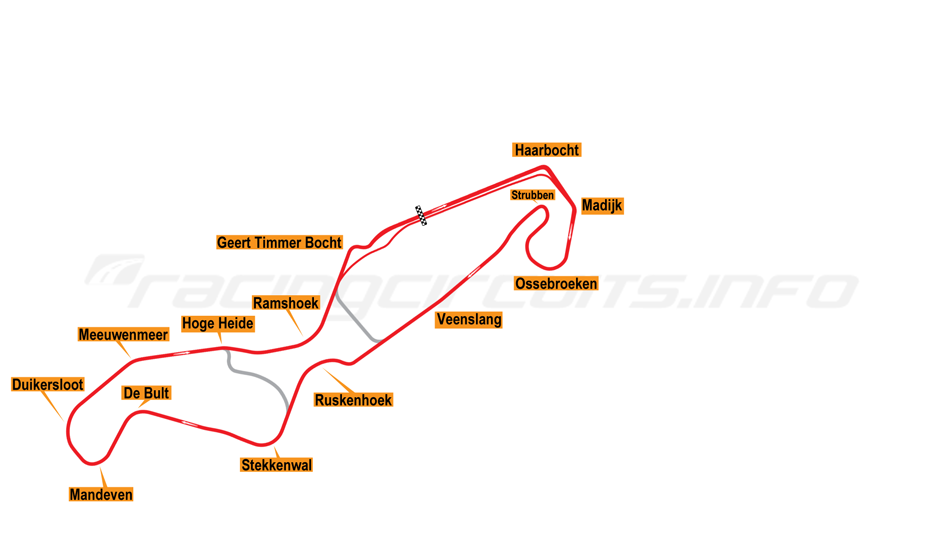 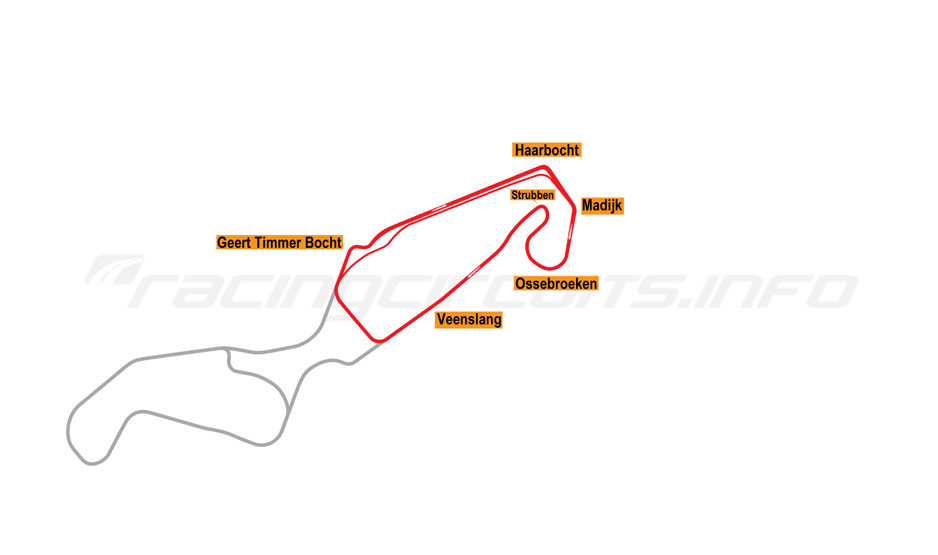 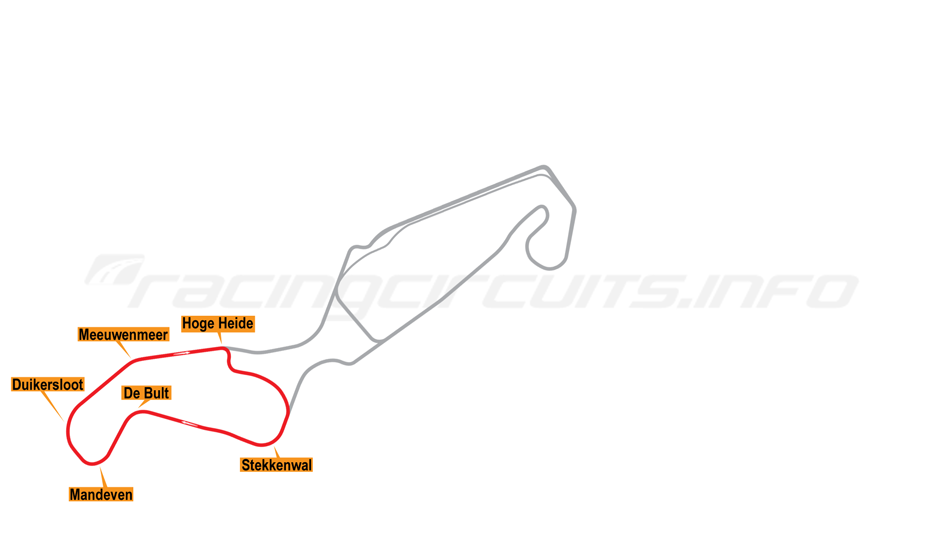 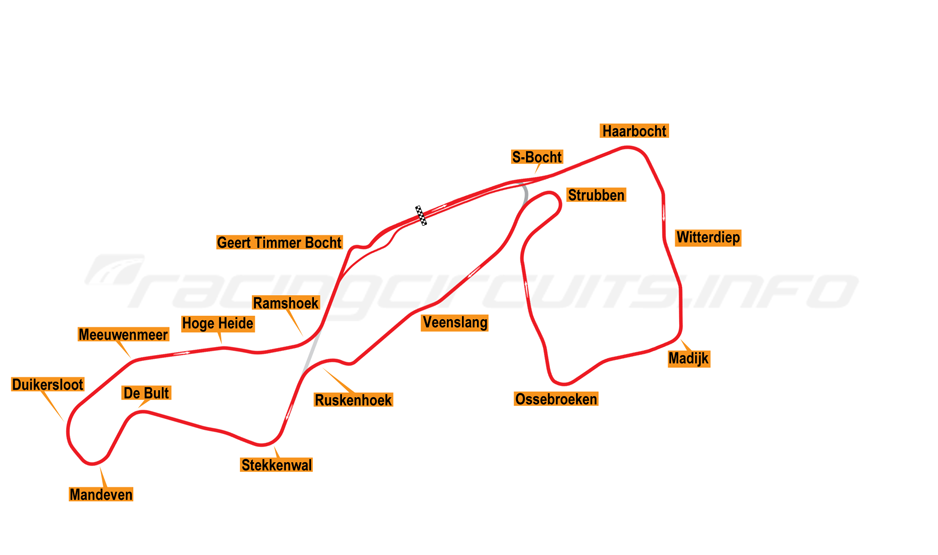 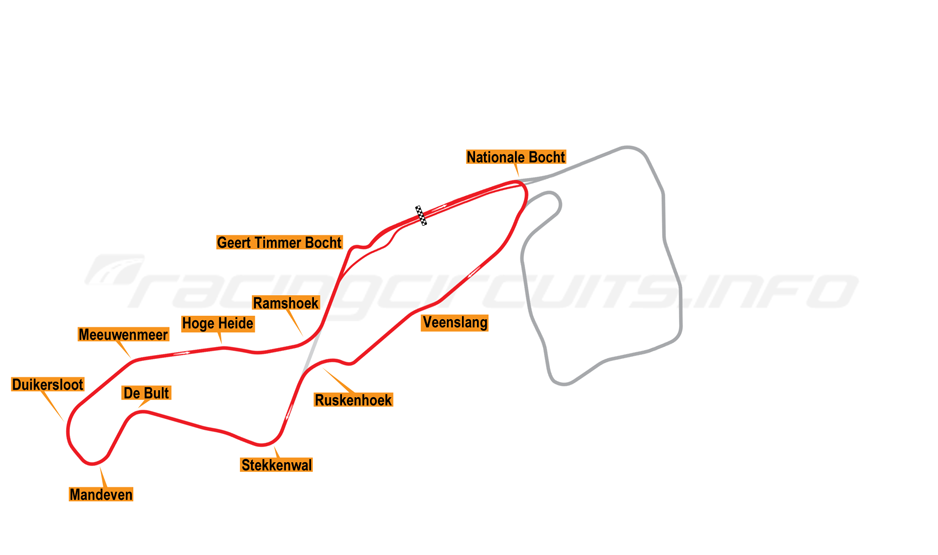 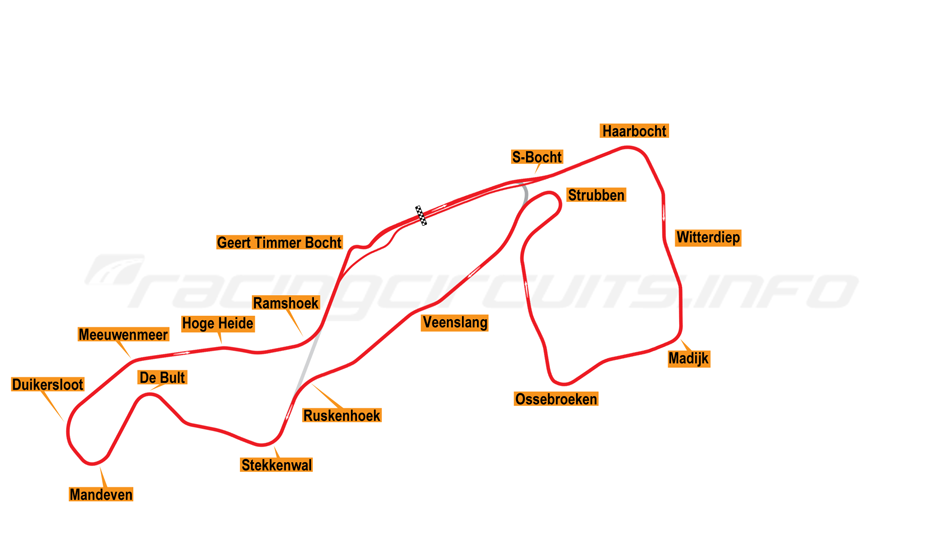 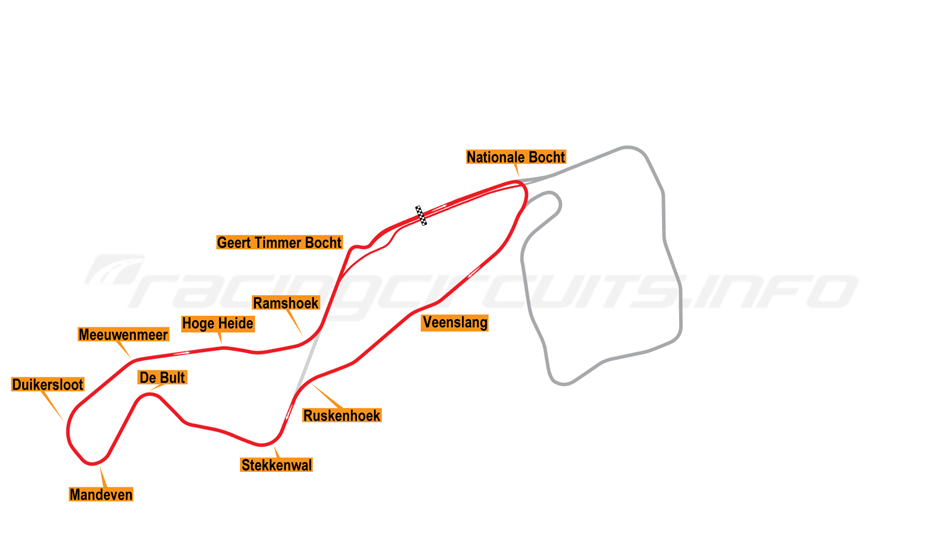 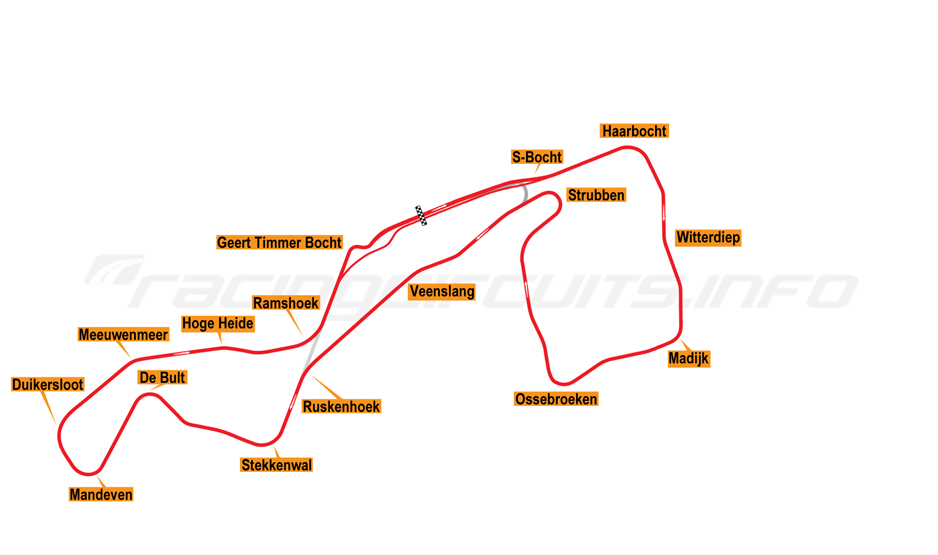 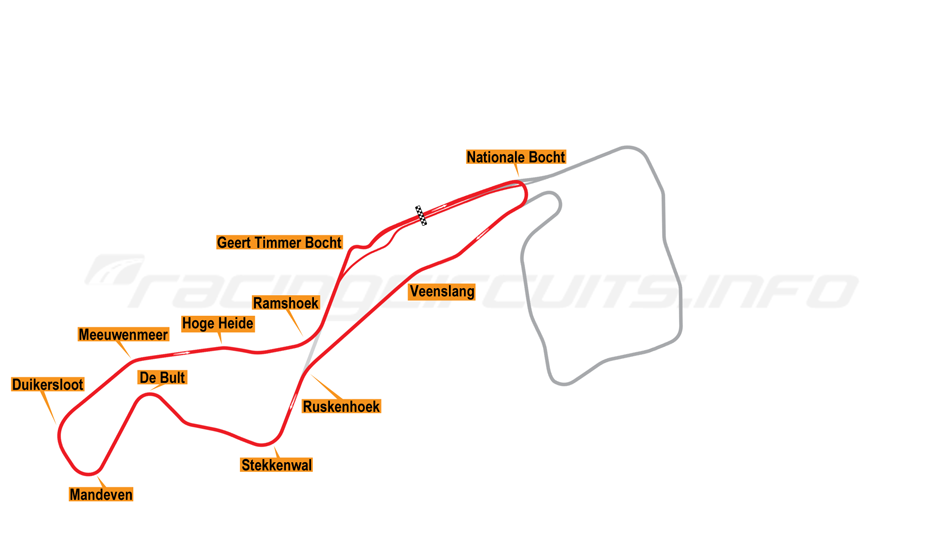 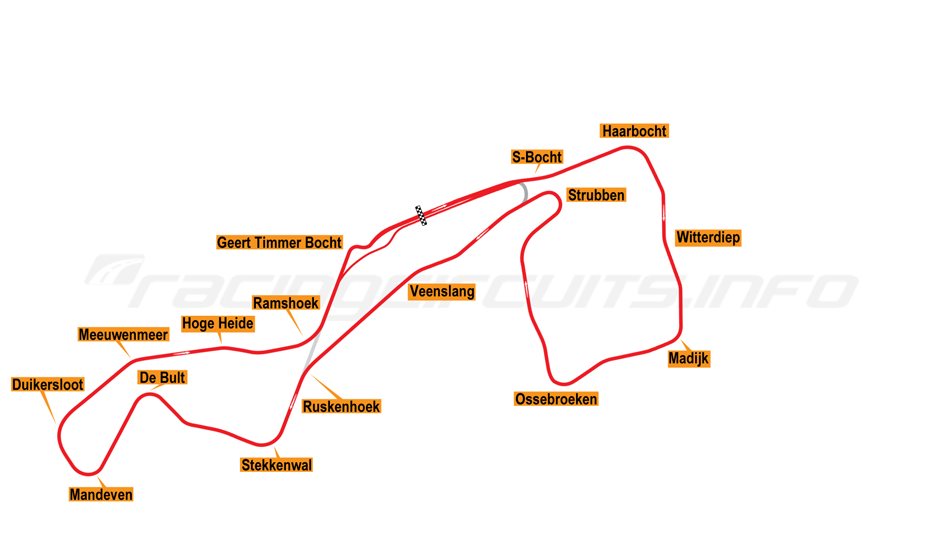 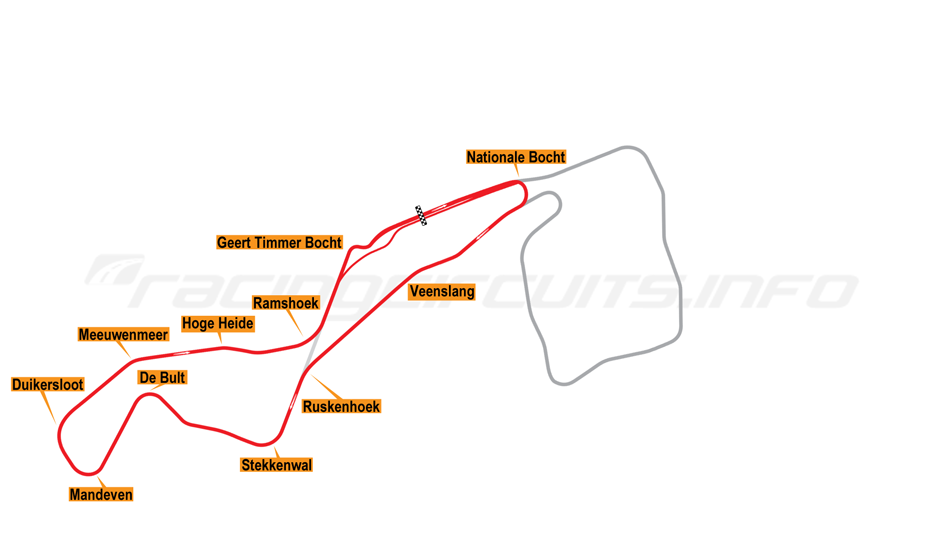 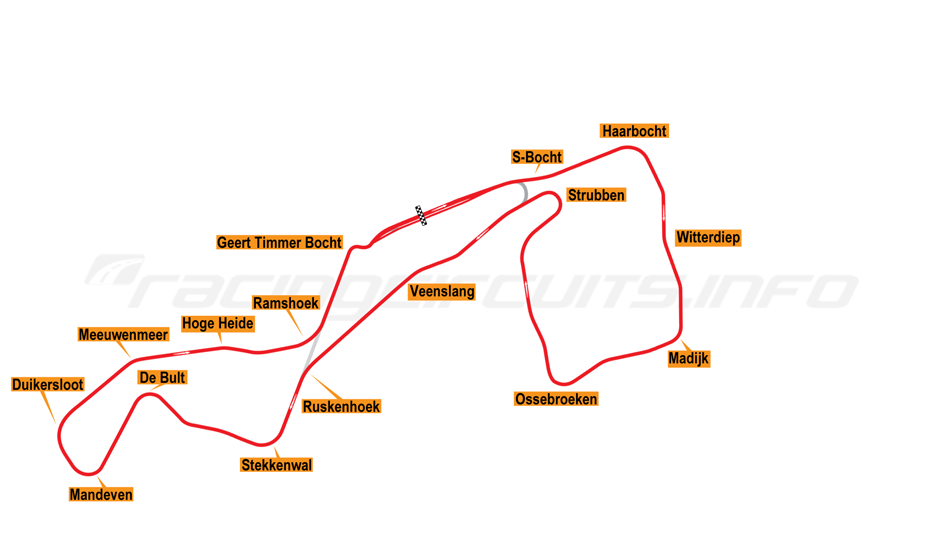 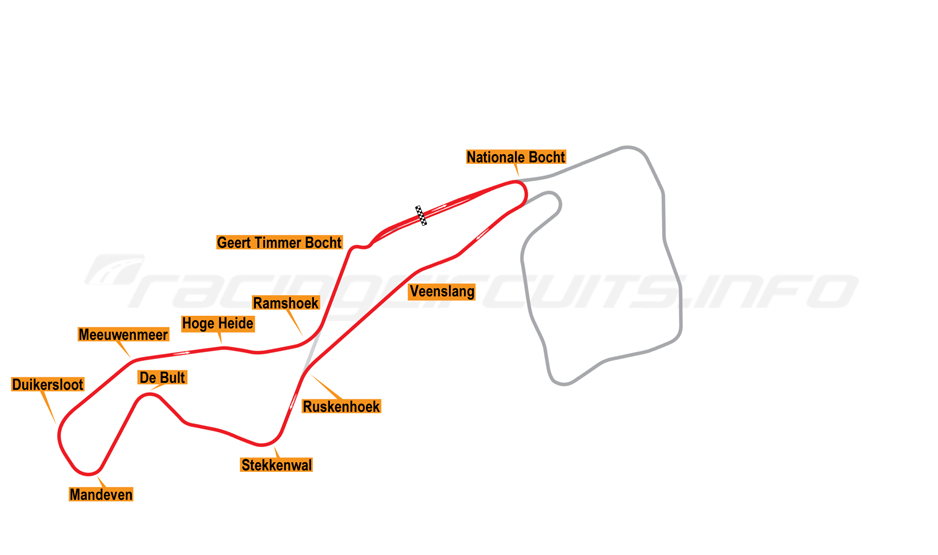 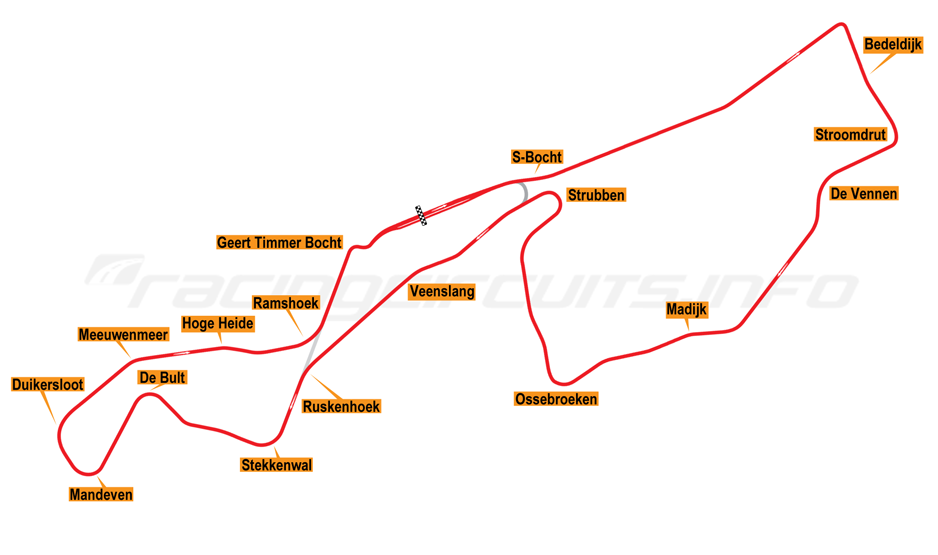 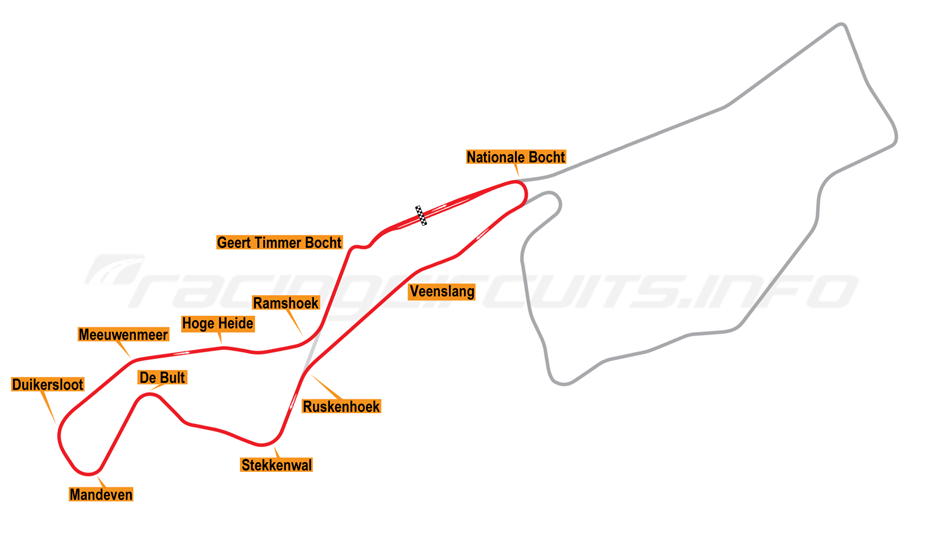 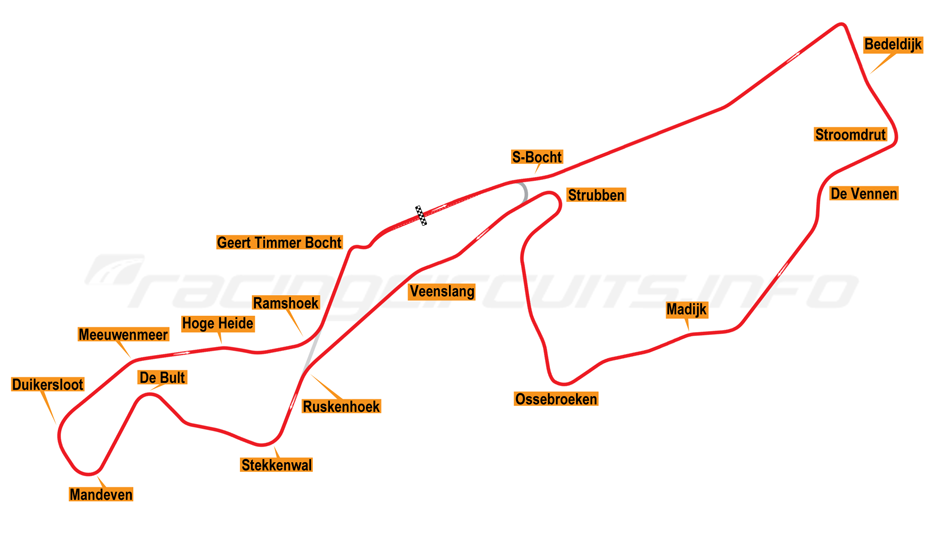 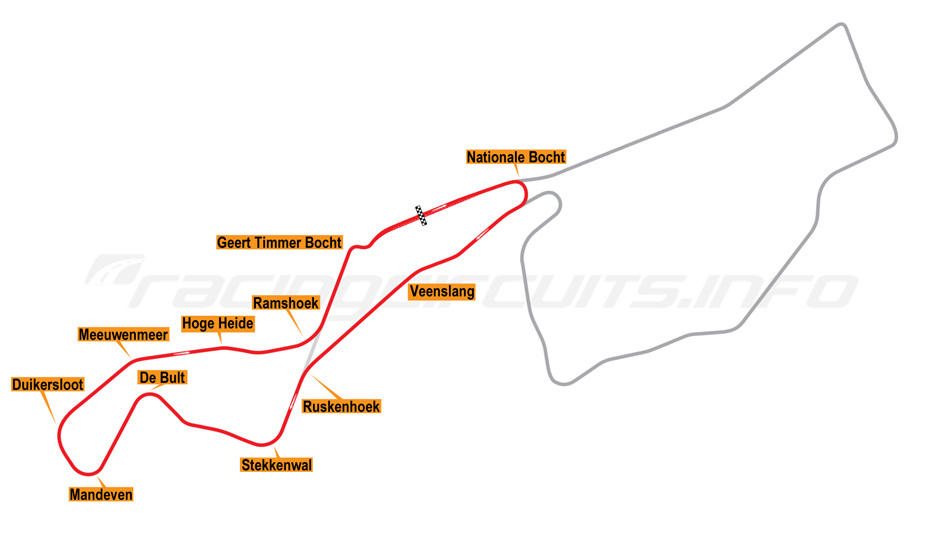 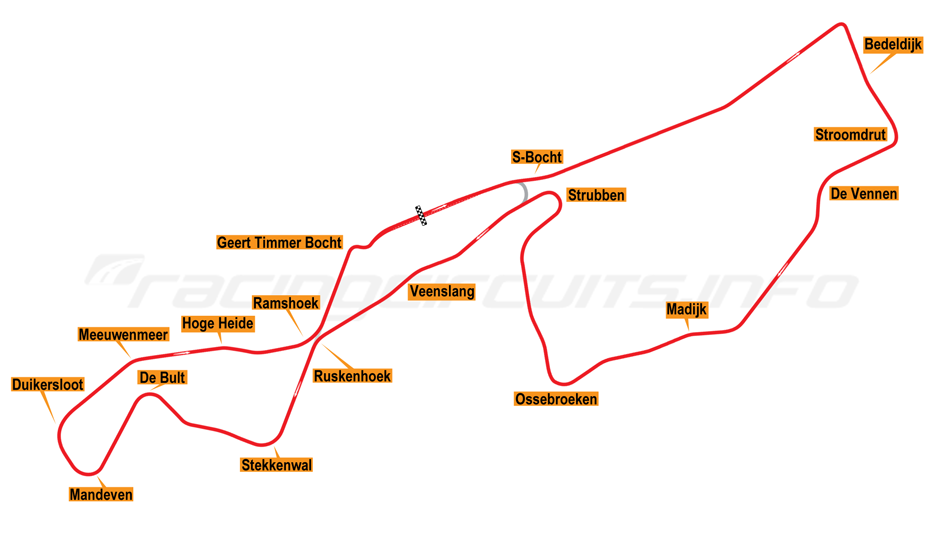 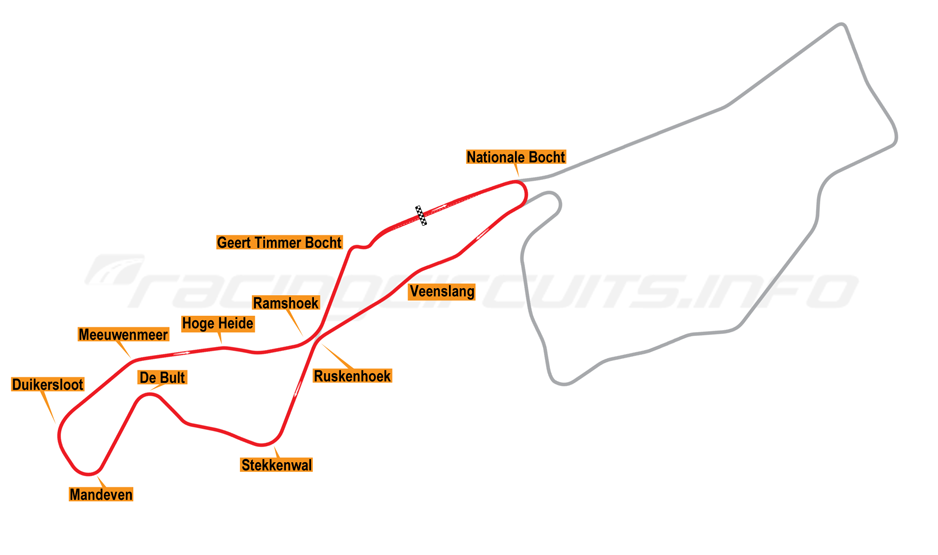 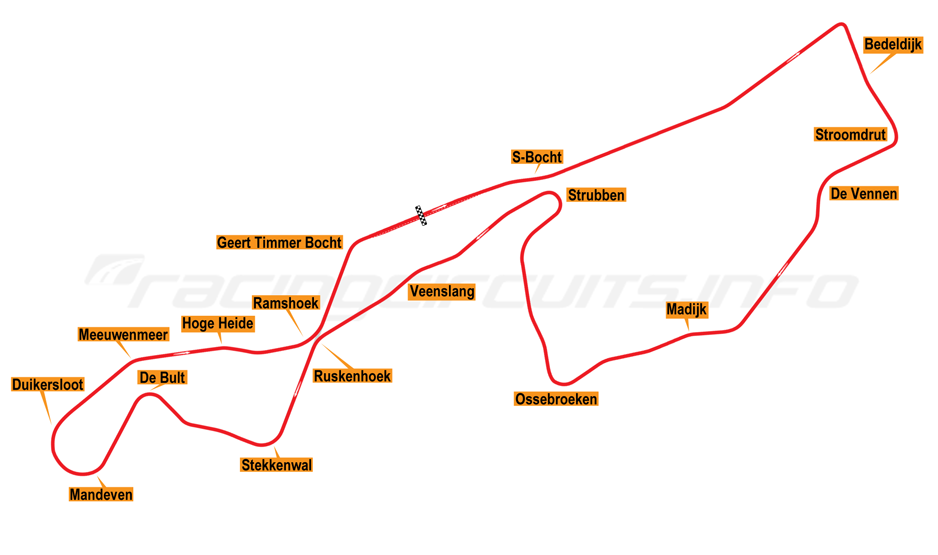 The TT Circuit Assen (or Circuit van Drenthe as it was originally known) is a mecca for motorcycle racing, as important for the two-wheeled brigade as Indianapolis, Le Mans or Monaco is to those on four wheels. Winning here is an achievement that racers treasure above almost all others.

Transitioning from a classic road course into a fully permanent motorsport venue, the circuit has undergone huge changes from the 1980s onwards.  This has helped secure its future as the venue for the annual Dutch TT, which remains a round of the MotoGP World Championships, as well as a World Superbikes round.

Today it is equally at home hosting races on four wheels as it is on two, with visitors in recent years including Champ Cars, the Superleague Formula, the DTM and the TCR Europe championships.

Racing in this part of Holland has a long history. The original Assen track was first used for the 1925 Dutch Tourist Trophy. The race organisers were taking advantage in a relaxation of Dutch laws, which allowed racing on closed courses for the first time. Held on brick-paved country roads through the villages of Borger, Schoonloo and Grolloo and organized by the Motorclub Assen en Omstreken, the first event was won Piet van Wijngaarden on a 500 cc Norton - only three other bikes were classified as finishers.

The course had a length of 17.75 miles (28.57km) and was characterised by long straights and fast kinks, with some sections unpaved and others finished in brick. Several sections were also very narrow; at two points on the course the bikes passed over bridges that could only accommodate competitors in single file.

The TT is born

While a crowd of 10,000 was thrilled by the speeds and sounds of the first event, it was clear that a better course was needed. With the local government of Borger unwilling to pay for a complete paving of the course, a switch to a new circuit was put in place for 1926, this time closer to Assen itself. Roads through the villages of Hooghalen, Laaghalerveen and Witten formed a roughly rectangular course, named the Circuit van Drenthe.

The new course was 10.335 miles (16.536 km) long and like its predecessor featured long fast straights, but considerably wider roads. After a disappointing start which saw small crowds, the event attracted international status and soon its fortunes improved, with spectator numbers growing year on year to unprecedented levels. From 1936, the event was officially titled the 'Dutch TT' and, after a five year hiatus during World War II, racing was swift to resume in 1946. In 1949, the event became a fixture on the first Motorcycle World Championship, a position that it has – uniquely – retained every year since.

By 1955 the organisers decided a new course was needed, with purpose built sections linking some existing local roads to form a more compact, semi-permanent course. The official reason given was the building of a new highway from Assen to Hooghalen, which would slice through the existing course at its northern end. Conveniently, this also removed parts of the circuit on land under jurisdiction of neighbouring town Beilen, meaning Assen got to keep all of the spoils of the popular event...

A new home is built

In a record time of just four months, the new 4.8 miles (7.705km) course sprang up in time for the TT races. The 500cc feature race was to prove controversial, however. After a warm up lap, the riders pulled off, demanding a greater share of the revenues after seeing the massive size of the crowd. After threatening to strike, the organisers came to an agreement and the race finally got under way, Geoff Duke motoring to victory on his Gilera.

So the classic TT course was set and for 20 years it remained largely unchanged. Riders rated the once-a-year course as among the most demanding, with its combination of cambered roads, fast sweeping curves and slower banked corners. The first noticeable changes came in 1976, when a chicane was inserted at the final corner and a new short course was created by adding a new 180 degree turn which linked the main straight with the Veenslang. Mandeven and Duikersloot corners were also modified to provide greater run off.

The famous Ruskenhoek corner was modified in 1981, moving it further away from Ramshoek on the return loop, while a new pit complex was constructed the following year. This featured, for the first time, proper garages and a pit lane separated from the main track and did much to bring facilities for the teams and riders up to contemporary standards.

The northern loop gets the chop

In 1984 there was major change when the northern loop was halved, making the full course almost a mile shorter. Gone were great corners like 'Bedeldijk', 'Stroomdrift' and 'De Vennen', in their place coming a series of sweeping technical corners, overlooked by large spectator banks.

Minor modifications to the pit lane entry and exit aside, the next major change came in 1999, when the circuit was modified with a new grandstand, control tower, press centre and renovated pit garages. Then in 2002, the Veenslang (from Strubben corner to Stekkenwal) was moved some 50 metres further to the east to create room for an enlarged paddock area. At at the southern end of the track, Mandeveen and Duikersloot were also moved some 10 metres further inwards to enlarge the run-off area and gravel beds. The National Circuit portion of the course was also completely resurfaced.

The world's first 'floating' grandstand was installed above the final corner run off area in time for the 2005 season, while plans for another extensive remodelling of the northern portion of the track were announced in order to improve the circuit for car racing and release land for hotel, bowling alley, museum, spa and fitness centre and merchandising centres. Completed in two phases, the first saw the remodelling of the De Bult corner to provide more run-off and a further re-alignment of Ruskenhoek in 2005.

The second phase was more fundamental, with the 1984 northern loop largely obliterated to create the new stadium section. Gone also was the famous S-Bocht, replaced by an extended main straight and a new sweeping first corner. The Veenslang was also straightened, eliminating the kink over the tunnel. New sections of track allowed for new northern and southern short courses to be installed, capable of running simultaneously.

More recently, the Ruskenhoek section was modified one more time in 2010, with the bike course diverted to avoid the chicane, speeding up the lap times slightly. The chicane was retained for use in four-wheel events.

The new Assen still managed to retain its essential character, though there were plenty who felt the latest revisions presented a lesser challenge than previous iterations. However, the changes now mean it has an expanded calendar of events on two and four wheels in order to sustain its future as an important centre for Dutch motorsport.

Planning a visit to TT Circuit Assen? Find the best deals near to the circuit on hotels, apartments and rooms to rent from the map below.

The TT Circuit Assen is located to the south of the town of Assen in northern Netherlands.  The nearest international airport is Groningen Airport Eelde, around 15 miles to the north

The circuit is located 2 km south-west of Assen, near to the A28 motorway from Amersfoort to Groningen. 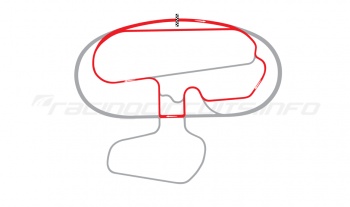 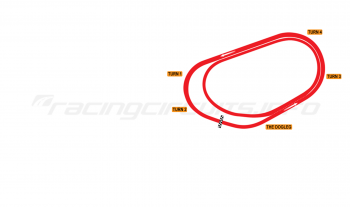 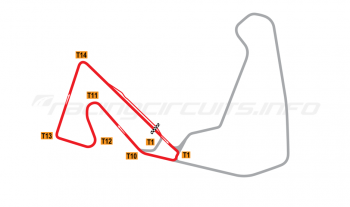