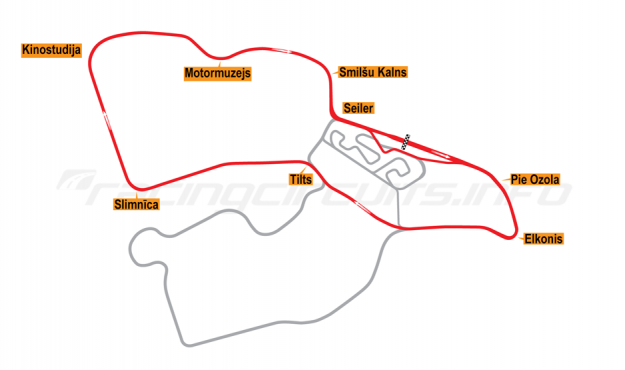 Biķernieki is Latvia's only permanent motor racing circuit has been undergoing a revival in recent years, with track improvements and safety upgrades brought in part by the advent of its hosting of World Rallycross. Flourishing once again as a hub of regional racing, the Biķernieki complex appears to have a bright future once more.

The idea of first creating a track on the outskirts of the Latvian capital Rīga was first suggested in the 1950s. A temporary course around Meza Park was being used into the mid-'60s but even as this was in operation, the local car enthusiasts were planning a replacement. With the support of the Republican Federation of motorsport, between 1958 and 1961, motorcycle racers Eduard Kiope and Kārlis Ošiņš began a tour of other facilities across the Soviet Union to get a measure of what would be required to create a good circuit.

Returning to Rīga, they selected a site within Biķernieki forest on the outskirts of the city, partly due its proximity to the large population and partly for the role the surrounding forest would have in reducing noise nuisance. It was also felt that sections between the trees would help to reduce crosswinds which were dangerous for motorcycle racers.

In 1962, the track designers began their work under the direction of chief engineer Peteris Dzenis and with the support of the Ministry of Road Transport and Highways of the Latvian SSR. It was decided that the circuit would actually comprise two distinct layouts, with shared pit and paddock facilities. The 'Ring of Skill' (Meistarības Aplis in Latvian) would primarily be aimed at motorcycle racing, while the 'Speed Ring' (Ātruma Aplis) would be more suitable for car racing. The two elements could be joined together to create a larger 'Big Ring' (Lielo Apli), with corners of varying radiuses, without long straights but with some elevation changes which made the most of the topography of the forest. A fourth, short course, referred to as the Oval course (Ovāls) was also possible.

Design work was completed in January 1965 and the Ministry of Road Transport and Highways of the Republic formed a committee for the construction of the complex Biķernieki. In reality, much of the work was actually performed by volunteer enthusiasts, including drivers, members of the Central Motor Club and students of the Rīga Polytechnic Institute.

There were major difficulties to overcome. Considerable logging was required through the forest to create the path for the two circuits, while the area of the pits, paddock and associated kart circuit proved to be exceptionally marshy, thanks to a number of underground springs. Complete draining was required, with excavations down to seven metres then filled with huge amounts of sand. Nevertheless by the autumn of 1965 work to lay the asphalt on the 'Ring of Skill' began, with the final work to make it suitable for racing being completed in June 1966.

The first competitions, for both motorcycle and cars, were held at Biķernieki on 30-31 July 1966 on the newly-completed 'Ring of Skill'. Kiopa and Osins were among the winners on two wheels, while Jakov Sisman (Group A - GAS 21) and Bruno Erdmanis (Group B - Moskvich 407) took the car races. Soon all racing would transfer from Meza Park, including the famous Amber Trophy races for Volga cars, which saw the best drivers from across the Soviet Union competing in what became Biķernieki's signature event.

All the while, work continued on the second phase of the project and the 'Speed Ring' was completed in spring 1968. Its first race was the opening round of the Baltic Republics Championship, held on June 2. Vladimir Glurdzhidze took the Formula 3 race in a Melkus 65 - Wartburg, though the event was overshadowed by the death of Estonian drive Ants Seiler, who crashed on the final corner, which would later be named in his memory. In August, the 'Big Ring' also opened for use for the first time.

In the years following, Biķernieki established itself as the premier motor racing facility in the whole of the Soviet Union, helped by a well-constructed track, good organisation and the close proximity of the Baltic states. Car racing concentrated almost exclusively on the 'Speed Ring', while motorbikes tended to use the 'Ring of Skill', though would occasionally take to the full circuit or the 'Speed Ring'.

During the 1970s. there was a gradual improvement of the sports complex. In 1974, near to the start-finish straight, a stadium was built for the locally popular sport of motoball (essentially, five-a-side football played on motorbikes). Two years later a speedway track was added around its perimeter. That same year spectator bleachers were put up at several corners (Pie Ozola, Elkonis and Slimnīca) with concrete walls or embankments in front to protect them.

By the end of the decade, a new threat had emerged with the construction of a new housing development close to the eastern edge of the forest. The numerous apartment blocks, built in the standard Soviet style, ran alongside the Speed Ring and start/finish areas and it was not long before noise complaints were being registered. The solution was to impose a 90dB limit on all competitions, with the threat of disqualification on any vehicles breaking the limit. Testing outside of race weekends was also not no longer permitted.

In 1981, along the route of the site closest to the residential buildings (Pie Ozola and Elkonis corners) a noise protection wall was built, though the threat of enforced closure still hung in the air. It took the intervention of the Volunteer Society for Cooperation with the Army, Aviation, and Fleet (DOSAAF) and the Republican Ministry of Road Transport and Highways to put a final full stop on these rumours, securing the circuit's immediate future.

Upgrades were made in 1984 to bring the circuit up to FIA standards in order to return the track to the schedule of the Friendship of Socialist Countries Cup. Concrete walls and chain link fencing were installed at key spots (it would eventually extend around the length of the whole lap of both courses by 1987), run-off areas were expanded and an electronic scoreboard and speed trap display were also added along the start-finish straight.

Then in 1987, the kart circuit was rebuilt to a new design to bring it closer to international standards, which also involved the creation of an extended pit lane and revised paddock arrangements. Elsewhere, the construction of new stands at Pie Ozola and Elkonis corners began, which not only provided better facilities for spectators, but also provided an additional and more effective sound barrier.

The construction of the stands was completed in 1989 and in the same year, work began on similar stands at Seiler and Smilšu Kalns corners, though only a portion of the construction at the Seiler corner was ever completed. Likewise, plans for new race control buildings and a media centre were never realised, as the Soviet economic situation grew increasingly worse.

By the end of the 1980s, the political and economic situation across the USSR had deteriorated significantly and, unsurprisingly, few funds were available for motorsport. Even the Amber Cup had faded from prominence, with its last race held in 1991. Following Latvia's de facto independence that same year, the circuit went into a period of gradual decline, in common with many of the circuit's across the former USSR.

Happily, the track's good initial construction, interesting layout and location with the Baltic region would prove its saviour. In 2011, the circuit passed into the care of the CSDD (Road Traffic Safety Directorate) and much effort has been made to restore its former glory.

The speedway track and its grandstands have been restored, the race control building has been reconstructed, the main straight and first corners have been repaved in 2015, the kerbs have been changed and the track infrastructure has been improved.

That same year the circuit was announced as the host of the Latvian round of the FIA World Rallycross Championship from 2016-18. Experienced circuit design specialists Apex Circuit Design were brought in to design the course for World RX, which utilises part of the main straight and kart area, along with a newly-constructed section featuring a jump.

Swiss safety equipment manufacturer Geobrugg also gifted the track its latest design of double reinforced concrete barriers, which extend from the pit lane and around the first two corners of the course. Barriers similar to these will soon also be added at several Norwegian and Chinese motorsports tracks as a result of the interest shown in the Biķernieki installations.

All of the improvements have borne fruit; Biķernieki is now enjoying and international profile for the first time, while its place as a significant centre for regional racing has now been fully restored. Even the Amber Cup is back - revived in 2011 in time for the circuit's 45th anniversary.

Motorsports are also not the only competitive actions hosted by Biķernieki. Year round runners, cyclists and rollerbladers enjoy the course, while in winter, the Biķernieki track becomes a cross-country skiing complex.

Biķernieki circuit is located in the Mežciems district of Rīga in Latvia. The closest airport is Rīga International, around 30 minutes' drive away on the other side of the city.

Typically, the trip from city centre to the track will take around 20 minutes. In weekend traffic it might even take a little less time, but during rush hours in the working days it can take 30-40 minutes or more.

A taxi ride from the centre of Rīga to Biķernieki track will cost around 10 to 15 euro.

Find the best hotel and flight deals near to Biķernieki: