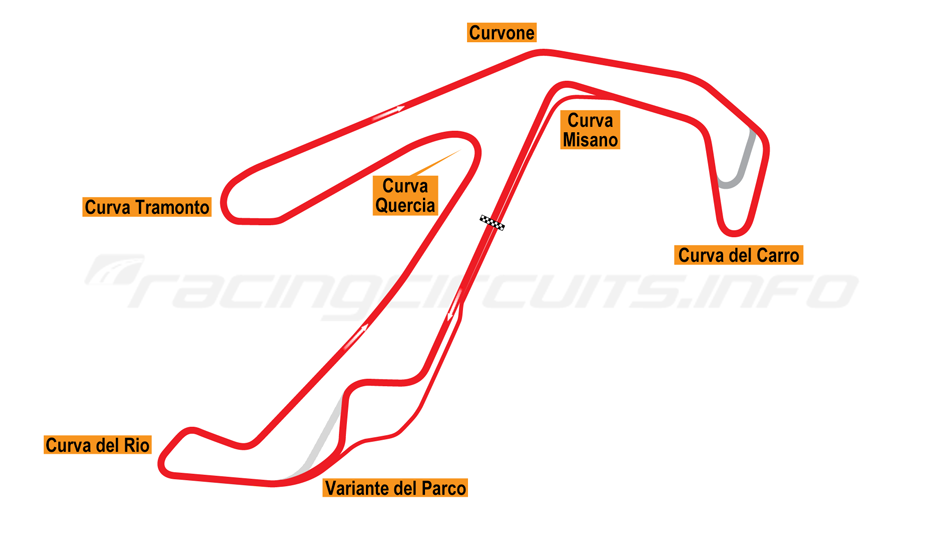 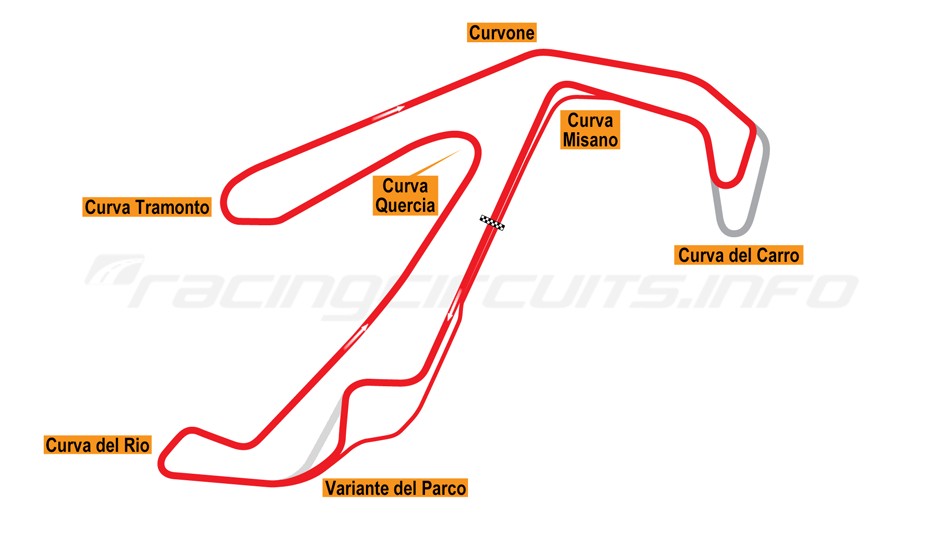 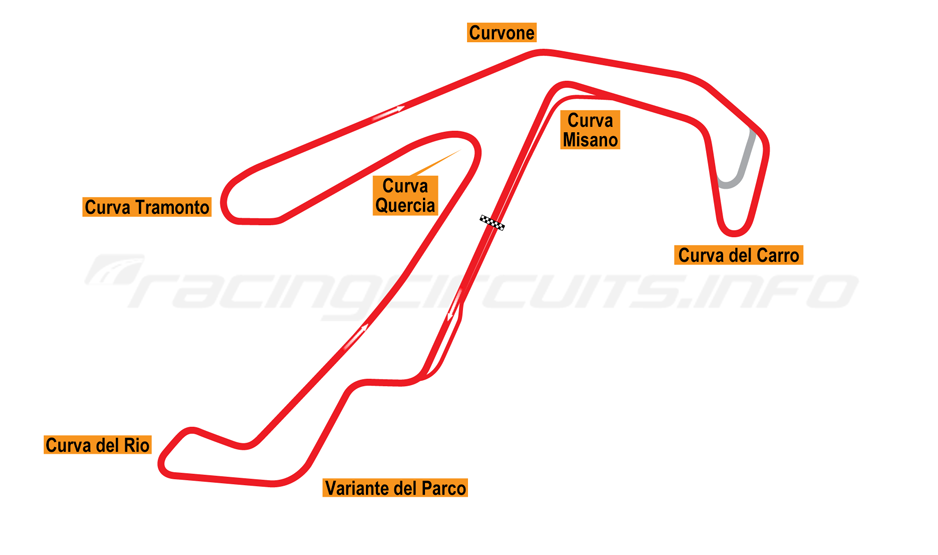 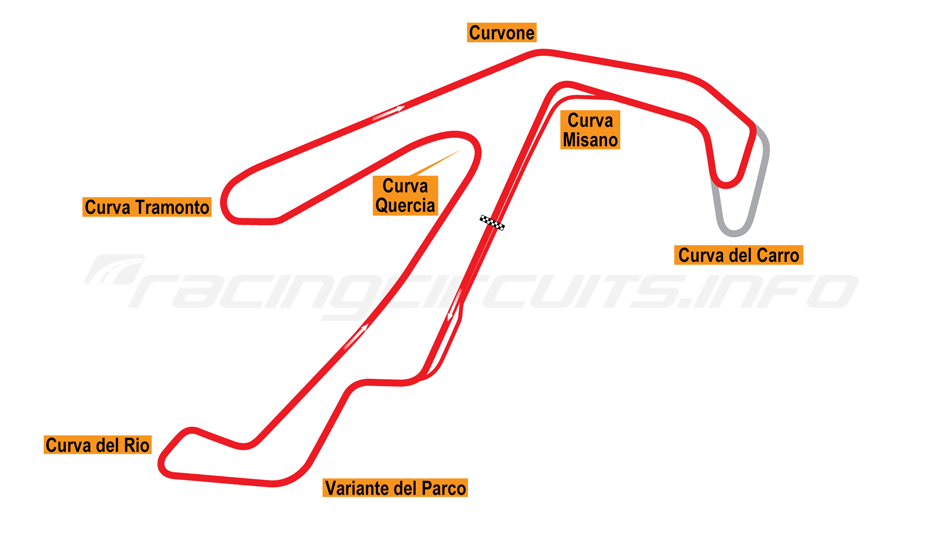 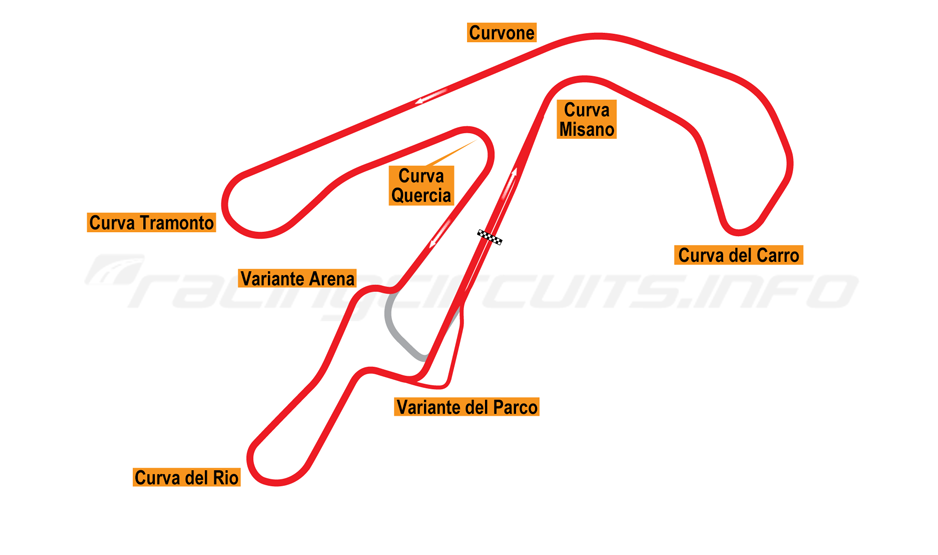 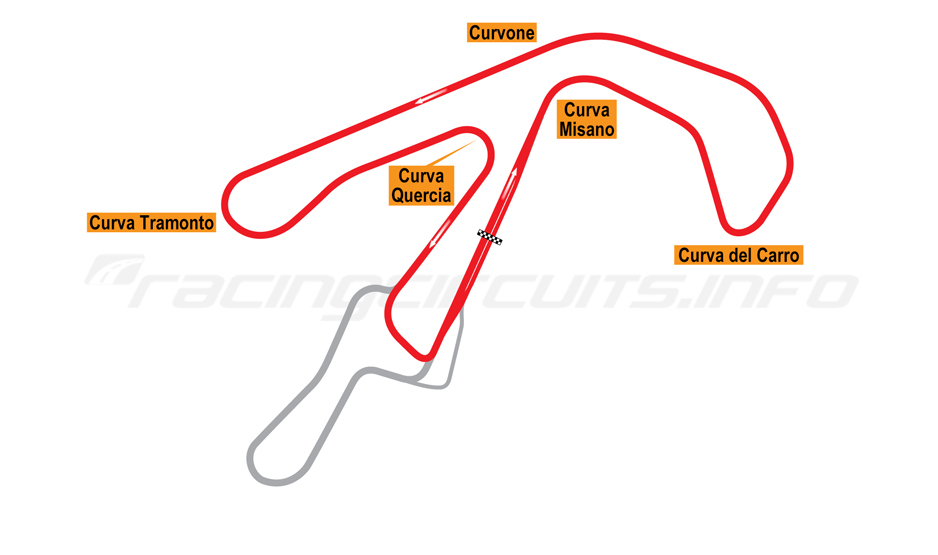 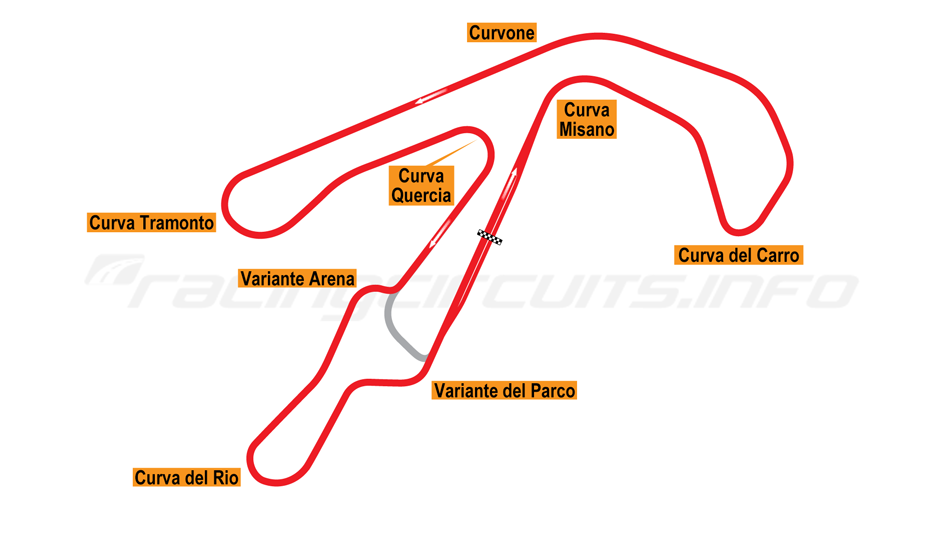 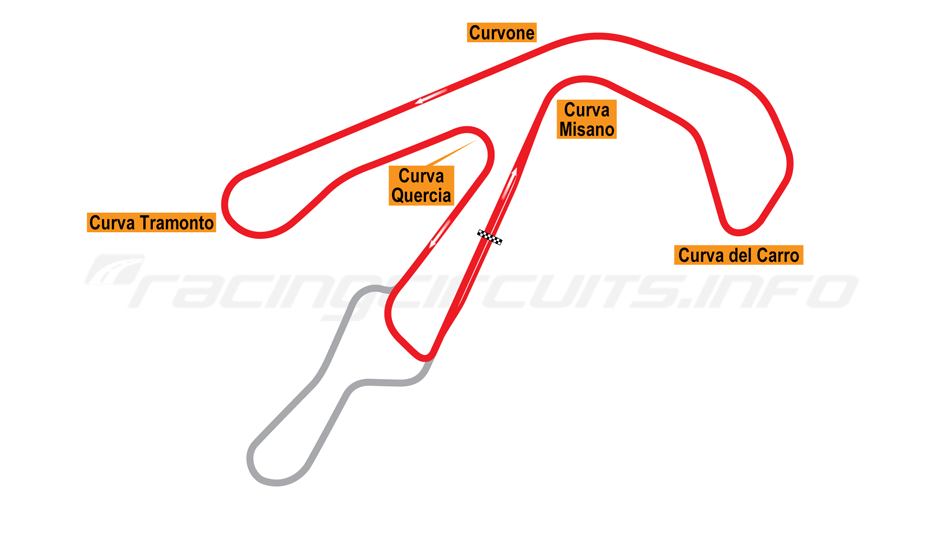 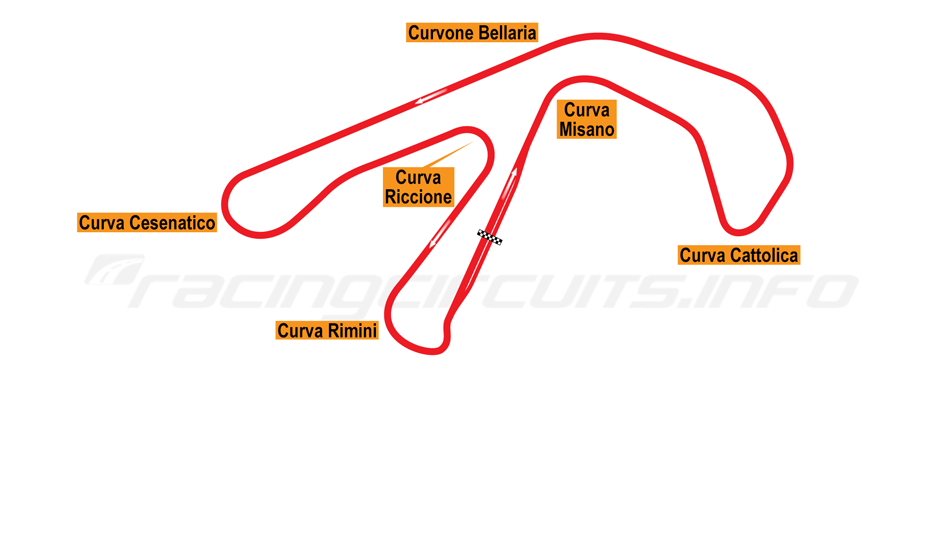 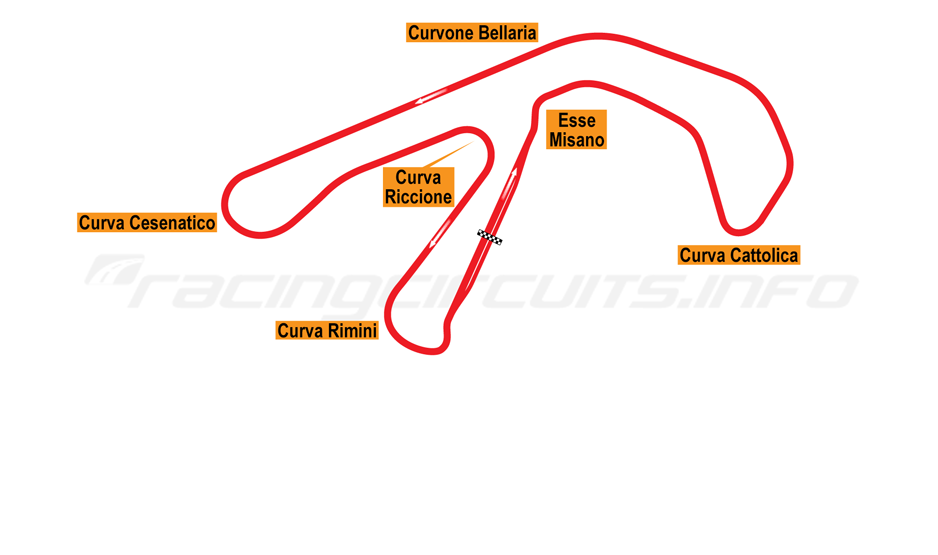 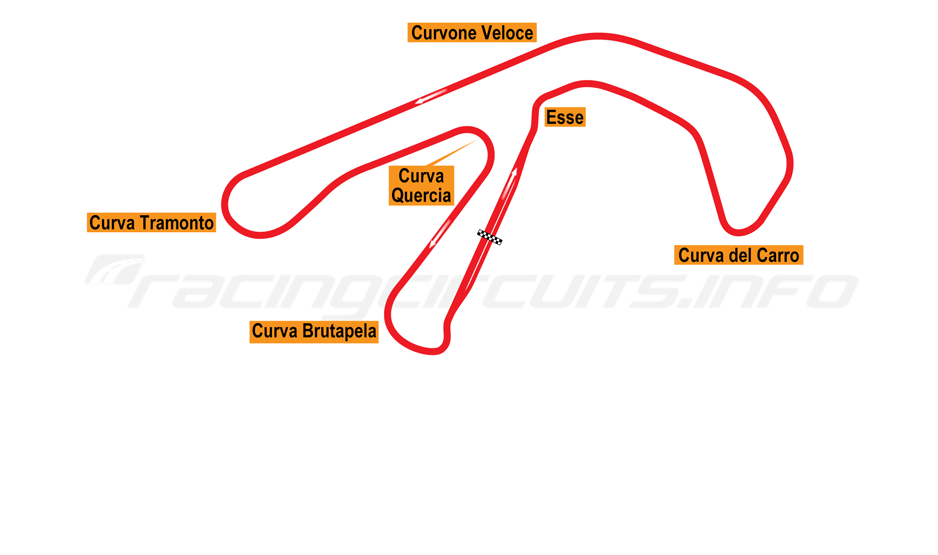 Located a short distance from the beachfront in the seaside resort towns of Rimini, Riccioni and Cattolica, Misano has been one of the principal Italian circuits since opening in the 1970s.

Flat and fairly featureless, the track nevertheless comes alive each year for the visit of the MotoGP World Championships, when the crowds fill the grandstands in huge numbers, in recent years drawn by home hero Valentino Rossi, for whom Misano is the home circuit.

While bike racing has been king for a number of years, the track still attracts top caliber competition on four wheels, particularly since its most recent modernisations. The DTM and GT World Challenge Europe have both been visitors, with the European Truck Racing Championship has been another popular visitor.

The track is officially known as Misano World Circuit Marco Simoncelli, in honour of the late rider who was born in Cattolica, while before 2006 it was called the Circuito Internazionale Santa Monica.

Racing was first proposed at Misano, near the Adriatic coast, in 1969 when plans for a new autodrome under private ownership were put forward for the first time. While the initial proposals drew some praise, question marks as to their suitability for car racing were quickly raised and a larger parcel of land was acquired. A revised design for the Autodromo di Santamonica was approved in 1970 and construction began in November of that year.

The new circuit was finished by the following year, though it was not inaugurated for racing until August 1972. A largely flat design which switched back upon itself several times, it was one of the new breed of circuits emerging in the 1970s; safe by the standards of the day, but perhaps not the most inspiring to drive. Facilities were simple; the pits were small and open, alongside which sat a building used exclusively to house racetrack offices. One unusual element of the new circuit was the floodlighting, which allowed for the staging of night racing.

It was motorcycle racing that really brought Misano to world prominence, however. From 1985-1987 it hosted the World Championships, running three races under the banner of the nearby principality of San Marino.

After a year's break, the championships returned in 1989 for the Nations Grand Prix and one of the championship's most controversial races. Even before the start of the race, riders had expressed concerns about the slippery nature of the track surface, so when rain began to fall, the leaders signalled for the race to be stopped. The leading riders, including Schwantz, Rainey and Sarron, called for a practice session to assess the track conditions before any restart, but the organisers refused. All but 10 elected to sit out the race in protest, leaving Pierfrancesco Chili to run out the winner, cheered on by sarcastic applause from the pits of the boycotting riders. It proved to be Chili's only 500cc win.

Despite the debacle, the World Championships continued to visit for two more years under the San Marino banner, then as the Italian GP in 1991. However, the circuit was technically too short (by around 30 metres) to host a World Championship event and the FIM eventually demanded modifications.

In 1990, the first section of the track was modified by removing the Esses and replacing them with a constant radius turn, simply called Curva Misano. Then, construction began on a new loop at the end of the lap. This was completed in time for the 1993 season and brought the track up to the required length for the FIM. The previous configuration was also still available for use, meaning that for the first time, long and short variants could be raced. New garages, technical areas reception rooms and a large media centre were also opened at this time.

Following the changes, Misano was restored to the World Championship in 1993, though the top class bikes did not return in the following years. World Superbikes, which had first visited Misano in 1991, made it a permanent fixture on its calendar from 1993 onwards.

Further improvements to the paddock and pit buildings were carried out in 1996 and 1997, while revised and tightened Variente del Parco debuted in 2000, with the aim of slowing the final corner and keeping the riders further away from the pit lane wall. Other innovations in this period included the first 5,000 seat spectator stand, which opened in 2001.

Circuit bosses began planning further changes to win back the MotoGP circus in 2005. A radical renovation and modernisation project began with the construction of a new main entrance, followed in 2006 by a new 300 square metre medical centre. At the end of the 2006 season the circuit closed for a total overhaul, aimed at creating the most modern of facilities.

Remarkably, after just five months, the revised and renamed Misano World Circuit emerged. The layout remained familiar, though in reality very little of the original circuit layout remained. Perhaps the most significant change was the decision to run the new course in a clockwise direction, reversing the previous circuit direction. Greater run off areas, modern safety barriers and massively enhanced spectator facilities, with seating for 23,000 people were among the changes. Four new entrances to the circuit also dramatically improved spectator access.

In 1983, in a move to promote tourism in the region, all of the circuit's corners were re-named after local towns, though the circuit itself was unchanged. Inevitably, the original corner names remained popular and in common usage, so over time the circuit reverted back to using many of them. Curva del Carro translates as 'wagon curve', while Tramonto means 'sunset' and Quercia 'The Oak'. Curva Brutapela was named after a farmer who farmed the nearby fields.

For the 2008 season, a further revision was made, with a tightened turn two leading to a more flowing Variente del Parco turn. At the same time, the pit lane exit was extended so that it now blended back onto the track at Turn Three instead of the end of the main straight.

New covered grandstands were installed at various points in 2008 and 2009, boosting capacity to 75,000 spectators, 26,000 of which are in seated in grandstands. The artificial lighting system also underwent radical modernisation: 17 generator-equipped light towers were erected. The circuit thus consolidated another of its unique features: the possibility to run competitions at night.

Other innovations include the partnership with Cisco to provide Wi-fi across the whole site, the conversion of the medical centre into a health centre, open to all, and the installation of solar panelling on the grandstand roofs.

In November 2011, the circuit announced it was to be renamed World Circuit Misano Marco Simoncelli, in honour of the locally-born MotoGP star who had been killed a week before during the Malaysian GP.

Modifications to the run off at the final corner for the 2015 season, in concert with a complete circuit resurfacing. Both projects were supervised by Dromo at the behest of the FIM, which had requested revisions to upgrade safety around the course.  These included revisions to kerbing around the lap, which were largely welcomed by competitors, particularly those on two wheels.

By 2019, complaints over the grip of the track surface led to plans to further resurface the circuit, this time under the supervision of Maurizio Crispino, engineer and Ordinary of Roads, Railways and Airports at the Polytechnic of Milan and director of the MCI Infrastructures Engineering team, which carried out the work in March 2020.  The results have led to improved grip but new - and more vociferous - complaints about a bumpy track surface from MotoGP riders in particular, with Fabio Quartararo likening it to a motocross course and Pol Espagaro calling the bumps "crazy big". Valentino Rossi was more measured, however, commenting: "Misano is always a bit tricky. They did a very good job with the new asphalt, because it has very good grip and there are less bumps, but there are some bad ones in some places. There were more bumps with the previous asphalt, but they were smaller."

Whatever the reality, it does mean that there is another conundrum for drivers, riders and their engineers to get their heads around in order to extract maximum speed from their setups.

Planning a visit to Misano? Find the best deals near to the circuit on hotels, apartments and rooms to rent from the map below.

Misano Adriatico is located alongside the coast in central of Italy, just inland from the tourist beaches of Rimini, Riccione and Cattolica.  The nearest major cities are Bologna (86 miles) and Florence (117 miles), while the Republic of San Marino is 16 miles away.  International flights are available from Bologna and Rimi airports, with connections to Milan.

The circuit is easily reached by road from the A14 Bologna-Bari-Taranto highway.  Take the exit at Cattolica, follow the road towards Misano Adriatico and follow the signs to the circuit. 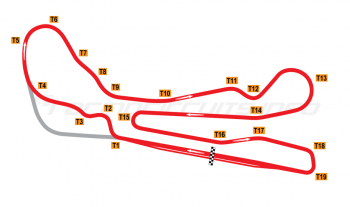 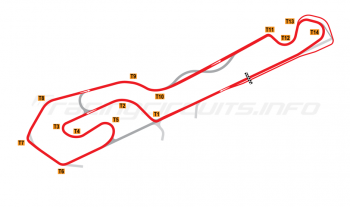 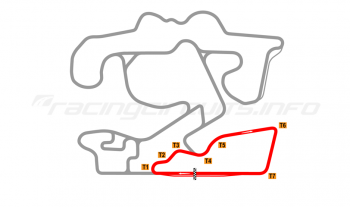