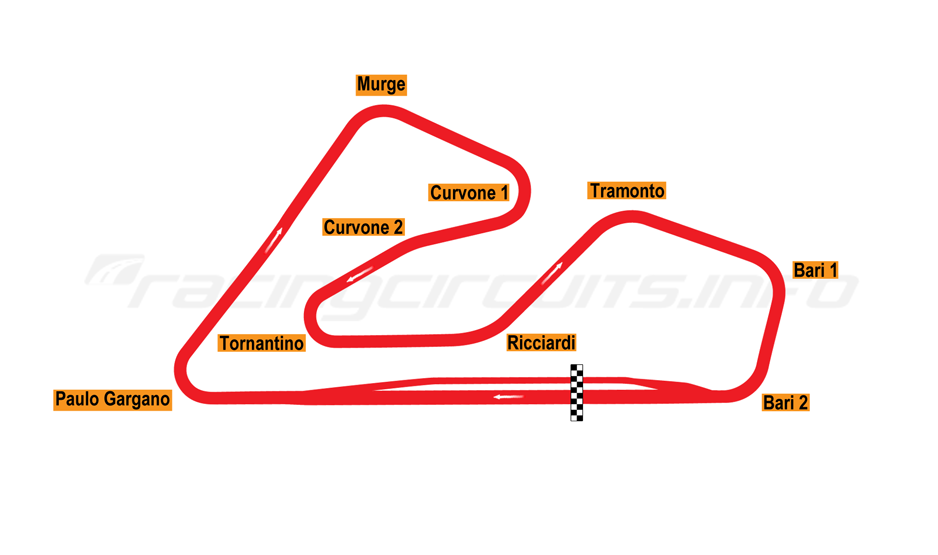 Possibly the only circuit in the world to have adopted pink and purple as the colour scheme for its kerbing and circuit infrastructure, the Autodromo del Levante near Bari is one of the smaller circuits in Italy.

Better known to many as Binetto (the name of a nearby village, though the town of Grumo Appula is actually closer), the track once hosted all manner of national racing but now has only a calendar of club racing.

The track has witnessed the early careers of a host of future Italian motorcycle stars at its Trofeo Inverno (Winter Trophy) races. The first edition in 1989 was won by Max Biaggi, while other riders taking the trophy include Michele Pirro, Loris Capirossi and Valentino Rossi.

There had long been efforts to establish racing in this south-eastern part of Italy, to bridge the considerable gap in provision between the Vallelunga and Enna circuits, which otherwise where the closest venues for local racers. In the 1940s and '50s there had been street races in Bari, Achille Varzi winning the first event in 1956, with further events (run to either sportscar or Formula One/Formula Two rules) won by an impressive roster of drivers; Juan Manuel Fangio, José Froilán González, Nino Farina and Alberto Ascari all triumphed before Stirling Moss took victory in the final event in 1956.

Thereafter came a number of further attempts to hold races in the area. In 1959 the city announced a new project – to be named the Autodromo dei Trulli – at Castellana. It had the backing of the CSAI (Italian Motor Sport Commission) but the project was beset by problems and quickly faded away. Next up was the Autodromo di Putignano. This actually got as far as the construction stage, with then Prime Minister Aldo Moro laying the foundation stone in April 1967. The 2.5km course was essentially a squared off oval-shaped road course (think Rockingham), with an overpass to allow it to loop inside itself, rather like a paperclip. Funded with public monies, construction had advanced by 1970, with around 70 percent of the track and 30 percent of the buildings complete, when a financial crisis hit the local government and the project was abandoned. The remains of unfinished circuit can still be found decaying away on the outskirts of the town.

After this peculiar Italian farce, it was perhaps understandable that public officials shied away from involvement in circuit projects for several years, though the flame still burned bright in the hearts of local enthusiasts. One such individual was Nicola Favia, who was the owner of a motocross circuit at Grumo Appula, around 20kms from Bari, which had also hosted Citroen 2CV races in its time. Could this small facility, winding through the olive groves, be turned into a permanent circuit, he pondered?

After some further consideration, Favio decided to plough ahead and in July 1979 his project was given the green light by the CSAI and the Italian motorcycling federation, though this was only to be the start of a long period of bureaucratic approval. Favia found the regional administrations were more enamoured by another circuit project, near to the airport at Lecce, which ultimately never amounted to anything more than a paper plan. He battled on through the antipathy but it presumably must have had some effect as after several years of stalled progress, he decided to bail on the project, passing it over instead to some-time racer and engineer Michele Di Gioia.

Di Gioia revised the circuit plans to extend their length slightly, allowing for greater numbers of competitors. By 1985, the circuit outline was clear to see, awaiting only its asphalt covering. With the Lecce project dead in the water, Di Gioia figured the time might be right to seek public funding assistance to complete the project and duly approached the Region of Puglia administration. He actually found them quite receptive and they were willing to become involved – but only if they took over complete management control. Having got the project this far, it was to prove a deal breaker and Di Gioia decided to plough on alone.

It took several years, but finally in June 1989 the Autodromo del Levante was inaugurated in front of a large crowd. The 1.577 km circuit was tight and technical, but boasted a large control tower and pit buildings, with a small concrete grandstand opposite. The national racing scene took to it immediately, with Binetto being included on the top Supertourismo and F3 championship calendars within a few years. So it was that the little track could boast the presence on its grids of future stars such as Jacques Villeneuve, Emanuele Pirro and Giancarlo Fisichella.

In more recent years, harder times have befallen the track, with the major championships moving away when the Italian federation sanctioned a minimum lap length of 2 km for national races, leaving Binetto to host only a calendar of club and regional racing. Plans for a circuit extension to bring back the top events have been floated several times but have never come to fruition, so it seems likely that for the foreseeable future Binetto will remain one of Italy's more obscure venues.

For 2022 the track is debuting the Trofeo del Sud in collaboration with the Circuito Internazionale Napoli. This aims to drum up interest from competitors in a range of machinery in a dedicated four-race series, half of which are hosted at Binetto.

Thanks to Luca Pacchiarini for additional information about this circuit.

Planning a visit to Binetto? Find the best deals near to the circuit on hotels, apartments and rooms to rent from the map below.

The Autodrome del Levante is located close to the town of Grumo Appula in southern Italy. Bali Airport is the closest, some 21 kms away.

The circuit is best reached by road and is located off Strada Provinciale 17, which links Grumo Appula and Sannicandro di Bari. There is ample parking on site. 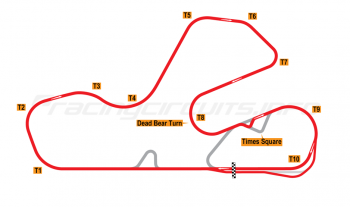 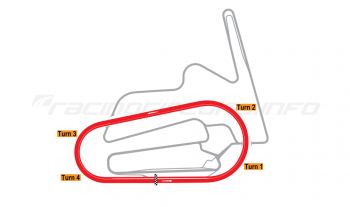