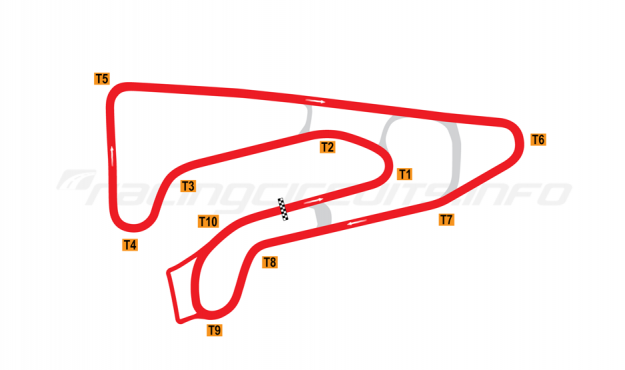 The Athens Circuit (formerly the Aftokinitodromio Megaron or Αυτοκινητοδρομίο Μεγαρών in Greek) was the first permanent circuit to be built in Greece, opening a few months ahead of the country's only other circuit at Serres.

Located on the outskirts of the town of Megara, the track is just 35k from the capital Athens, hence its change of name in more recent times. The brainchild of Christos Anastasiades, construction of the circuit began on the 200-acre site in 1994 and took four years to complete.

The course has a length of 2.1 km, with six right and four left turns and an average width of 11-12 metres. With the longest straight measuring just 580 metres this is not a facility on which you can get too much of a head of steam, resembling something of an oversized kart track. Indeed, while there is a full kart facility located alongside the main track, karts have also been know to use shortened variations of the road course as well.

During its lifetime the track has hosted domestic car and motorcycle racing, as well as events for names such as McLaren and Prodrive, a Ferrari festival and even a Supermotard world championship event.

The collapse of the Greek economy has had an inevitable effect on circuit operations, with few events currently scheduled. It remains to be seen what the future holds; it is to be hoped that if the economy improves, so too do the circuit's fortunes.

Athens Circuit is located to the south of the town of Megara, Greece. The nearest airport is Athens International Airport, around 45 minutes drive away.

The track is located close to the E94 motorway (Highway 6) which links Athens to Megara.
From Megara, head south on Minoas towards Pachi. A short distance after the motorway overpass, you will see the road to the circuit on the left hand side, also signposted for the railway station, which is handily located alongside the circuit itself and has direct services to and from the airport.

Find the best hotel and room deals near to Athens Circuit: