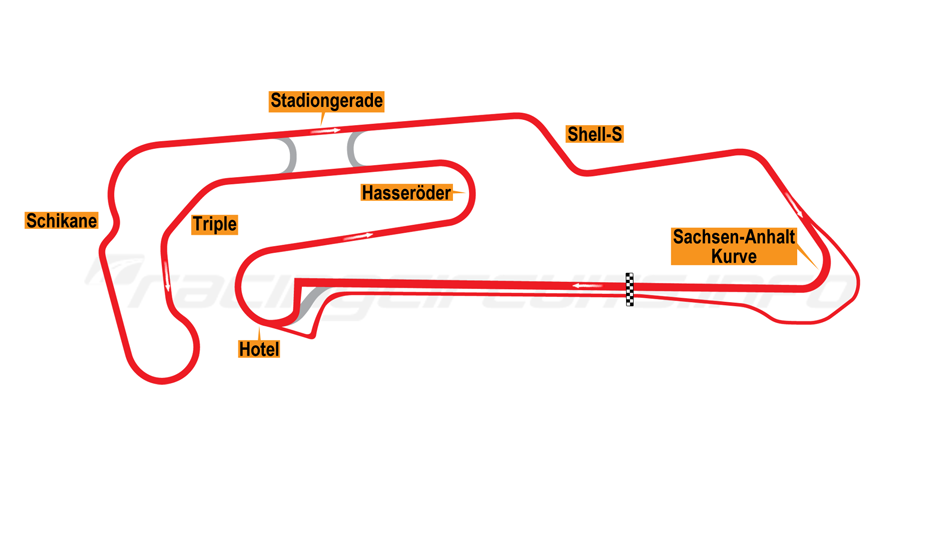 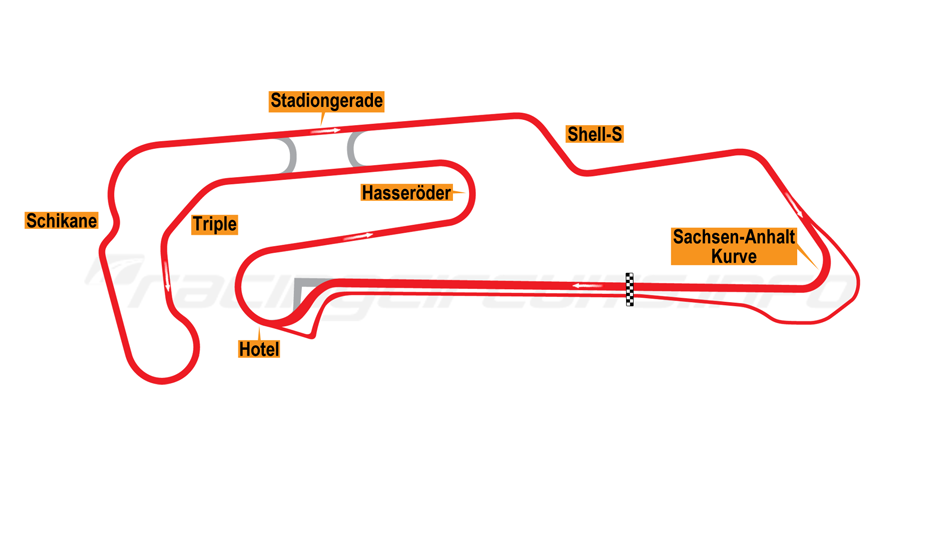 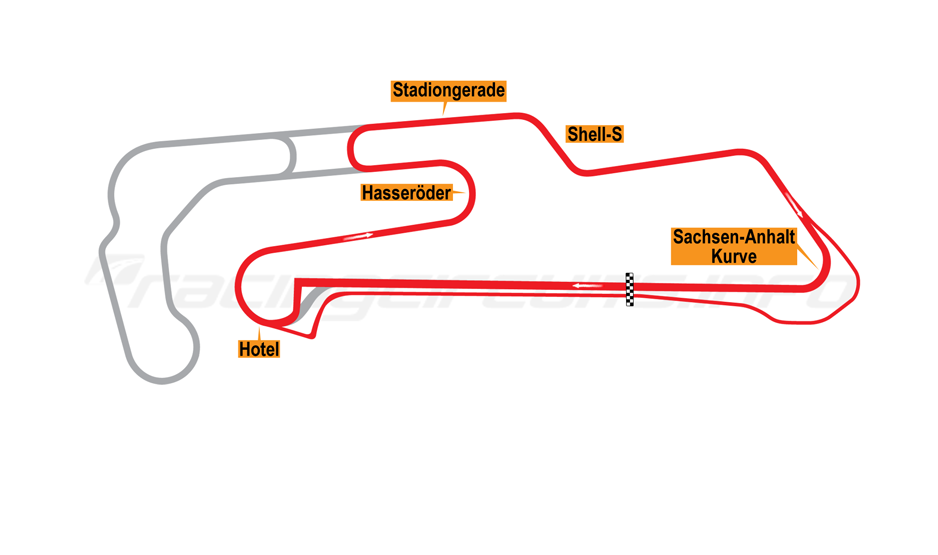 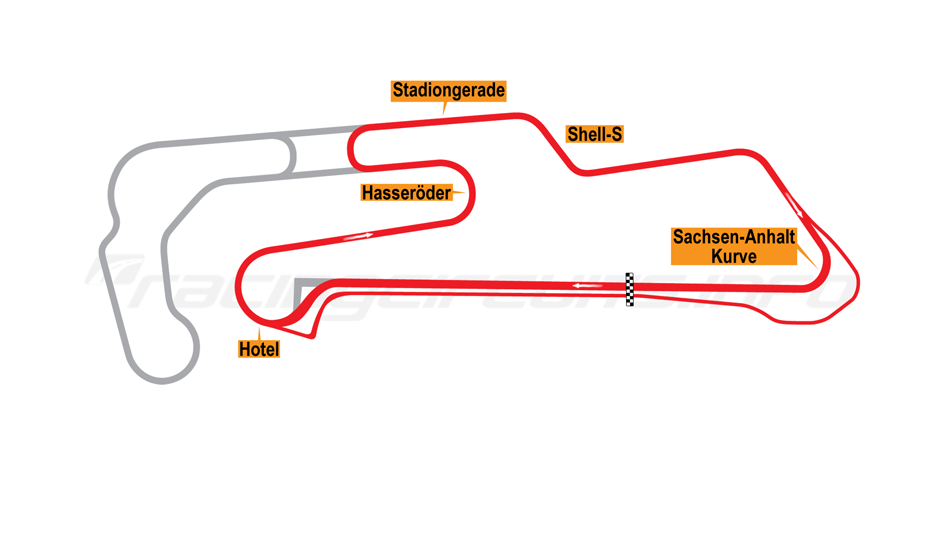 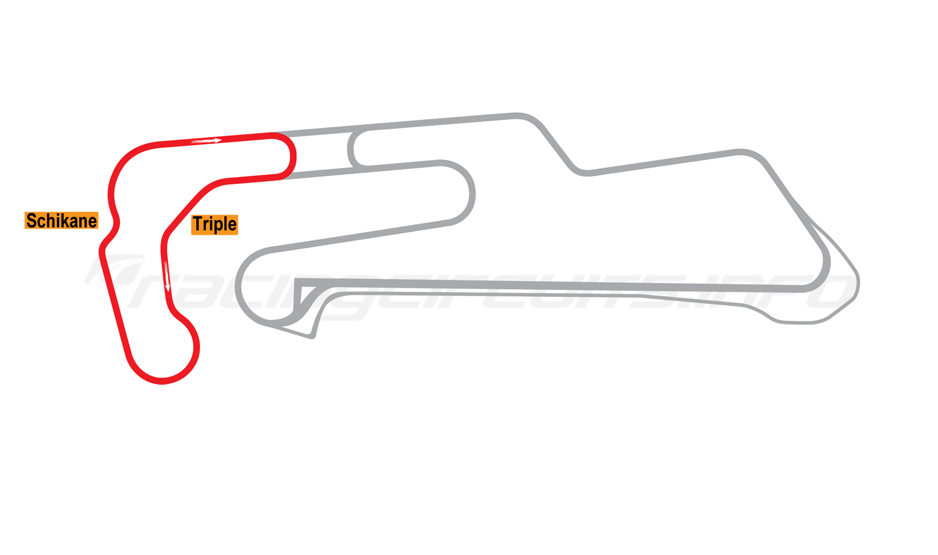 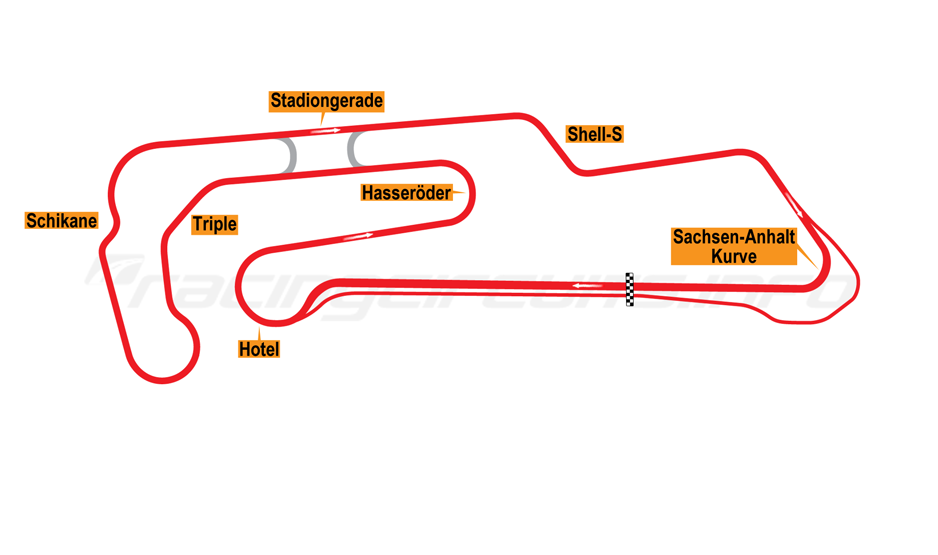 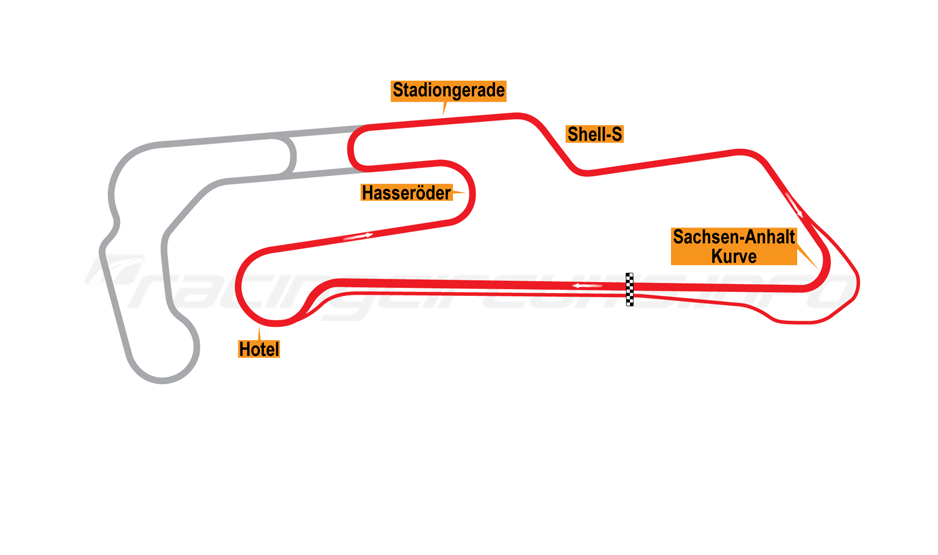 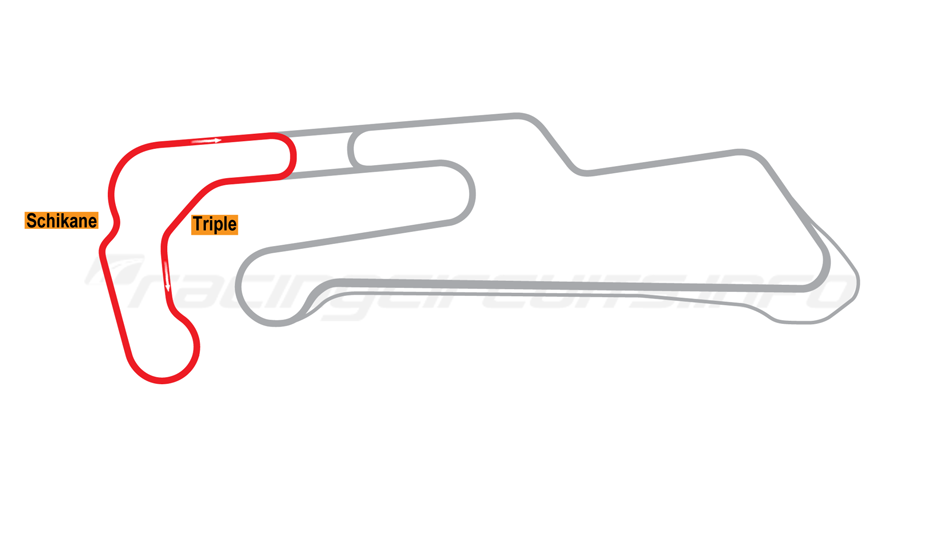 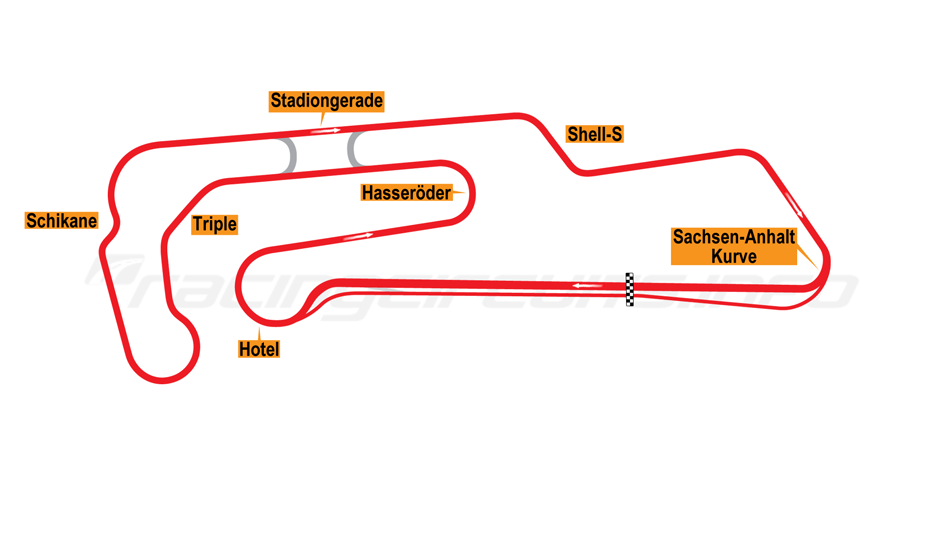 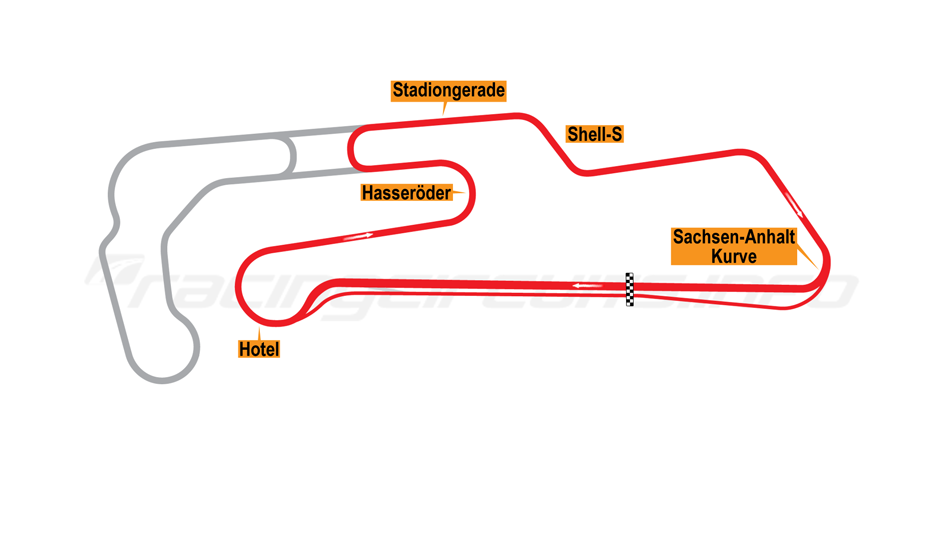 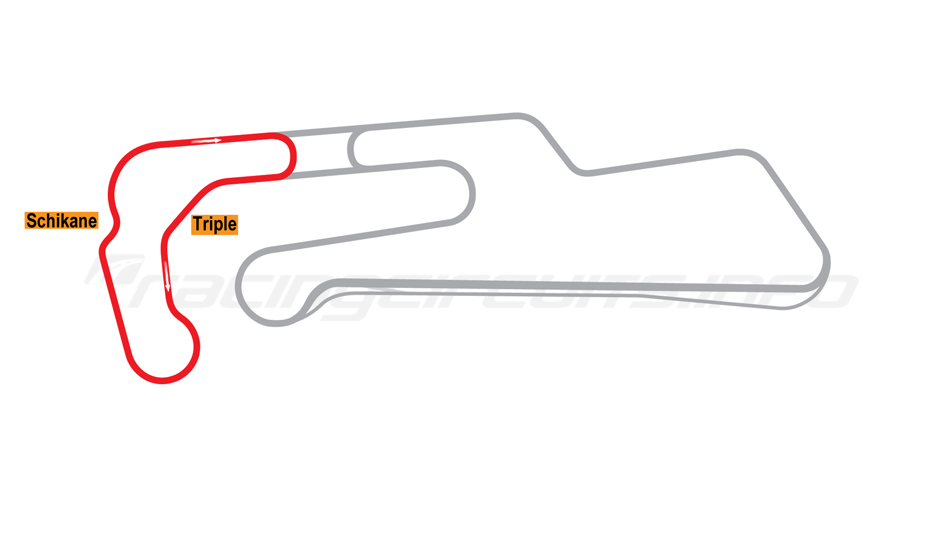 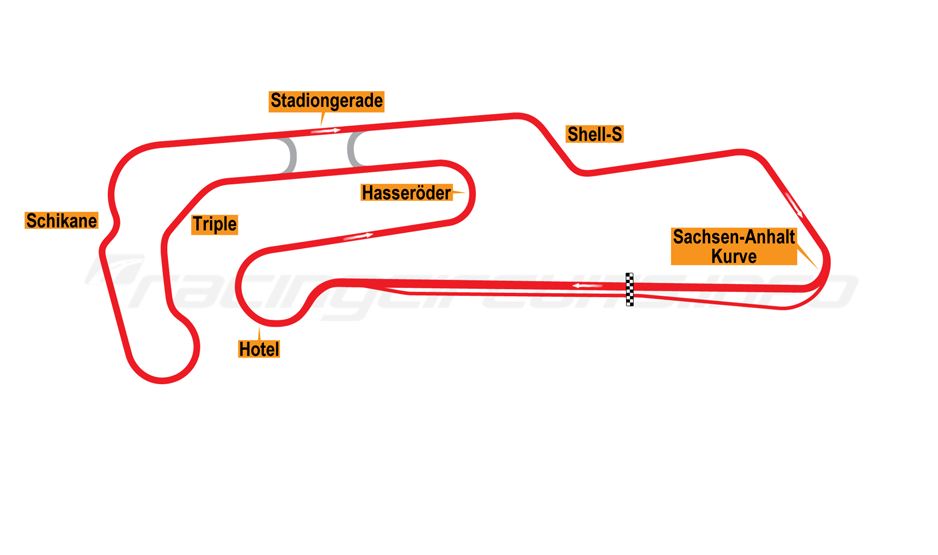 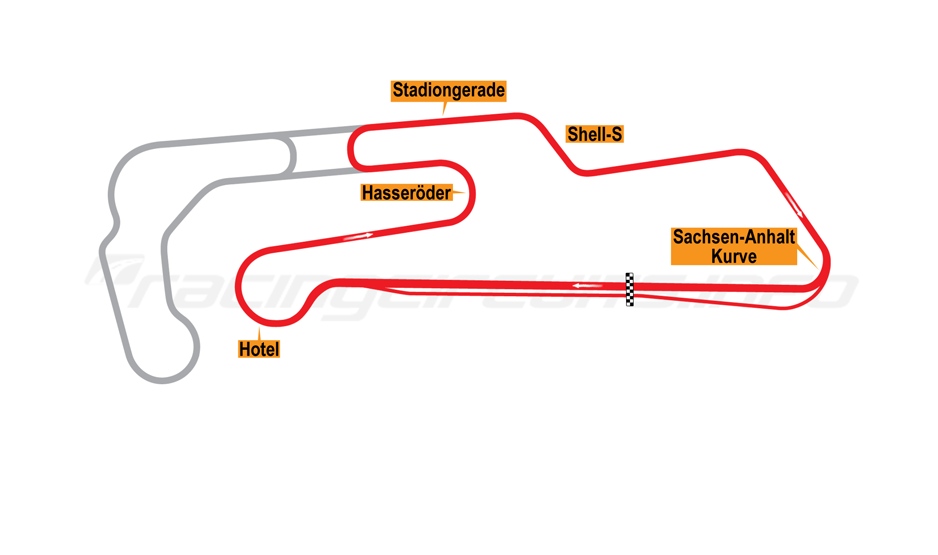 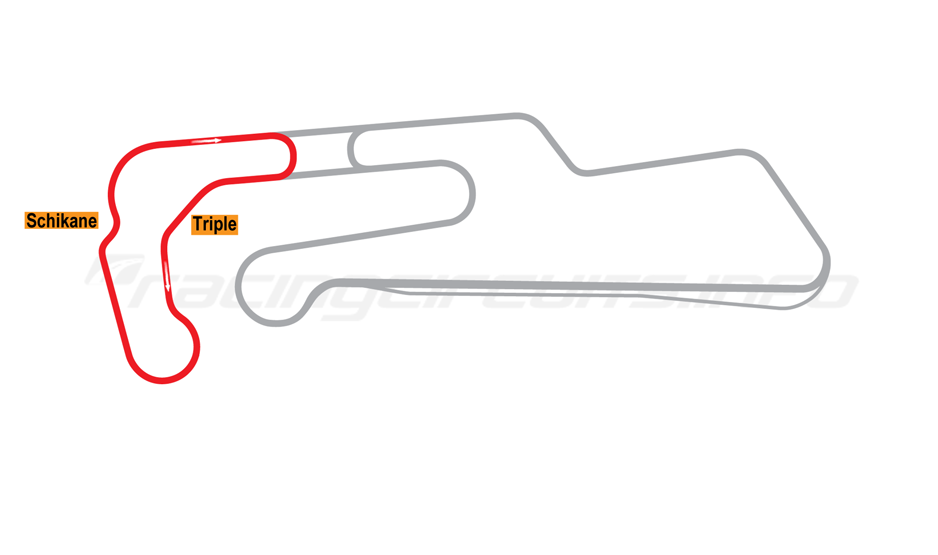 Germany's third permanent race circuit after the Nürburgring and Hockenheimring, Oschersleben became the first such facility in the former East Germany when it opened in 1997. It has become a staple part of the German motorsport scene and has also enjoyed an occasional international focus.

Marketed as the 'Motorsport Arena' the name is apt, as all spectator areas sit between six and eight meters above the track, allowing a close view of the track and good viewing across most of the circuit.

Today, Oschersleben hosts only domestic level racing, with the ADAC GT Masters and the IDM Superbikes as the main headline events. Outside of racing, the circuit remains busy with testing, driver training and other non-motorsport events for 280 days a year.

The circuit had been some years in the planning when a ceremony to mark the turning of the first sod was held on April 5, 1995. By July, construction proper had begun and over the next year what had been a maize field in a quiet agricultural area was transformed into a state-of-the-art motorsports venue.

The whole project would cost €58 million and saw contractors Bunte Bau move 1.25 million cubic metres of soil during the large scale civil engineering works. Gradually, the 2.279 miles circuit began to take shape, alongside a separate kart track and an offroad course. The design for the main track featured 14 bends and could be split into two smaller courses, able to be run simultaneously. Along its course sat nine gantries with overhead warning lights, designed to supplement on course marshal flagging.

The main pit buildings sat in front of a generous paddock area and featured 29 garages, above which lay numerous office rooms, VIP lounges and a bistro. The adjoining race control tower boasted sophisticated digital remote controlled video monitoring system to ensure safe running of events and also contained the commentator boxes and a modern press centre with around 100 work places for journalists and photographers. Adjacent to the pit facilities sat an 88 room 4 star hotel, the circuit developers mindful that accommodation would be at a premium in the this rural part of Germany.

Construction was completed by the summer of 1997, ready for Motopark Oschersleben's inaugural race meeting in July, a round of the Ferrari Challenge, followed a week later by a GTP event. The racing calendar was rounded off by the BERU Top 10 series and would build considerably over the following years.

During the off season, a small modification was made to the pit lane exit, extending it so that cars now filtered onto the track in the middle of turn one, instead of prior to it. It would be revised again in 2000, when a new extended pit entry was added, skirting the run off area at the final corner.

In 1998, the FIA F3000 and FIA GT Series represented the first headline international events to be held at the circuit, the season openers for both categories. It was a soggy start for the single seaters, as damp conditions gave way to torrential rain and Stéphane Sarrazin emerged as a slightly unexpected winner. The race was at least dry for the FIA GT racers, home hero Klaus Ludwig winning alongside Brazilian Ricardo Zonta in the thundering Mercedes-Benz CLK-GTR.

Subsequent years would see the circuit establish its roster of races. FIA GT and F3000 would become mainstays until the reorganisation of both series into the GT1 championship and F3000 as a F1 support category. In their place came the WTCC and DTM touring cars, while the World Superbike Championship made the circuit an annual stop-off between 2001 and 2004.

By 2002 the finances of the operating company were becoming stretched, as the reality of running a track became apparent. Debts owed to creditors soon mounted and on 10 January 2002 the Motopark applied for bankruptcy at the regional court in Magdeburg. The circuit continued to operated as normal under the bankruptcy proceedings which carried on for several years. By summer 2005, the Motopark was finally declared insolvent and new owners were sought. Into the breach stepped a consortium which included Bunte Bau, the contractors who had built the facility, who took ownership in June 2005.

Renaming the circuit as the Motorsport Arena Oschersleben, the first significant updates to the circuit came under the new ownership in 2007. In a bid to spice up the racing and aid overtaking a new re-profiled first turn was debuted. A sharp 90 degree bend was added followed by a bend to the right were in blended back into the old track. At the same time, the pit lane exit was modified once more with the insertion of a sharp hairpin prior to its exit.

Elsewhere, a tarmac run-off was added on the outside of the demanding Triple Curves, which at least reduced the chances of safety cars when errant cars went off. Previously they would have found themselves stuck in a deep gravel trap but now could simply drive on and rejoin safely at the Hotel corner.

The changes would prove controversial – it was debatable whether the new Turn One really did aid overtaking, but it certainly increased the chances of first corner pile ups as cars funnelled from high speed into the slow and narrow section of track. Carnage often ensues at race starts and there are few events where all vehicles emerge unscathed. Fortunately, the old layout was retained for motorcycle events but it does seem to be a set feature that's here to stay for four wheeled racing.

Planning a visit to Oschersleben? Find the best deals near to the circuit on hotels, apartments and rooms to rent from the map below.

Motorsport Arena Oschersleben can be found on the eastern outskirts of the town of Oschersleben, around 20 miles southwest of Magdeburg in central Germany.   The nearest international airports are at Leipzig/Halle (77 miles/124 kms to the south) or Hanover (88 miles/140 kms to the west).

The circuit can be reached via the A2 Hanover-Berlin autobahn, exit Eilsleben or Wanzleben and follow the signs for the circuit, which is located around 25 kms from the motorway.  Parking is available at the circuit for a small charge.

You can also arrive by train.  The nearest station is at Oschersleben, with connections to Magdeburge and the Berlin-Hannover ICE express train.  The circuit is a short taxi ride from the circuit. 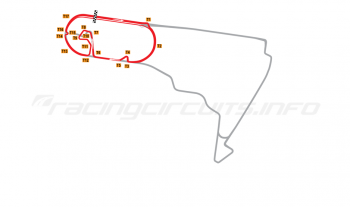 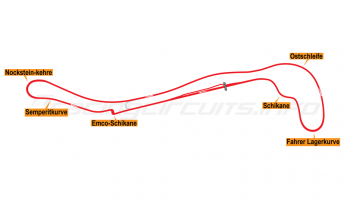 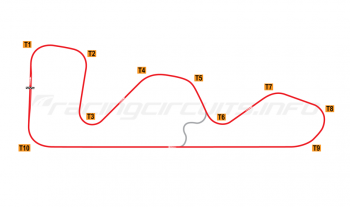