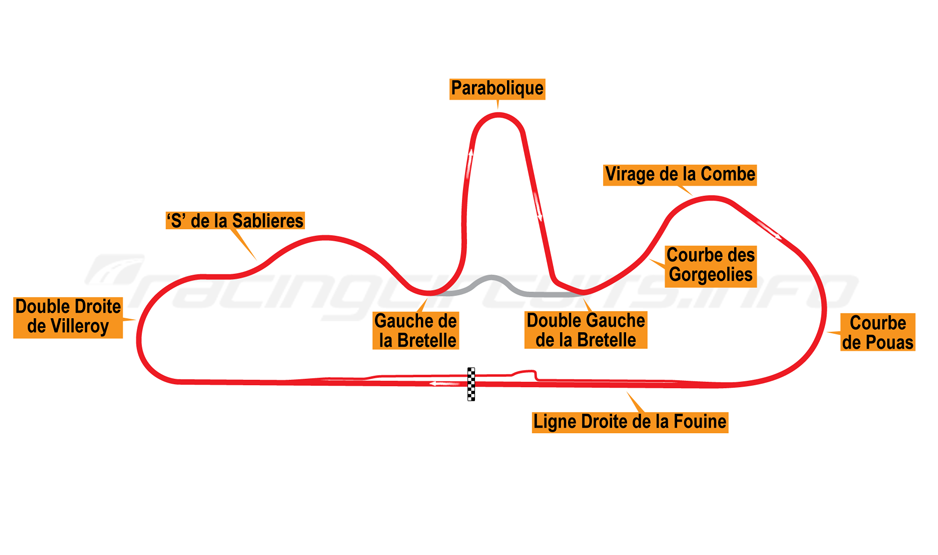 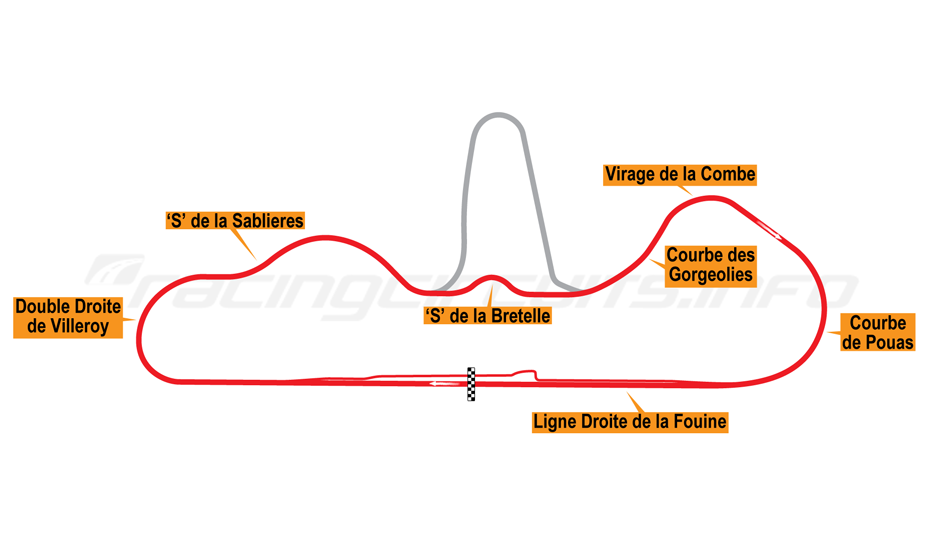 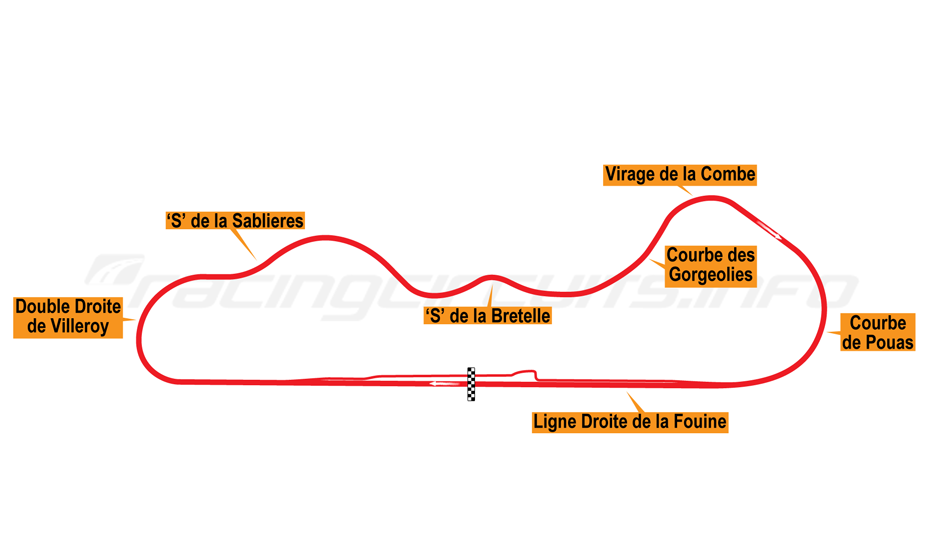 The Dijon-Prenois circuit is a short roller coaster ride around the Burgundy countryside, once host to Formula One and World Sportscars but now primarily a domestic venue. While its most prominent days may be behind it, it will always have the distinction of hosting one of the most thrilling F1 duels, when Gilles Villeneve and Rene Arnoux engaged in a memorable battle in the closing stages of the 1979 race.

Relatively short but with considerable elevation change and noted for its sweeping corners, the layout tends to promote close and frenetic racing.

While more recent decades have seen the visit of the FIA GT Championship and the DTM for one-off events, today the circuit is best known as a hub for historic racing, including the Grand Prix de l'Age d'Or.

The circuit was the brainchild of former rugby-player and wrestler François Chambelland, who was keen to create a venue to make Dijon an automotive centre. Choosing land at Prenois, a wooded area to the west of the city, he began formulating his plans in 1967. Despite struggles with getting necessary funding, construction began in 1969 and was complete by 1972.

Chambelland had taken advice from racers Jean-Pierre Beltoise and François Cevert, as well as motoring journalist José Rosinski, which resulted in a challenging layout. Anyone standing on the start-finish straight could be forgiven for thinking this is another flat-aerodrome circuit but as soon as you arrive at the first turn, you plunge downhill through a sweeping series of curves, before climbing back up the hill on the return leg. With unusual elevation changes and off-camber corners, this is a circuit which tests concentration to the full.

The initial plans called for a longer course but with finances tight, it was decided to build a shorter variant with the hope of finishing the full circuit later. The ghostly outline of the original planned course is still visible on satellite photos, where its line faintly cuts through the wooded area. Had it been built, it would have taken the lap length up to 5km with an extension that is reminiscent of Brands Hatch's Grand Prix Loop.

In spite of the funding shortfall (no support had been given by the city government), the new course opened on 26 May 1972. Fellow former rugby-player Guy Ligier was given the honour of turning the first lap by Chambelland. The first race, for 2-litre prototypes, was held ten days later, with Arturo Merzario running out the inaugural winner in an Abarth Osella SE-021.

World Sportscars arrived the following year for a 1000km race, victory falling to the Matra-Simca of Henri Pescarolo and Gerard Larrousse. The following year it was Formula One's turn, the race having switched from Paul Ricard. Victory fell to Ronnie Peterson's Lotus, but the short nature of the circuit proved far from ideal, with lots of congestion between the leaders and backmarkers who were lapped frequently. Things were slightly better for the non-championship Swiss Grand Prix, though this was partly due to there only being 16 cars entered. If F1 was to return again, a circuit extension would be required.

The circuit is extended

Formula One duly departed to Paul Ricard once more but Chambelland persevered and, in 1976, construction began on a new circuit extension. Finances did not allow for the full course as originally planned, but instead the course diverted left at after the esses to a short straight and a hairpin, which had a considerable elevation, rising steeply to another undulating straight before rejoining the course. Minor modifications were made to the original short course to accommodate these changes.

In its new guise, Formula One was back at Dijon in 1977 in a deal which saw the race alternately hosted with Paul Ricard. The extension had the desired effect, extending lap times by 13 seconds. John Watson led much of the race for Brabham, but his Alfa Romeo engine proved too thirsty and faltered on the final lap, allowing the Lotus of Mario Andretti to sweep by for victory.

Formula One returned in 1979 for what would turn out to be a historic race. Jean-Pierre Jabouille motored on to a dominant win, the first for Renault and a turbo-charged engine but hardly anyone remembers this. Instead, all eyes were on the battle for second, where Jabouille's team mate Rene Arnoux was engaged in a ferocious battle with Ferrari's Gilles Villeneuve. The pair swopped positions multiple times, banging wheels and exchanging paint on several occasions before Villeneuve prevailed.

F1 returned again in 1981 (a first win of many for Alain Prost), 1982 (once again under the title of the Swiss Grand Prix) and 1984 before Paul Ricard once again asserted its dominance. Thereafter the circuit became a venue for Formula 3000 between 1985 and 1989; the World and then European Touring Car Championships in 1987 and '88, before the World Sportscars returned in 1989 and 1990.

The European Truck Grand Prix was its only non-domestic event from 1991 until the return of long distance sportscars in 1998 with a round of the FIA GT Series. A new state-of-the-art kart track was added in 2001 and in 2008 modifications to the run-off at the Parabolique hairpin heralded a new push to regain international motorsport. This was duly rewarded with a round of the DTM in 2009, but despite a good turn out of 24,000 spectators, the event was not repeated as finances proved difficult to raise in subsequent years.

Today Dijon-Prenois has reverted to being a national-level circuit, domestic and Swiss championship events running alongside popular historic races, motorcycle and club competitions.

Planning a visit to Dijon-Prenois? Find the best deals near to the circuit on hotels, apartments and rooms to rent from the map below.

The Dijon-Prenois Circuit is located at Dijon in the Burgendy region of France. The nearest airport with scheduled passenger flughts is Dole-Jura, around 50 minutes drive to the south-west, while Lyon-Saint Exupéry Airport, is just over two hour's drive the south with an expanded range of international flights.

The circuit is located to the north-west of the city of Dijon. Head out along the D-971 until you reach the small Dijon-Darois aerodrome. Turn left onto the D104 and follow the 'Circuit Automobiles' signs to the circuit entrance. Ample parking is available on site.

The nearest railway station is Dijon-Ville, which is an important hub on the SNCF network. High-speed TGV services connect the city to Paris, Nice and Strasbourg. A taxi will be required to reach the circuit from the station. 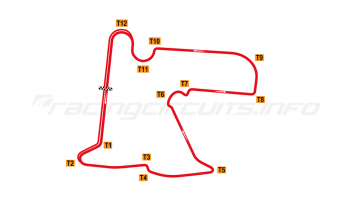 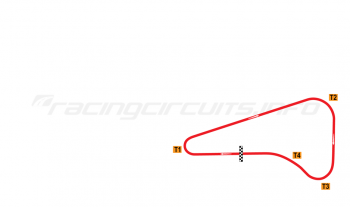 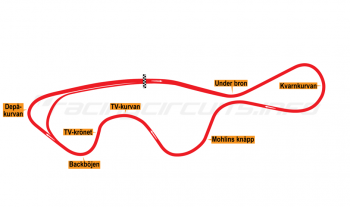