The city of Brno has been a hub of motorcycle and car racing ever since the 1930s, when an 18-mile course was laid out on public roads to the west of capital of the Czech region of Moravia. Swooping through valleys and onwards between the houses and shops of multiple villages, it must have been a white knuckle ride in its early days.

By comparison, today's autodrome is a pale imitation of what went before but is nevertheless well regarded when seen against other modern circuits.  In fact, it is something of a rider and driver favourite, featuring flowing corners and considerable elevation changes along its length.

While the MotoGP had been the headline act at Brno for many years, demands for a full resurfacing to meet FIM Grade A standards have not been able to be met, so the track has slipped from the schedules.

The city of Brno has been a hub of motorcycle and car racing ever since the 1930s, when an 18-mile course was laid out on public roads to the west of capital of the Czech region of Moravia. Swooping through valleys and onwards between the houses and shops of multiple villages, it must have been a white knuckle ride in its early days. By comparison, today's autodrome is a pale imitation of what went before but is nevertheless well regarded when seen against other modern circuits.

The story begins in 1930, when the first Masaryk Grand Prix was held, named in honour of the first President of Czechoslovakia, Tomáš Masaryk. Starting on the south-western outskirts of Brno itself, the course ran anti-clockwise up to the hills and through the villages of Kohoutovice and Žebětín, through a series of hairpin bends to Ostrovačice and then a series of flong straights and fast kinks to the next village, Bosonohy. After dodging the houses and shops through a series of fast bends, the course headed along the main road back to Brno.

The first race was won by the German driver Hermann zu Leiningen in his Bugatti, with Louis Chiron taking the next three victories, including the 1933 event in an Alfa Romeo entered by Enzo Ferrari. From 1934 onwards, victory was fought out by the German Silver Arrows cars of Mercedes-Benz and Auto Union. Hans Stuck and Bernd Rosemeyer won for Auto Union in 1934 and 1935 and, after a year's sabbatical, Rudolf Carracciola took the spoils for Mercedes in 1937.

The German occupation and then the outbreak of World War Two meant there would not be another event until 1949 and when racing resumed, it was on a shortened 11 mile course, bypassing the section to and from Ostrovačice, with racing now held in a clockwise direction. Now part of Communist Czechoslovakia, the race drew a huge crowd of 400,000 from across the Eastern Bloc. Peter Whitehead ran out the winner in a Ferrari 125.

Bike racing to the fore

From 1950, the Grand Prix switched from four wheels to two and the local motorcycle riders fought it out for victory alongside a number of foreign riders, most notably Dickie Dale and Garry Hocking, who were 500cc winners in 1958 and 1960. A further shortening of the course in 1964 saw the lap reduced to 8.6 miles and created an impressive new section of sweeping country roads bounded by ditches, which became something of a signature feature of the course.

In 1965 the event came to world attention when it was included on the World Motorcycle Championships calendar for the first time. This heralded the golden era for the Masaryk Circuit, with some of the all time greats of two-wheeled competition battling for victory. Phil Read, Bill Ivey, Jarno Saarinen, Mike Hailwood and Giacomo Agostini were all multiple winners here.

In 1975, the final version of the street and road course was introduced, with the building of a new highway requiring a revised section of road to end the lap. This course measured 6.7 miles but was no less testing for its reduced length. The World Championships continued to visit until 1982 (though not for the 500cc machinery after 1977) before being dropped in favour of a European Championship round.

The revised course also heralded the reintroduction of car racing alongside the motorbikes. The European Touring Car Championship held a regular round here, with BMWs proving dominant until Tom Walkinshaw's fearsome Jaguar XJS cars ran out winners for three years in a row between 1982 and '84. Then it was the turn of the big turbo Volvos to clatter their way between the Armco barriers to victory in front of enormous crowds.

It was perhaps inevitable that this throwback to a forgotten era of racing would some day come to an end and, with the writing firmly on the wall, event organisers looked to a more permanent solution. In 1985, construction began on a new purpose-built circuit on a site within the bounds of the 1930s circuit, though using none of its roads. Thousands of trees were felled and replanted elsewhere and there was considerable landscaping required, but gradually the new circuit emerged.

The new Brno Circuit opened in 1987 and immediately fulfilled its ambitions by regaining a round of the World Motorcycle Championships - an event that continues to this day as the Grand Prix of the Czech Republic. The circuit has remained largely unchanged, save for a revised pit entry which debuted in 1996. Alongside the MotoGP races, the circuit has also hosted rounds of the World Superbikes and a variety of car events over the years, including the WTCC and FIA GT series.

Sadly, a deteriorating track surface has meant the future of the MotoGP round is in question.  After the 2020 race, the FIM stipulated that the circuit must be resurfaced in order to host the race, however the difficult financial circumstances brought about by the coronavirus has meant that circuit officials and local authorities elected not to carry out the works.  As a result, Brno has been dropped from the series schedule and it is not clear when it might return.

And for those racegoers heading from Brno city out to the circuit, a remnant of the old circuit is still visible. Alongside the main road stand the old pit buildings, bricked up and somewhat forlorn looking with their fading paintwork, acting as a somewhat sad reminder to a now bygone era of road racing.

Planning a visit to Brno? Find the best deals near to the circuit on hotels, apartments and rooms to rent from the map below.

Brno Circuit is located approximately 23 km from the centre of Brno in the southern Moravian region of the Czech Republic.  The nearest airport is  Brno-Tuřany Airport, around 15 miles to the east, offering a small number of international flights to London, Eindhoven, Russia and several Spanish airports. Prague's Václav Havel Airport is the main international airport for the country but is a 2 hour drive to the north west.  Over the border in Austria, Vienna International Airport is actually slightly closer and may be a good alternative.

The circuit can be found close to the main D1 Prague to Brno motorway.  From Prague you can take Exit 178 (signposted Ostrovačice) and from Brno/Vienna  Exit 82 (Kývalka) and follow signs to the circuit.  For those that want to sample part of the old circuit, head out of Brno on route 602, which runs parallel to the motorway. 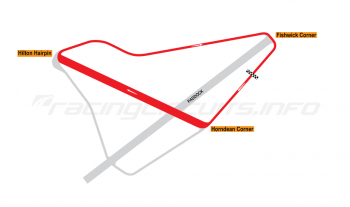 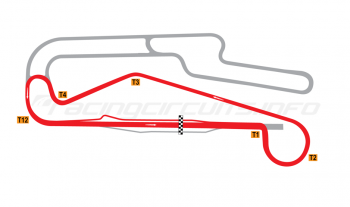 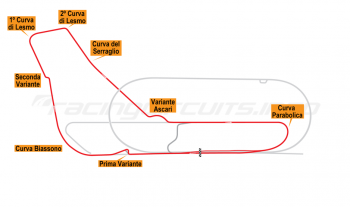