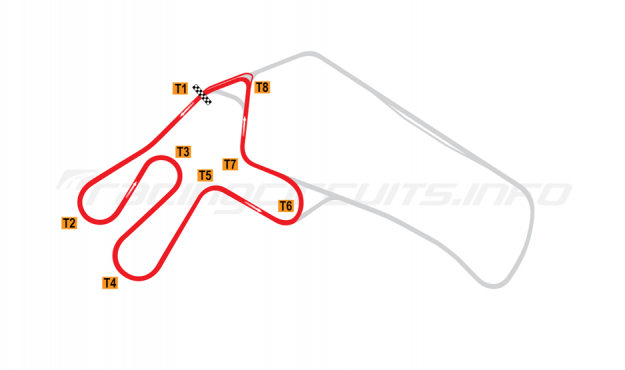 Ukraine's only current permanent racing facility, the Autodrom Chayka (sometimes spelled Autodrom Chaika or автодром чайка in Ukrainian) traces its origins to when the country was part of the Soviet Union. Today it's short variant is the only one in operation for local level races, as time and a lack of resources have meant that the always borderline safety levels of the main course could no longer sustain active competition.

Design work for the facility on the western outskirts Kiev began in the late 1960s, at the instigation of the DOSAAF (Volunteer Society for Cooperation with the Army, Aviation, and Navy), the paramilitary sport organisation in the Soviet Union, concerned mainly with weapons, automobiles and aviation. The Ukranian Soviet Socialist Republic did not have any tracks for circuit racing, nor had it organised any street circuit events, so the republican committee realised there was a need for a new venue to facilitate motorised competition and training.

Approval for the new complex was approved in 1971, with construction beginning two years later. The first stage of the development - the circuit itself - was completed by the summer of 1975, including the main 4.460km 'Big Loop' track, plus two shorter variants, which would only ever be used for testing or for warm up laps on the way to the main grid.

The circuit was fast and quite wide in places, featuring lightly banked corners of between 2-6%. A signature part of the 'Big Loop' and 'Little Loop' were the switchback corners of Turns 3, 4 and 5, which became to be known as the 'ears' of the course.

While designed broadly to international standards, the circuit featured a number of design and construction shortcomings, which effectively precluded its use for motorcycle racing. Armco barriers surrounded the course but were installed right at the edge of the racing surface in most places, meaning there was no run-off whatsoever, while the track surface was poorly laid and bumpy. In addition, there was little landscaping done around the perimeter, leaving large areas of scrubland or rubble, which only served to throw dust onto the already difficult racing surface.

Nevertheless, the first races took place on June 27, 1975. Winners that day included Nikolai Popov in a VAZ-2101 (Class VII), A. Tolstop in a Muscovite-412 (Class VIII) and Nikolai Rogozhin in a GAZ-24 (Class X). On July 12 the same year, the new circuit hosted rounds of the Soviet national championships for the first time. The opening Formula 1 race was won by Henry Saarm from Tallinn in an Estonian 16C.

Thereafter, the circuit's second phase of construction saw a dirt speedway course added, alongside karting facilities and a DOSAAF training and sports field. The speedway course in particular was seldom used, there being no real history of this type of racing in the country and seemingly little enthusiasm to promote it.

Between 1978 and 1983 the circuit (which incidentally takes its name from a nearby village; Chayka also roughly translates as 'seagull') hosted the Friendship Cup for racers from across Soviet and Socialist nations, such as East Germany, Czechoslovakia, Poland, Hungary and Bulgaria. This was one of the most prestigious races held behind the Iron Curtain, but these came to an end when the track was deemed unsafe following the death of Polish racer Christian Grokhovsky, after which the event was transferred to Bickernieki.

Thereafter Chayka fell into decline, with fewer races and poor organisation, meaning many events were barely promoted and ran with almost no spectators. As the uneven track surface began to wear in the 1980s, three separate resurfacing attempts were made, which resulted in a series of different asphalt coverings being laid at different times, each with differing levels of grip, which did little to aid the raceability of the track. And the bumps remained with a vengeance.

Gradually, the circuit began to fall towards disrepair, though as the only racing facility in the country, it plodded on hosting national races until Ukraine gained independence in 1991. At this point, ownership transferred to the Defense Assistance Society of Ukraine. The immediate post-independence years proved turbulent and saw many of the resources of the circuit sold off to private owners, including cars and equipment, while monies for maintenance also proved hard to come by and the circuit fell further behind in safety terms.

By 1998, the situation had deteriorated to the point that the 'Big Loop' could no longer be used; instead national level racing had to make do with the 'Little Loop' for all of its events. Then well-known Ukrainian racer Leonid Protasov was appointed director of the sports complex and the situation began to improve once again, little by little.

In the late 2000s, a new pitlane and final corner layout were added to the Little Loop layout, which now also benefited from a number of temporary bleachers for spectators - among the first meaningful amenities for the watching public for many years. A cafe and a hotel on the site have also been added in recent years.

Today, Chayka remains the epicenter of motorsport in Ukraine. The track hosts national championship events, track days, rallies and boasts a permanent racing school. Drag racing is also held along the main straight of the old 'Big Loop', though there still remains no other competitive action on the longer circuit variation.

Autodrom Chayka is located at Chaiky, in Kyiv Oblast, to the west of Kiev in Ukraine. The city's Borispil International Airport is around an hour's drive away to the east of the capital, while domestic and short-haul flights also land at Kyiv Zhulyany Airport, around 30 minutes' drive to the south-east of the circuit.

The track can be reached from the main E40 highway heading west from the city centre. Take the exit at Zviazkivtsiv Street and then continue onto Aviakonstruktora Antonova Street, towards the circuit entrance.

Find the best hotel and flight deals near to Chayka: