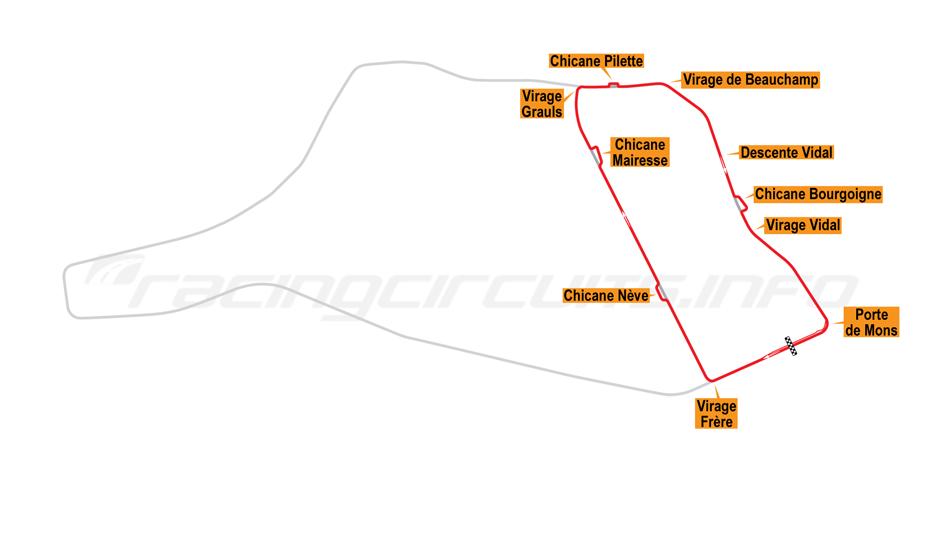 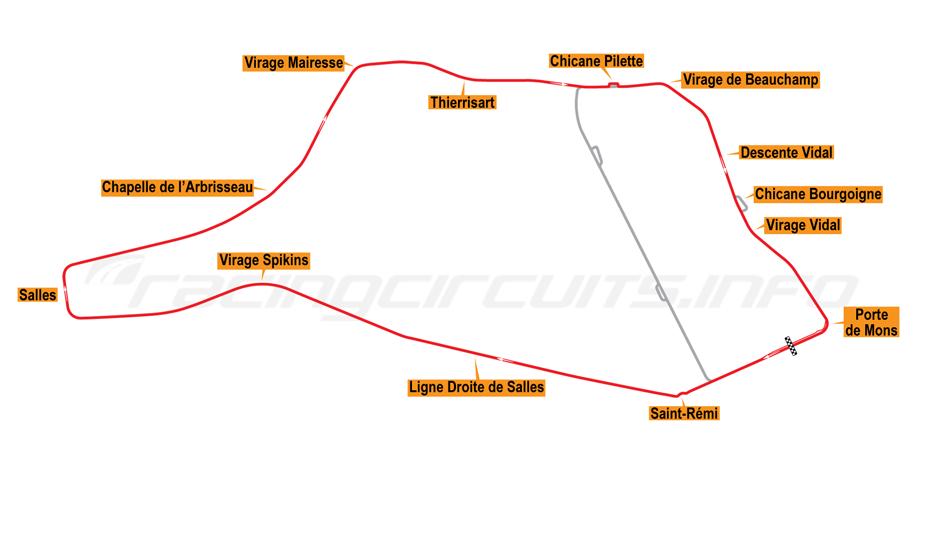 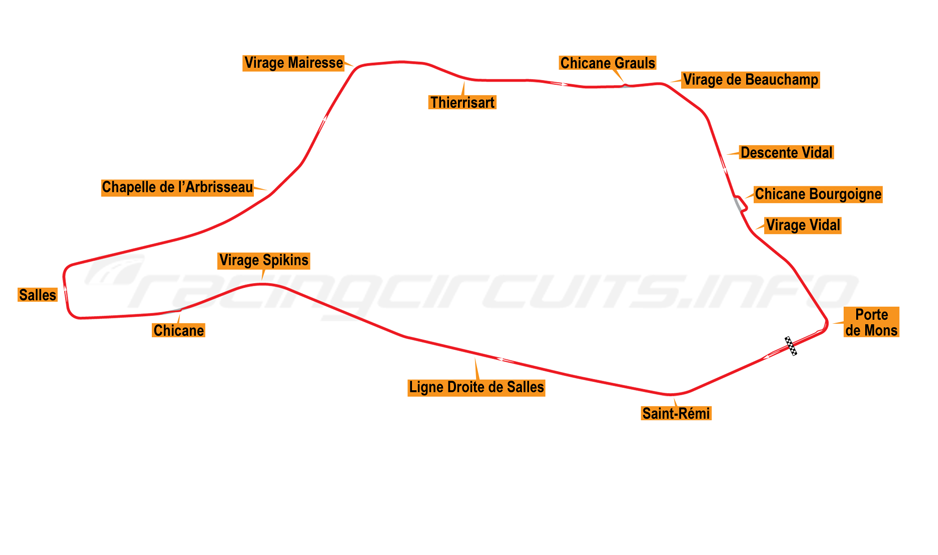 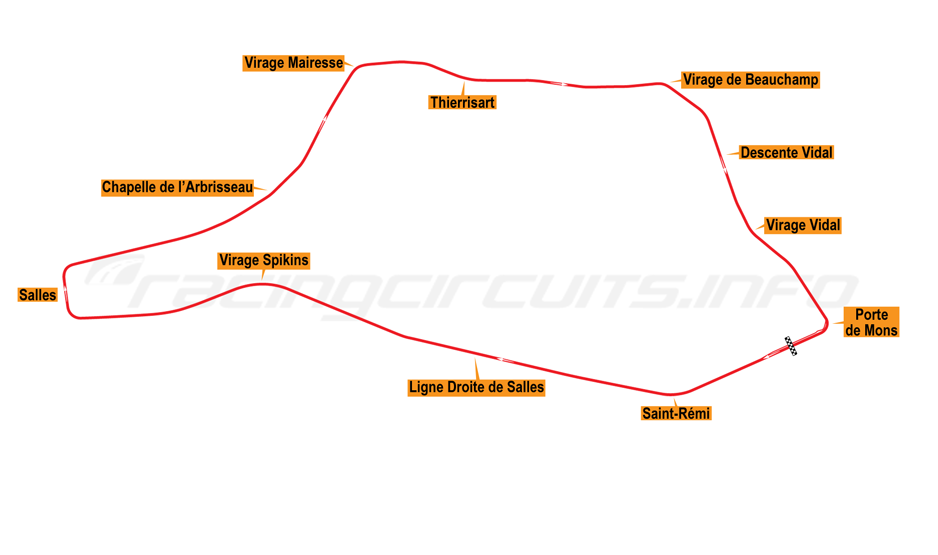 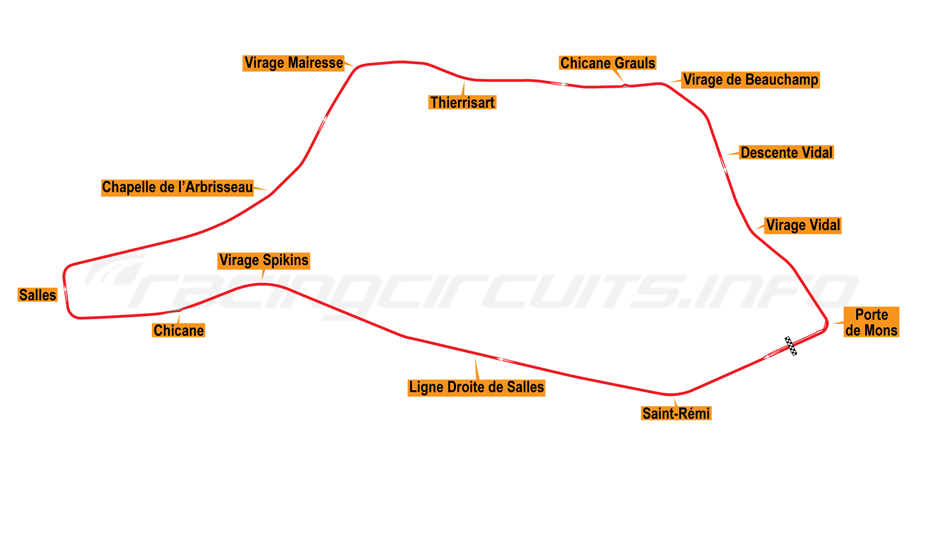 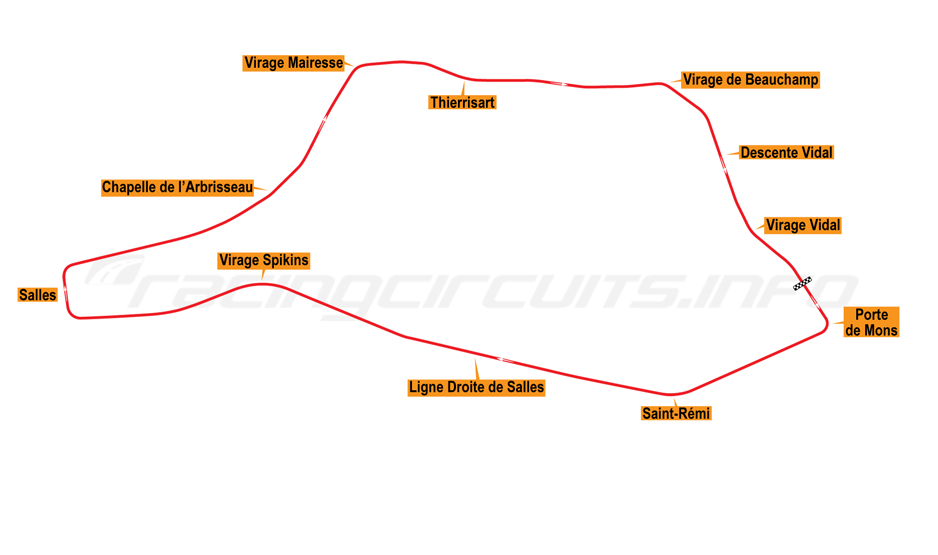 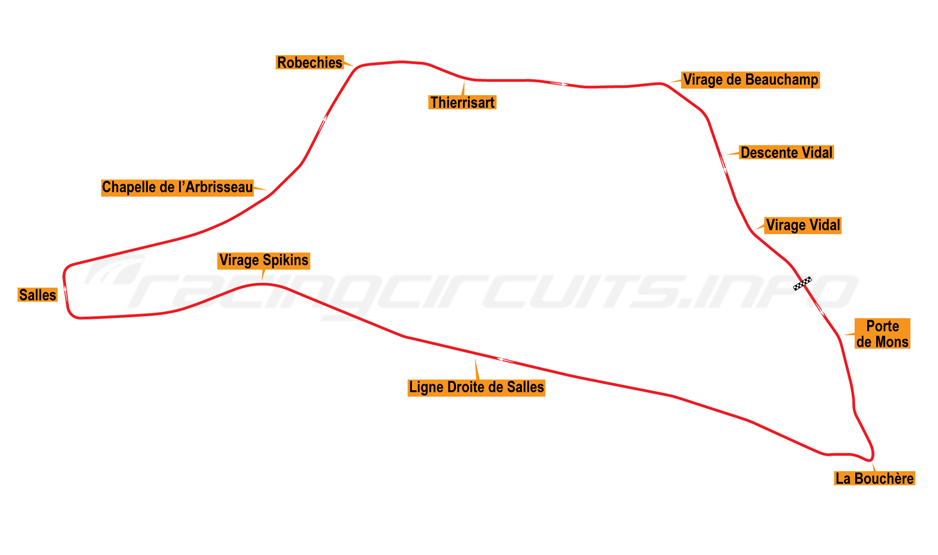 Chimay is the third of Belgium's classic road courses and probably survived longer than other similar circuits simply because of the paucity of alternative venues in the country. It was fearsomely fast – in most countries it would have been the quickest circuit, but in Belgium the original Spa and Mettet courses were faster still – and was also the scene of several horrific crashes. Eventually truncated, it emerged as a much slower and chicane-strewn run around the houses.

The shortened course still has its dangers, as a triple fatality in 2014 sadly proved.  However, the racing continues to the present day, with both the Open Trophy for modern machinery and the Classic Bikes event.  There's also one of the biggest gatherings in the world for the VW lovers at the European Bug-in, which happens every two years.

The story began in 1926, when local motorsport enthusiast Jules Buisseret had the idea to create a race on roads close to the Belgian border town. The first Grand Prix des Frontières took place on a 10.87km course which ran from Chimay to Salles, up past an imposing roadside chapel and on towards Thierissart and over a railway bridge, before turning back to the town, through a series of sweeping bends.

As was common at this time, the event was a combined car and motorcycle affair, with bikes running in the morning and cars in the afternoon. Largely for amateur racers, the event soon drew big crowds, becoming a firm fixture on the Belgian racing scene. Gradually the professional drivers also began to take an interest and the final two pre-war car races were won by Maurice Trintignant in a Bugatti T51.

The circuit remained largely unchanged in its early years, save for the widening of the Thierissart railway bridge in 1935. Racing resumed in 1946, with the same format of car and bike races. More significant changes were made in 1960, when general road improvements led to a reduction of the course to 10.45km. There was no race in 1964, but the event returned the following year and in 1966 the organisers decided to settle on car racing only. Formula 3 duly became the top class, with the likes of Peter Westbury and David Purley tasting victory.

In 1972, the motorcycles returned, though with their own separate race date. On four wheels Belgian driver Ivo Grauls set a lap record of 195.327 km/h in his Chevrolet Camaro touring car. The fast pace was perhaps his undoing however, as he ran off course while passing backmarkers at unabated speed, his car exploding in a fireball as it hit the embankment of the now disused railway. He was killed instantly in a tragedy that marked the beginning of substantial changes in the following years.

Graul's lap record remains the fastest lap for a touring car or sportscar to this day, though an unofficial record was set at the same meeting when Claude Bourgoigne lapped at 204.790 km/h in a Formula 2 car on a demonstration run.

The 1973 Grand Prix des Frontières was the last time bikes and cars were combined, with the cars departing altogether the following year as it became accepted that the circuit was no longer up to the required safety standards. The motorbikes too were achieving some insane lap averages (a new record in 1974 was set by Philippe Coulon at 201.2 km/h) but in 1975 the course was shortened to 9.5km by building a new link road which eliminated the section down to the Bouchère hairpin. Ironically, this made the course even quicker, with Britain's Barry Sheene establishing a new lap record in 1978 at an eye-watering average of 216.456 km/h...

The high speeds were not the only problem – in truth, protection for bystanders was fairly inadequate (though not untypical for road racing at the time), as was vividly illustrated during that same 1978 event. During the 750cc race, Hervé Regout lost control of his Yamaha TZ 750 as he exited the Descente Vidal, the quick right turn before the start and finish area. The French rider was thrown from his bike and was uninjured, but the machine careered on into the pitlane, still at very high speed, striking a group of mechanics, photographers, guests and team members. A 25-year old photographer was killed, while a mechanic later had to have a leg amputated. Eight others were also injured, including Barry Sheene's father Frank, who suffered a double leg fracture.

The incident seriously compromised the use of the famous Tour de Contrôle building at the circuit. After one more year's use, in 1980 the start line was moved to the new link section, where a new timing and scoring tower and pit area – separated from the track by crash barriers – had been added. The iconic old tower building still overlooked the course, though after being used for several years as storage, finally fell out of use altogether. It eventually became derelict and was demolished for safety reasons in 2005.

In 1985, cars returned, initially as part of the Bianchi Rally and then as part of the national production car series in 1986. Temporary tyre chicanes were added at Spikins and ahead of Beauchamp, though these were not used by two-wheeled racers, who lapped considerably faster as a result (though without ever managing to break Sheene's lap record).

In 1990 a third chicane was added at Vidal and by now even the bikers had conceded that the course was now too quick and they too began using the three chicanes. Even so, the circuit still had its dangers, as was brutally highlighted in 1992, when the Belgian Procar event was struck by tragedy twice. At the end of the first heat, the Honda Civic of Michel Maillien left the road and struck a number of spectators, fatally injuring one of them. The event continued, but in heat two, Guy Nève's Porsche 911 tangled with another car as he rounded the Spikins curve, the car being sent into a ditch at unabated speed and exploding in a fireball, finally coming to rest on its roof. Nève, the younger brother of sometime Williams F1 driver Patrick, was killed instantly.

Somewhat amazingly, racing was still allowed to continue, though understandably the Belgian Procar series had lost its appetite for Chimay's dangers. Two further events for the lower-tier ASAF touring car series were held in 1993 and 1994, with the last race on the old 9.5 km course coming in September 1994 being a combined motorcycle/touring car affair.

Time was finally called on the original road race course and work began on creating a newer, much shorter course. This cut out two-thirds of the old circuit, turning off the new link road at a 90 degree curve and along a new straight which rejoined the old course ahead of Beauchamps. At various points were no fewer than four bus-stop chicanes, making the course rather stop-start and much slower. There was some consternation, however, at the design of the new chicanes, several of which appeared to have been designed in reverse of conventional wisdom; with fast entries and slow exits it was questionable whether these caused more problems than they solved.

The new course was inaugurated on 25 June 1995, with contemporary motorbikes returning quickly, and the Belgian Procar Series the following year. However, the four-wheel brigade found the new Chimay to be far from ideal and Procar departed after 1998, though briefly returned from 2001-3. Organisers generally concentrated on bike racing from then on, though a fatal crash in 2004 meant the focus would switch to historic racing on two and four wheels. The circuit briefly lost its car licence in 2006, but regained it for the following season, a final vintage event and a round of the VW Fun Cup being the main events.

In 2008, in celebration of the Trophée de Motos Classic having its 15th anniversary, the old 9.5km course was revived for one further event, though with some modifications to the first corner necessitated by the insertion of a roundabout in intervening years. Only the chicane before Beauchamps was used, allowing the historic bike racers to get a true feel for the circuit of old. The event passed without incident, though the revival of the full course was seen very much as a one off.

In 2009, it was back to the 'new' course, though the following year saw the reintroduction of contemporary machinery, thanks to the arrival of the Open Trophy races, part of the International Road Racing Championships. Sadly, there was further tragedy during the 2014 running of this race, when three riders were killed in separate incidents during qualifying and practice. Nevertheless, racing for the classic bikes and the Open Trophy continues with both events held in July.

Thanks to Rob Semmeling (www.wegcircuits.nl) for much of the information on this page

Planning a visit to Chimay? Find the best deals near to the circuit on hotels, apartments and rooms to rent from the map below.

The Circuit du Chimay is located at Chimay in Belgium, close to the French border. The nearest airports are Brussels South Charleroi (64 km) and Brussels Airport (129 km). Both are well served by a variety of carriers.

The circuit itself is located on the northern outskirts of the town. Events are accessed through the main entrance located on Rue du Grand Prix des Frontières, arriving from the Virelles direction. 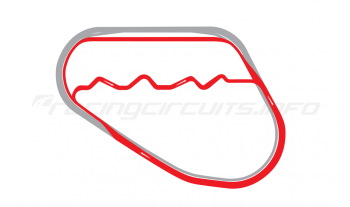 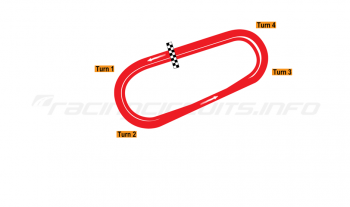 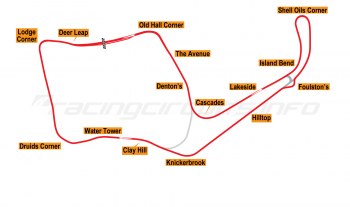