Queensland Raceway emerged on the scene in 1999, a purpose-built facility which quickly usurped Lakeside as the State's most-used motorsport facility.

Home to a round of the Supercars Championship for many years (requiring temporary safety upgrades each time to receive the necessary track licence) 'the paperclip' dropped off the schedule after 2019.  It remains however one of the most active of Australian circuits, with general testing, racing schools and promotional events happening most days of the week.

After many years under the stewardship of John Tetley, in October 2021 a deal was struck for Tony Quinn's Keltic Motor Sport operation to take over the lease, management and operations of Queensland Raceway.  Quinn has big plans to upgrade and expand the circuit to restore it as Queensland's pre-eminent motorsports facility, so a return to the top flight seems highly likely.

The track, near the city of Ipswich in south west Queensland, grew out of a bold decision by the local authority to purchase and dedicate an area of land for motorsport activities in the 1980s. The Ipswich Motorsport Precinct was the result. Located next to a military airbase and several mines, it does not suffer from the same noise or development constraints that other circuits often encounter. Indeed, any racing activity would have to go some to out-do the deafening roar of RAAF Base Amberley's F/A-18F Super Hornets and F-35 Lightnings...

First to be developed on the site was a quarter-mile drag strip, known as Willowbank Raceway. It quickly became one of the busiest such facilities in Australia, hosting annually the Winternationals, one of the largest drag racing festivals in the southern hemisphere.

Queensland Raceway itself was next to arrive, opening in 1999 and quickly earning the nickname of 'The Paperclip' due to its simplistic design. However, the simplicity belies the research that went into the layout, with designer Tony Slattery having considerable input from car and motorcycle racing authorities, including CAMS circuit expert Professor Rod Troutbeck. The philosophy was to provide the maximum length of straights possible within a 3.2km lap distance, thus giving many deep braking zones to encourage overtaking.

"The circuit layout has suffered some criticism over it's simplistic design, but this was controlled by a number of factors that could not be changed; the shape and topography of the site, the FIA design requirements, and the most important - the construction budget," explains Slattery.

"Detailed computer modelling was used to adjust the basic circuit layout and refine the "fit" of the circuit to the site, as well as determine the safe run off required for each corner. All sections of the circuit are 12m in width - that's at least four cars wide when racing."

The full 3.12km National Circuit was designed primarily for the top level classes in Australian motorsport and features four straights of varying lengths to provide a balanced opportunity for passing on each lap. The shorter Clubman Circuit changes from the National Circuit just after exiting Turn 2, when you need a moderate brake to a downhill right-hand connection across to Turn 4.

The Sprint Circuit was designed for road cars as it is easier on the brakes than all other layouts. It follows the same corners as the Clubman Circuit but instead of turning right through the dipper you turn left, entering the intermediate back straight with adverse exit crossfall. The short blast down to the other connection gives you a little time to size up the opposition, before a right turn to the connection and a tightening left hander to join Turn 6.

A fourth variant, the Sportsman Circuit, follows the National Circuit to Turn 3, but on exiting Turn 3 there is a wide, slightly dipped connection on the left across to Turn 6. It was developed with truck racing in mind but is today rarely used.

Supercars puts 'the paperclip' on the map

Among the first events held at the new circuit in its first year was the Queensland 500, the first endurance round of the V8 Supercars season. Russell Ingall and Larry Perkins ran out the winners.

It proved to be the high point for original operators, Motorsport Queensland, which collapsed into administration shortly afterwards.  A consortium of five investors took over, the most notable being former businessman and racer John Tetley.  He had been among the original backers of the project, having contributed the funding to build the pit facilities.  By 2004, he had bought the other investors out to become the sole owner of the facility.

Under Tetley, the track firmly established itself as a race and test venue and is popular with spectators, as the 50-car racing pits and viewing mounds are all on the outside of the circuit, allowing for a completely unobstructed view of the while lap.

Drivers have been slightly less enthusiastic – flat as a pancake, the circuit is no Mount Panorama – and the bumpy surface in latter years drew criticism. Circuit owner John Tetley promised a full resurfacing at the end of 2010, but this had to be postponed by 12 months due to the large scale flooding which affected the State (and completely submerged the Raceway) creating a lack of availability of necessary equipment as devastated public roads were repaired.

Supercars continued their annual visit, though the race switched to a standard sprint round from 2003 onwards.  However, the circuit's operating model was shifting towards encouraging greater grassroots participation, to the extent that by 2009, the Supercars round was becoming something of a financial drain.  In 2010, Supercars took over the promotion of the event altogether, effectively hiring Queensland Raceway for the duration of the race.  It was an arrangement which seemed to suit both parties.

The circuit hit the headlines in 2010 when spectators were lucky to escape with relatively minor injuries when the Mini Challenge car of Kain Magro cartwheeled into the crowd at the final corner during a V8 support race. Circuit bosses insisted that the track was safe and that it had been a freak occurrence – a similar crash the next day proved the worth of the safety barriers.

Sadly, 2013 saw two tragedies unfold at the track; in June, young motorbike rider Chris Mosca was killed when he wash thrown from his bike after clipping another rider during a mid-week test session, then in October British Porsche Supercup star Sean Edwards was killed in a horrific accident while mentoring a young racer on a driver training day.

Plans for redevelopment caught up in scandal

In 2016, plans were advanced by Ipswich City Council for a $220 million total overhaul of the circuit, to create an all-encompassing motorsports park, complete with speedway, motocross track, karting facilities, and even a hotel. This would have required the buying back of leases from Tetley, alongside a major expansion of the circuit layout. The extension would have seen a brand new loop added between the finish line and the existing Turn One, adding a further seven corners to the lap.

Former Supercars administrator Damien White was announced as the manager for the whole project, which was to have operated under the title of Ipswich Motorsport Precinct.

The plans began to unravel spectacularly when Ipswich's mayor, Paul Pisasale, resigned in 2017 following a raid on his office by the Queensland Crime and Corruption Commission.  He was subsequently jailed for corruption and sexual assault offences.  His successor, Andrew Antoniolli, was elected on a transparency agenda and began to review all council-owned companies, ultimately leading to the wind up of Ipswich Motorsport Park PTY Ltd.  While the it was stated that the council remained in favour of the plans and was simply evaluating new ways to achieve them, the project finally hit the buffers when Antoniolli was also forced to resign after being charged with corruption.  While he was later cleared of all charges in court, the council was placed under the control of an administrator by the State Governor and all appetite for a lavish circuit overhaul using public monies quickly disappeared.

Throughout this turbulent period, John Tetley remained in charge, guiding the day-to-day running of the circuit and investing in small upgrades to keep the show on the road, while also entertaining offers to sell the facility.  He often faced criticism from fans for a perceived lack of investment in the circuit, particularly as the circuit was no longer licensed by Motorsport Australia for top level racing, requiring Supercars to put in place additional tyre barriers in place order to gain temporary FIA Grade 3 homologation approval each year.

Tetley was adamant that alternative barrier solutions would be feasible and spent $40,000 organising a test of his own COTA (chain of tyres assembly) barrier system in 2018.  The system was later added to Turn One at the circuit in the aftermath of another fatal collision which claimed the lives of Daniel King and Kurt Bull during an event for street legal drag cars.

After nearly a decade of negotiations, John Tetley and Tony Quinn finally were able to strike a deal in October 2021, which saw Quinn take over the lease, management and operations of Queensland Raceway, while Tetley continues to operate Lakeside.

It brings a new dawn for Queensland Raceway, with Quinn having ambitious plans to upgrade the circuit to bring it to a similar level as the other tracks in his portfolio. Pit lane upgrades are first on the agenda, with new enclosed pit garages to be built, above which will be corporate facilities and a viewing deck, similar to that of another Quinn-owned track, Hampton Downs.

Elsewhere, the cafeteria will be knocked down and a new one built in its place, complete with a shaded outdoor seating area.  Other parts of the spectator will also be given more areas with protection from the sun, while the toilets behind pit lane will also be completely refurbished.

Longer term, track alterations and enlargements are also still on the table, which will also look towards the future of motorsport to include facilities for hybrid and electric racers. The track will, however, continue to cater for all ends of the spectrum, particularly grass roots racing and track days.

The first fruits of the overhaul come in the form of the return to Queensland Raceway of the Australian Superbikes and the Shannon's Nationals in 2022.

Planning a visit to Queensland Raceway? Find the best deals near to the circuit on hotels, apartments and rooms to rent from the map below.

Queensland Raceway is approximately 50 kms west of Brisbane, on the outskirts of the city of Ipswich in south east Queensland, Australia.  The nearest international airport is at Brisbane, less than an hour's drive away. 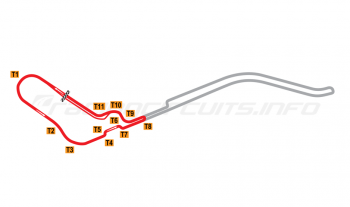 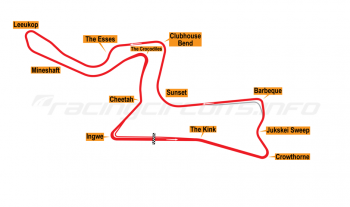 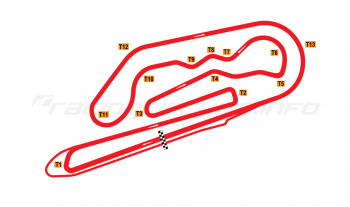