Located just a few minutes drive from downtown Darwin in Australia's Northern Territory, Hidden Valley is a popular stop-off each year for the Supercar circus, when the circuit hosts one of the largest sporting events in the state.

Owned by the Northern Territory Government, the motorsport complex is open year round for local events, testing and track day activity.

The 94-hectare facility also includes a 1km ANDRA drag strip, which sits alongside the main straight of the racing circuit; a clay oval speedway, known as Northline Speedway; and a kart circuit.

The origins of the circuit lie with the drag strip that sits in its centre. From the early 1960s, the popularity of hot rodding was growing, with events promoted by the King Cobra Rod and Custom Club. In 1969 this was renamed the Hidden Valley Drag Racing Association, with the aim of promoting the sport in the Territory.

Drag Racing initially commenced at the Hughes Landing Field – an abandoned WWII bomber strip – located south of Darwin, but soon after found a home at another former airstrip at Livingston, next to the Stuart Highway, around 54km from Darwin.

Despite the relative lack of facilities and its isolated location, competitions thrived at Livingston, with regular crowds in excess of 1,000 spectators coming out to watch up to 60 competitors.

By the early 1980s, the strip had seen better days after nearly 40 years of use and the surface became unsafe for the higher powered cars and bikes. From 1973 onwards, the search began for a replacement venue, preferably much closer to Darwin. Perhaps unexpectedly, drag racing got some influential support when Northern Territories ​​Chief Minister Marshall Perron threw his weight behind plans to build a permanent new facility. In 1979 he announced that a site 15km from the city centre at Hidden Valley was to be developed for the sport and there seemed to be cross-party support for the idea.

Livingston soldiered on for a few more years but the end was not far away, hastened by plans for the future widening of the Stuart Highway. A highly successful final meeting was held in August 1983, with work on the first stage of the new Hidden Valley strip commencing the following year. The quarter mile raceway was built to full international standards, completely level over the full quarter mile distance, and then having a one percent crossfall to the south from the finish line.

The following year saw the opening of the second phase of the site, which saw the establishment of a full racing circuit, which followed much the same layout as today’s course, albeit with the front straight utilising the drag strip along its entirety. Facilities were simple and the circuit was something of a dust bowl, only really suitable for local racing.

It was not until June 1997 that it truly came of age, when a deal to bring the Australian Touring Car Championship to the Northern Territories for the first time was announced. Suddenly, the race was on to dramatically upgrade the Hidden Valley circuit and the government allocated a budget of $2.5 million to overhaul facilities to CAMS and Motorcycling Australia standards.

Among the major changes was the creation of a new main straight, running parallel to the drag strip and allowing the latter to become a fully dedicated facility, complete with the ability to prepare its surface specifically to suit drag racing.

With the support of V8 Supercars chairman Tony Cochrane, racing legend Dick Johnston and the Shell Company, the first Hidden Valley round was an enormous success, drawing praise from competitors and fans alike. The factory Holden cars of Mark Skaife and Craig Lowndes dominated the opening race, only for Skaife’s engine to fail in the run to the line, letting Lowndes swoop past for the inaugural Supercar victory.

More drama followed for the second race, when Skaife’s engine change couldn’t be completed in time and Lowndes was similarly unable to restart his Commodore’s engine. It led to the rather unusual sight of the front row being absent from the starting grid. That left the Perkins-run Commodore of Russell Ingall to take the second and third race wins and run out the round winner.

The Supercars championship has been an annual returner ever since, with the ‘Triple Crown’ usually held in late June or early July, when the temperature is cooler in the 'dry season'. The unusual coronavirus-affected 2020 season saw the track host back-to-back events on consecutive weekends for the first, and so far only, time in its history.

Various upgrades have taken place over the years, although the configuration of the track has not been changed. In 2005 the size of the pits was doubled with the introduction of a new ring road, the building of a dedicated inspection bay and storage shed, as well as the erection of a new safety fence between the spectator mound and pit area.

The armco-barriers which lined either side of the drag strip were upgraded with concrete barriers with the aid of a Federal grant in 2010, while a more extensive programme to remove the earth-filled tyre walls which lined the circuit from Turns 1-4 was also announced. The $9.5 million programme saw these replaced with new concrete retaining walls over the next few years, as well as an entire track resurfacing in 2014.

Planning a visit to Hidden Valley Raceway? Find the best deals near to the circuit on hotels, apartments and rooms to rent from the map below.

Parking is available at the circuit, with shuttle bus facilities operating during Supercars events to ensure easy access to all spectator areas. 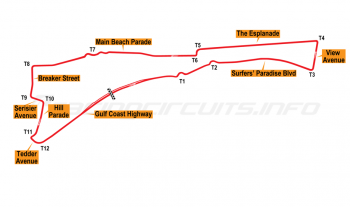 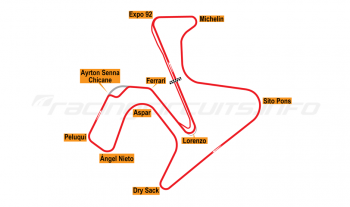 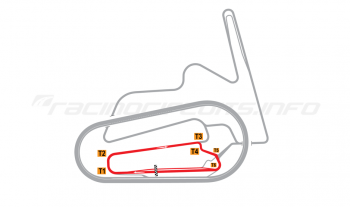