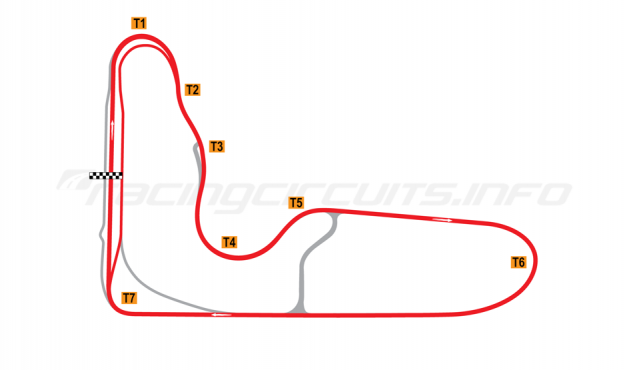 Barbagallo Raceway at Wanneroo is Western Australia's only permanent racing circuit and has been operated continuously since 1969, providing a base for the racing scene in an otherwise under-served part of the country.

Owned and operated by the Western Australian Sporting Car Club, the circuit originally known as Wanneroo Park owes its existence to Government intervention. The club had long been organising state-wide racing activities on a variety of street tracks, before and after World War II, finally settling at the former RAAF airfield at Caversham. Indeed, the 1962 Australian Grand Prix was held there, an event for which expensive upgrades nearly became the undoing of the club. After paying off its debts all seemed well, until news reached the club that the Commonwealth was to reclaim the former airbase in 1968, leaving WASCC with nowhere to race.

Fortunately, the Club's then Vice President Max McCracken had served with the Commander of Western Command in the war and was able to get an assurance from the Department of the Army that racing could continue at Caversham throughout 1968, with the Club welcome to salvage what it could once racing had ceased. With a stay of execution secured, the hunt was on to find new land on which to build a circuit.

Help in this task was at hand from another bigwig, this time in the form of MP Herb Graham (who would within a few short years become the state's Deputy Premier). He had been a member of the club and an enthusiastic supporter for some time and went to considerable effort to help.

Soon a tract of land in Wanneroo area was identified and the Shire of Wanneroo quickly agreed that the land should be declared an 'A' Class Reserve. A short time later Graham informed the club that the Governor's signature was attached to a document changing the usage designation of the land from quarrying to motor racing, meaning planning of the new circuit could begin in earnest.

Most of the funds were raised through a loan obtained from the Shire of Wanneroo plus the sale of advertising rights to local companies. After consulting club members and studying other circuit layouts, McCracken devised a layout and the task of constructing Wanneroo Park could begin. Over an eight month period McCraken supervised the contractors, ensuring that the project would be completed on time. All the while, racing continued at Caversham, with its final meeting held in October 1968, Norm Beechey winning in a 327 Monaro.

Despite some naysayers predicting the new circuit would not be ready, club volunteers pitched in with the final preparations and, by March 1969, racing would resume at its new home. A low key opening event was planned as facilities were not quite up to accommodating a capacity crowd but, in the event, more than 6,000 turned up at the gates, where the hapless ticket sellers gave up and quite their posts after letting 4,600 through...

These teething troubles were soon ironed out and Wanneroo soon began to thrive. An annual highlight for several years was a six hour 'Le Mans' race for sports cars and sedans, after which production car racing held sway, including rounds of the Australian Touring Car Championship in 1973 and then regularly from 1977 onwards.

In 1979, the circuit underwent its first upgrades, with the opening of a new pits and paddock facility on the western side of the circuit. The start/finish line was relocated a result and a new control tower constructed opposite the pits to house race control and other officials. The first race to sample the new pits was the Australian Grand Prix, which saw a spectacular crash between Larry Perkins and Alf Costanzo at the first corner.

Touring car racing became the most prestigious event each year during the 1980s but, save for some minor tinkering with the pit lane entry, the circuit remained unchanged until 1992. At this point the Club decided to build a short course in order to boost the range of racing that could be held. Truck racing was a prime target, as was night racing, and a new circuit variant was an attractive alternative for the various Western Australian championships based at the track.

Substantial funding for the construction work came from long-time sponsor Alf Barbagallo, after whom the track was renamed, becoming officially known as Barbagallo Raceway Wanneroo. The new 1.7km short course diverted right from Turn 5, through a kink and then rejoined on just after the mid point of the back straight. Truck racing duly arrived during 1992 and the first night races began in February 1995.

Further upgrades came in 2002, when a much-widened pit lane was created, necessitating a reduction of width in the dividing grass verge along the pit straight. While much less cramped than before, it still lacked any permanent garages, a fact that would become a bone of contention in later years.

By 2004, the original track surface was in need of refurbishment and a $500,000 upgrade was carried out, with around half of the funding coming from the State Government. The new surface proved much more grip than the old surface which was notoriously hard on tyres and lap times inevitably tumbled.

By the end of the decade, V8 Supercar grumbles about the paddock facilities were coming to a head and the category announced that it would not be returning in 2010 unless substantial upgrades were forthcoming, despite it being the only race in Western Australia. As a not-for-profit club, the WASCC could not fund such alterations alone and the event was duly dropped at the end of its contract when Government funding could not be secured in time, much to the consternation of the 60,000 fans who regularly attended the race.

The Western Australian Government pondered options to create a new circuit altogether or to extend or upgrade Wanneroo. Options for a northern extension – which would have almost doubled the length – were discussed and ultimately dismissed, as were proposals for a more modest extension. Finally, State Premier Colin Barnett approved funding to construct a new pit and paddock complex opposite the existing pit facilities, pledging AUS $10.5 million for upgrades over five years. The deal also saw the Government's events promotions arm take on promotion of the event jointly with V8 Supercars, allowing a return for 2011.

Construction of the new facilities would not begin until July 2011, when the old control tower was torn down and contractors moved in to build the new permanent garages, race control and media facilities. A pedestrian bridge over the start-finish provided access to the infield for the first time. The original pit lane and paddock facilities were retained and remain in use for the majority of non-Supercars meetings.

The whole track was resurfaced in time for the 2019 season, with the addition of a new 'bus stop' chicane at Turn 3 for use during motorcycle meetings, allowing a previous ban on two-wheeled activity to be overturned. The year also brought the debut night Supercars event, the first to be organised and promoted directly by Supercars Australia, rather than WASCC.  To illuminate the track, Supercars brought 41 lighting towersand five floodlights around the course, in what proved to be a very successful experiment, which is likely to be repeated in future.

Aside from its now secure Supercars round, the circuit holds numerous state championship and club events, sprint and drifting competitions and a members tuning day three times a month. In addition, it is busy most days of the week for private testing, commercial events, driver education and use by the local police department for training its new recruits.

Barbagallo Raceway is situated just 40 minutes north of Perth in the shire of the City of Wanneroo. The nearest airport is at Perth, around a 45 minute drive south of the circuit.

Other than at the time of the annual V8 Supercar race, there are no public transport options to take you to the circuit, so arriving by car is a necessity. Ample parking is provided at the venue.

Heading from Perth, there are two main options. You can head north on Mitchell Freeway, then turn right onto Burns Beach Road. Follow this east crossing Wanneroo Road, continuing along Joondalup Drive for about 5 kms until you see the 'Raceway' signpost and turn left into Old Yanchep Road. Continue for circa 8kms along Old Yanchep Road and then follow the signs turning left into Wattle Avenue and continue to the end where you will find the entrance to the circuit.

Alternatively, head north along Wanneroo Road until you meet the crossroads intersection with Joondalup Drive. Turn right into Joondalup Drive and then continue as detailed above.

Find the best hotel and flight deals near to Barbagallo Raceway Wanneroo: