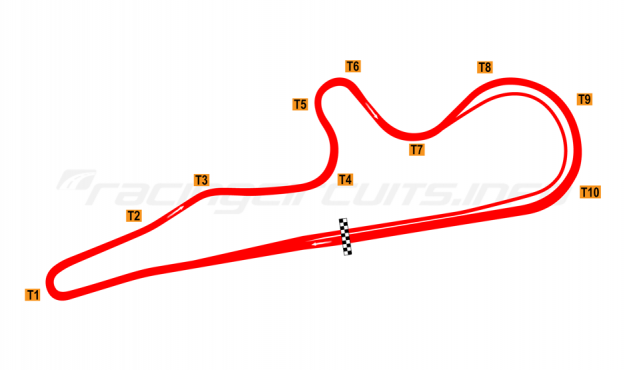 Taebaek Racing Circuit was the second permanent facility built in South Korea, opening in April 2003. Set in a mountainous region away from the larger metropolitan areas, it is also sometimes known as the 'Zongyong Circuit' after its designer's name.

Looking for all the world like a scaled-down version of Fuji Speedway, Taebaek is a largely flat circuit, seemingly carved into a mountain valley. As backdrops go, it is fairly spectacular and, while the layout may be fairly simple, the circuit boasts good facilities, including a grandstand which seats around 3,500 spectators.

The first car racing held at the track was the Korea Formula Touring Car Championship (KFTC) on May 5, 2003, along with the ceremony to inaugurate the circuit. A Korean Motorcycle Road Race Championship event was held on the same day. The circuit's relatively remote setting has hampered its ability to make a major impression on international motorsport, though the Asian Festival of Speed visited in 2005 and the Japanese Super Taikyo series came across the waters for a one-off race in 2007.

Domestic racing has thus been the circuit's staple and, after the Everland Speedway closed for refurbishment in 2008, it became the country's only major circuit, prior to the building of the Korea International Circuit and Inje Speedium facilities. The Korean RV Championship and CJ Super Race events remain as the major events today, while a major staple of its year-round activities are manufacturer demonstration and track days.

The circuit's location, in a mountainous and fairly remote area of the country, means it is not easy to get to. Taebaek is the nearest city, around 25 minutes' drive to the north.

By car from Seoul, take the Yeongdong expressway and get on the S. Wonju interchange. Go past the Jecheon tollgate and you'll be able to see Yeongwol/Danyang on your left. When you reach the interchange, take the right-hand lane and follow the signs to Yeongwol then the signs for Taebaek.

The railway is another way to reach Taebaek, with services taking around 3 hours 30 from Incheon. From Taebaek it is then best to get a taxi to the circuit.

Find the best hotel and flight deals near to Taebaek Racing Park: