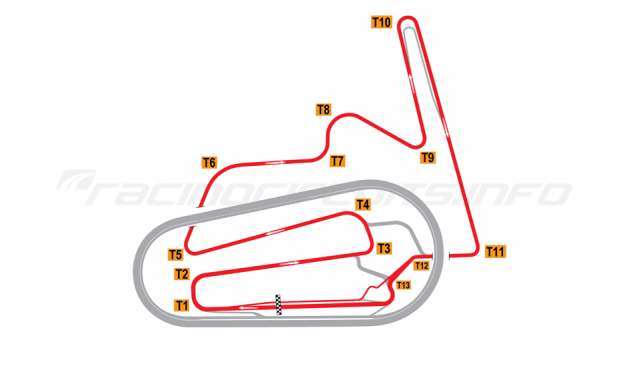 If ever there was a project to symbolise dogged determination against huge odds, then the Twin Ring Motegi circuit would be it. Built by Honda as a facility to showcase its products to both its customers and the wider world, it was more than 10 years in the making and constructed on a size and scale unsurpassed anywhere across the globe.

It can trace its origins back as far as 1986, when a group within the motorcycle sales division of Honda decided they needed a new strategy to engage customers. They came up with a forward-looking project would see collaboration with dealers across Japan to create a nationwide network of facilities where motorcycle users could enjoy riding their bikes. As a centrepiece would be one mega-facility; a centre of international scale where visitors could also indulge themselves in the enjoyment of cars and power products, in addition to motorcycles.

The dealer programme quickly gained approval from senior management, but the calls for a major motoring centre took considerably longer to gain traction. A 'Motor Track' project group was set up to examine the feasibility further, headed by Yozo Yoshida. The group evaluated numerous sites and continued to press management within Honda's internal bureaucracy for support.

Eventually, one site – at Motegi-machi in Tochigi Prefecture – was selected. It seemed an unlikely spot, being perched in a hilly landscape near to the town, which was recovering from disastrous flooding that had washed away 80 percent of its riverside buildings only the year before. Nevertheless it has several advantages; its amphitheatre location would channel sound upwards rather than out towards the local community, it was reasonably close to Tokyo and the land was relatively cheap.

Before giving approval, Honda Vice-President Koichiro Yoshizawa went to visit the site. He was convinced of its merits but knew that to transform it as intended would require a large capital funding and that any such project could only be seen as a very long term investment. On March 31, 1988, the green light was finally given to the project, with then Honda President Tadashi Kume saying: "I want you to work on this project from a long-term, international perspective. I want you to create a facility of ample scale that can foster our dreams."

Honda began a programme of patient and diligent negotiations with the Motegi community and by December 1990, the necessary purchases had been made and the project inched further forwards. Outline plans were put forward for consideration to local authorities, but by the time the final plans were submitted, the project had taken on a new direction. A visit to the USA by the project team had seen them amazed by the popularity of oval racing and struck by the fact that at facilities such as Charlotte, spectators could see the entire course from the grandstand. An oval course would thus form an integral part of Motegi's plans.

Approval was granted for the new 'Twin Ring' road and oval concept, but the downturn in the Japanese economy looked set to threaten the project altogether. The initial investment required would be massive and pressure was on to cut costs. By happy coincidence, Honda's board had also approved an engine programme for the CART Indycar Series for 1994 and against this backdrop, having a home track to test and showcase the Indycar programme brought enough business synergies for final approval to be given. Honda President Nobuhiko Kawamoto duly announced the construction of Twin Ring Motegi in January 1995 at the annual New Year's press conference.

The ground preparations were an immense undertaking, requiring the levelling of hills and regrading of lowland areas. A total of 1.3 million cubic meters of earth by volume was redistributed to raise the ground level by as much as 65 meters in some spots. It remains the biggest construction project ever financed by a single, private company in Japan. Motegi-machi, whose population was a modest 18,000, suddenly found itself playing host to 800 construction personnel, 280 trucks, and seven 70-ton dump trucks with giant tyres. Honda kept the site open to visitors during the long period of construction and at its conclusion, more than 15,000 had come to see the spectacle.

The collapse of Japan's fabled bubble economy, at first a threat to the very existence of the project, soon provided an unexpected advantage; the recession brought down rental charges for large construction machinery, as well as the costs of various construction materials to a point well below the original estimates. This created a surplus in a budget that should have been barely enough for the race tracks alone. The extra money was used to build stands for spectators.

On July 31, 1997, more than 10 years after the project first began, Twin Ring Motegi opened for business. More than 2,000 people including, the landowners, local residents, government officials, construction personnel, and staff and representatives from Honda, gathered for a ribbon cutting ceremony. The complex boasted the two racing courses, a safety and riding school, additional dirt oval, kart circuit and by the following year would also boast a hotel, restaurant, shops and event halls, including the impressive Honda Museum which houses thousands of motorcycles and cars documenting the Japanese factory's illustrious racing history. Today the facility employs some 300 staff.

The oval circuit attracted its first international event in 1998, when the Champ Car series visited for the first time. The low-banked egg-shaped course was unusual with turns three and four being much tighter than turns one and two, requiring drivers to downshift. Mexican driver Adrian Fernandez took victory, in the first of five visits before the race switched attention, like its owning company, to the IRL in 2003. Dan Wheldon was the first driver to win with a Honda engine the following year, while 2008 saw Motegi hit the headlines when Danica Patrick surged to victory, the first in Indycar competition for a female competitor.

Indycar races continued until 2011, when a large earthquake across Eastern Japan caused damage to the facility, including subsidence on the oval course which rendered it unsuitable for motorsport. A switch to the road course ensued, albeit with the oval pit lane continuing to be used, requiring new entrances and exits to be constructed. Following the event, Indycar decided to end participation in long-haul overseas races, preferring instead to focus on its domestic calendar. The damage to the oval is difficult to repair so it is unlikely to ever be used in competition again.

The Honda Collection Hall is available to 'walk through' on Google's Street View? Find it here.

NASCAR also briefly dabbled with the Motegi oval in 1998, hosting an exhibition race at the end of the season, won by Mike Skinner. The following year the Winston West Series held the race as its series finale but due to high costs for transport to the event and poor attendance, the series did not return.

While it shares garage and grandstand facilities with the oval course, the road course is otherwise entirely separate, passing underneath the speedway at two points and disappearing off to the east, unseen by the spectators in the main grandstand. Despite this drawback, it is by far the busier of the two circuits, with Formula Nippon visiting twice a year, Super GT and Super Taikyu cars once each and local events almost every weekend. Two shorter courses can be made, using connecting roadways, with the eastern external course having the benefit of its own pit and paddock. The short courses are usually used for junior formula events, such as Formula 4 and FJ1600.

The road course is also a popular motorcycle racing track, with the MotoGP visiting once a year and now forming the headline international event, as well as several Japanese national bike racing series. Motegi hosted the Pacific Motorcycle Grand Prix from 2000 to 2003 and the Japanese Motorcycle Grand Prix since 2004.

Twin Ring Motegi Circuit is located in central Japan,  approximately 100 miles north Tokyo,23 miles east of Utsunomiya and 25 miles north-west of Mito.   The nearest interentional airport is Tokyo's Narita, 84 miles to the south and around 2 hours 20 minutes drive away.

To reach Motegi by road from Tokyo, you have two options: