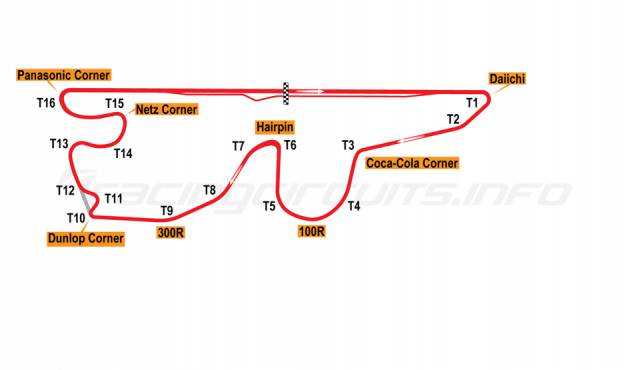 Fuji Speedway began life in unusual circumstances, when plans for a NASCAR-style oval set in the foothills of the famous mountain were put forward in the early 1960s. With Honda's Suzuka test track already established, the new facility would also provide the other manufacturers of the burgeoning Japanese motor industry another track to test their two and four wheeled machinery.

Despite being as far removed from the Deep South as it could possibly be, the plans had serious intent, with the formation of the Japan NASCAR Corporation in 1963. An exclusive contract to host the stock cars in the Far East was also secured.

By June 1964, a 1.5 million square metre site had been identified and bought, with construction beginning almost immediately. The design took its inspiration from the Daytona Speedway and was to feature two long straights connected by banked corners. The first of these banked corners was well under way when a visiting Stirling Moss, invited by the Japanese to view progress, told circuit bosses that he thought it was unrealistic to complete an oval circuit in such mountainous terrain and had some reservations about the design to date.

History doesn't record whether this was a decisive intervention; with construction costs mounting, there wasn't enough money to complete the second banking even if they had been determined to do so. Plans were revised and the circuit completed as a road course, overlooked by a giant grandstand on the long main straight. The change in plans forced an abandonment of the NASCAR contract, although the Speedway name remained. In October 1965, the Mitsubishi company acquired a controlling interest in the project.

Despite now being a more conventional road course, the original Fuji was still fearsomely fast. The almost mile-long straight lead onto the banking in a clockwise direction. Unusually, the cars rose over the crest of a hill before dropping down into the banked right hand corner. Only a layer of armco barrier at the top prevented complete disaster – and often didn't.

The circuit opened in December 1965, though racing did not get under way until the following year. Among the first international stars to sample the course was Jim Clark, who was flown in to take part in a Formula Three race. The American connections remained, despite the loss of NASCAR, in the shape of the USAC Indycars, which held the Fuji 200 exhibition race in October 1966. Jackie Stewart took victory ahead of Bobby Unser. Can-Am also visited in 1968, choosing to run the course in an anti-clockwise direction, possibly to alleviate the dangers of the high-speed entry onto the banking.

Those dangers became all the more apparent when the course was run in its normal clockwise configuration. Several monumental accidents occurred in the early years, but the fate of the banking was sealed in 1974, when drivers Hiroshi Kazato and Seiichi Suzuki were both killed in a fiery accident that injured six other people. A new downhill hairpin bend was installed at the end of the main straight which bypassed the Daiichi corners and rejoined ahead of the Suntory corner. Then banking was never used again.

In 1976, Fuji scored something of a coup by securing the Japanese F1 Grand Prix and, as luck would have it, it turned out to be among the most dramatic races of all time. The season had proved a year-long duel between the charismatic McLaren driver James Hunt and Ferrari star Niki Lauda, who had made a miraculous recovery from his Nürburgring crash. Going into the season finale at Fuji, Lauda was ahead by three points and, with a massive live TV audience on hand for the first time, anticipation was high.

Race day morning threw up the kind of weather that has sadly been all too familiar over the years at Fuji – torrential rain and fog. After many delays, the race finally got underway in extremely poor conditions and Lauda, with a greater perspective than most on the relative merits of taking such risks, elected to retire after one lap. The title was Hunt's for the taking, but as the track began to dry out he overheated his tyres and was forced to pit with a puncture. What followed was a stunning fight back drive, which eventually saw a disbelieving Hunt claim the third position he needed to take the F1 crown.

Fuji's place in F1 folklore seemed assured, but tragedy was to ensure it was short-lived. During the 1977 race, Gilles Villeneuve collided with Ronnie Peterson's Tyrrell and his Ferrari speared into a crowd of marshals and photographers who were stood in a restricted area, killing two of them. F1 didn't return the following year.

Into the 1980s, Fuji remained a largely national venue, with a yearly visit of the World Endurance Championship the main event of note to attract international stars – even then, much of the grid was filled with local cars and drivers. Fuji's facilities were starting to become dated and its safety record – always slightly questionable – came under the spotlight again thanks to several fatal accidents, including the death in 1983 of the promising Toru Takahashi at the final corner.

In 1984, a chicane was installed prior to the final corner in order to slow cars onto the straight, while in 1986 the first corner was squared off and tightened, followed the year after by the insertion of a chicane at Suntory.  From 1993, motorcycle racers also used a third chicane ahead of the 2300R corner. The installation of a large gravel trap at Turn One lead to the severing of the abandoned banking from the main straight.

Pit facilities were upgraded, but by the late 1990s, safety concerns were mounting. A fearsome and fiery crash involving Tetsuya Ota highlighted inadequacies in marshalling and race organisation at the circuit, Tetsuya-san largely being saved by a fellow competitor from the blaze. He suffered horrific burns and later successfully sued six race sponsors and promoters, including Fuji Speedway.

In October 2000, the Toyota Motor Corporation completed a buy-out of the facility from Mitsubishi and announced plans to redevelop the circuit to Formula One standards. Hermann Tilke was brought in to develop the proposals and in 2003 the circuit was closed down to accommodate a major reprofiling.

When it reopened in 2005, an ultra-modern facility had sprung up, with a layout which broadly followed the original, save for the seemingly endless final corner, which was now replaced by a low-speed arena section. Most of the old banked section of track was demolished save for a small section which was preserved, fenced off and acting as a permanent reminder of a very different era of racing.

Toyota got the chance to show off its Formula One cars at its home venue in 2007 and 2008, though in both cases the Fuji weather demons were in full play, causing numerous delays and affecting the race weekends adversely. Following both poor ticket sales, it was decided by FOM that the FIA Japanese Grand Prix would be shared between Fuji Speedway and Suzuka on alternate years. Suzuka duly held the 2009 race, by which time the global recession had hit Toyota hard and it decided to pull out of all of its Formula One obligations.

Fuji thus found itself reverting to a largely national schedule of events for the second time in its history. In another repetition, its major race today is the visit of the World Endurance Championship (where home fans can again cheer on the Toyota team), though even that has not been without its dramas, 2013's event having to be abandoned due to poor weather after just 16 laps had been completed, all of them under the safety car.

Unlike many other international top-level tracks Fuji has always encouraged the sport of drifting, allowing the D1 series to run one or two rounds there each season. Furthermore Fuji Speedway also offers a small separate drift track inside its grounds as well as a smaller "Short track" which is used for track day events and driving courses.

As well as national-championship events, Fuji also hosts the popular Nismo Festival and Toyota Motorsport Festival and the circuit is available for enthusiasts to lap when no racing or testing events are being held.

Fuji Speedway is located in the foothills of Mount Fuji, in Oyama, Suntō District, Shizuoka Prefecture, Japan.  The nerest major international airport is Tokyo's Haneda (105km away) but Narita offers better transport links to Fuji.  For domestic connections and flights from China and South Korea, the new Mt. Fuji Shizuoka Airport is a third option, the closest to the track at 88km.

Details of the best routes to the circuit by road or rail can be found on the English language version of the circuit website.   If arriving by train, there are regular buses from Gotemba Station (everyday) and Suruga-Oyama Station (weekends only).  Alternatively, a taxi ride from either station takes about 20 minutes and costs around 3500 yen (one way).