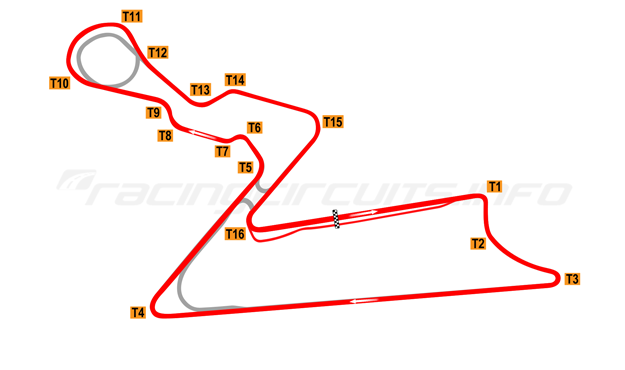 India's third purpose-built motor racing facility was designed to capture the Formula One circus and is consequently on a scale unlike anything found elsewhere in the country. It forms part of the Jaypee Greens Sports City, a 1011 Hectare development of homes, leisure facilities and sporting stadia including a golf course and equestrian centre.

The Herman Tilke-penned circuit covers 3.192 miles, and includes 16 turns with some noticeable changes in elevation. Construction was completed in October 2011 just two weeks prior to the first Indian F1 Grand Prix. The facility, which is spread over an area of 874 acres, cost around $400 million to build, and includes seating for around 110,000 spectators, with the potential to increase capacity to 200,000 in the future. The track surface includes asphalt and aggregated specially shipped in from England.

It has generally been well-received by the Formula One drivers with the fast, flowing sections between turns five and 15 in particular drawing favourable comparisons and proving a challenge to drive consistently on the limit.

"Most modern tracks have a very similar feel; you find that the same driving style and rhythm suits them all. But the Buddh International Circuit is different: it has more in common with a great track like Spa than it does with any number of the more modern places we visit."Lewis Hamilton

A date change to an early season slot on the calendar has led to the removal of the race from the 2014 F1 calendar, with the promoters citing concerns it would fall too soon after the October 2013 event - though many also felt that other reasons may have played a factor, including dissatisfaction from the F1 crowd at India's bureaucratic customs laws.  Whatever the true reason, it failed to reappear in 2015 and has be absent from international calendars ever since.

Other series have yet to fully commit to the venue; the FIA GT1 World Series was due to host its 2012 season finale at the Buddh circuit but subsequently cancelled, while the expected debut of the World Superbike Championships in 2013 was also postponed to 2015 over a disagreement about the circuit operation charges, then dropped altogether.  Local racing now makes up the only circuit activity.