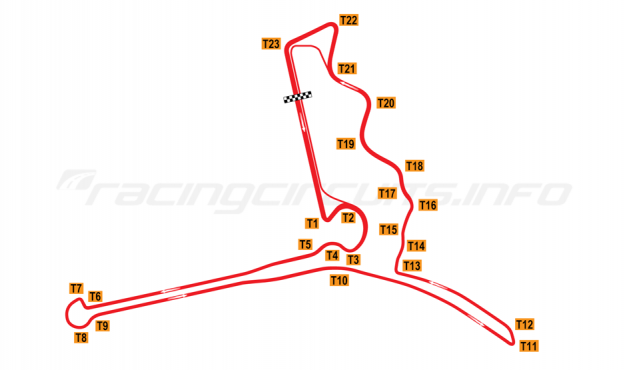 The Hanoi Street Circuit (Vietnamese: Đường phố Hà Nội) is the latest venue in F1's Asian odyssey and the first major international circuit in Communist-controlled Vietnam. The part temporary, part-permanent course winds around the Nam Từ Liêm district of the capital and was scheduled to join the F1 calendar in April 2020, until the Coronavirus pandemic caused its cancellation.

Located next to the Mỹ Đình National Stadium, when complete the circuit will be able to boast one of the longest straights on the calendar at 1.5 km (0.9 mi) in length. Almost inevitably, the circuit has been penned by F1's architect-in-chief Hermann Tilke and will include some existing roads as well as newly-constructed ones along its length. The aim was to create a unique hybrid layout, fusing a street circuit's 'closed-in' characteristics with the benefits of the more open feel of a traditional circuit but all within the confines of the city's topography.

Turns 1 and 2 are based on the opening corners at Germany's Nurburgring, with the aim of producing a clear overtaking opportunity. Turns 12 through to 15, meanwhile, have been inspired by a section of the famous Monaco street circuit, from Turn 1 and the run up the hill to Massenet.

The Turn 16-19 sequence that follows features fast changes of direction reminiscent of the sweeping iconic Esses at Suzuka, while the final three corners take inspiration from Malaysia's Sepang – the fast left-right followed by a tightening radius entry.

That tricky and challenging final sequence, which completes the lap, offers the potential for mistakes and opens the door for a chasing driver to pick up a slipstream and launch an attack into the first turn.

Quite how successful the end result becomes remains to be seen, though it has not been without considerable thought. The Hanoi Feasibility Group provided suggestions of potential locations, track layouts and associated CAD (Computer Aided Design) data to F1's Motorsports team, who subsequently built a simulation model of the circuit to carry out lap simulation analysis.

It was at this stage that anticipated car speeds, G-forces and the overall flow and characteristics of the circuit could be assessed.

The final design will be the culmination of a collaboration between F1's Motorsports team, Tilke, the City of Hanoi authorities and the race promoter, with governing body the FIA also part of the process.

Groundbreaking for the new circuit began in March 2019, leaving just over a year to finalise the construction for it to make its April 2020 race debut.

In December 2020, organisers revealed an updated layout for the track to take account of updated advice on safety. The final section of the lap has been reconfigured, with a 23rd corner added and the track widened by around 15m. Where before the final two corners were a quick left followed by a much tighter left, the track now winds further to the right before a tight left followed by another more open left.  The pit entry design is also amended as a result.

That extends the circuit length marginally, from 5.565km to 5.607km, and brings it on par with Singapore’s Marina Bay Street Circuit as the only venue with as many as 23 turns on the F1 calendar. “In the course of building our new track, and carrying out geographical assessments, we have adjusted Turn 22 and added Turn 23 in consultation with Formula 1 and the FIA,” said Le Ngoc Chi, CEO of the Vietnam Grand Prix Corporation.

The news comes after the organisers revealed the circuit was on track to be finished in early January 2020, with the 300m-long pit building, inspired by Hanoi’s Imperial Citadel of Thang Long, set to be ready before the end of 2019.  Construction was duly completed by the end of February, however the global Coronavirus pandemic has caused the cancellation of the race.  It is not yet clear if it will be rescheduled or whether it must wait for its debut in 2021.

The Hanoi Street Circuit is located in Hanoi, Vietnam. Noi Bai International Airport is around 40 minutes' drive from the circuit location.

The track in the vicinity of the My Dinh National Stadium on the western side of city. Details of fan access and transportation options will become known once event's rescheduling is confirmed.

Find the best hotel and flight deals near to Hanoi Street Circuit: