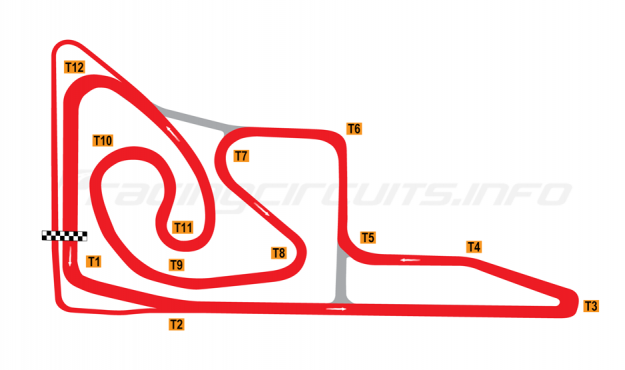 The Jiangsu Wantrack International Circuit (南京万驰国际汽车公园) is the first FIA-certified circuit in Jiangsu Province, near to the city of Nanjing in Eastern China. Built as part of a 2000 acre development, the circuit sits alongside driver training facilities, a 20,000 square metre test track, separate kart and cross-country courses, a five-star auto-themed hotel, car showroom facilities and - rather unusually - a strawberry picking park!

Built at a total cost of 200 million yuan, the main track is broadly "F" shaped and opened in 2014 following inspection by FIA circuit delegate Tim Schenken. In its longest form it is just 1.348 miles (2.169 km) and packs a lot into a relatively small space - which does at least mean all parts of the track are visible to spectators. Flat as a pancake and extremely tight and twisty, it is no Spa-Francorchamps and has a confusing variance in track width throughout. Nevertheless, with the circuit located within Nanjing City's Lishui Development Area and having more than 8 million people on its doorstep, it looks set to have a healthy future.

Among the first major championships to visit was the China Road Racing Championship for motorbikes in 2015, while 2016 sees the addition of the China Touring Car Championship. The circuit has also signed a co-operation agreement China's first permanent circuit at Zhuhai, which will see the two facilities commercial resources and professional technical staff.

The Jiangsu Wantrack International Circuit is located south of the city of Nanjing in Eastern China. Nanjing's Lukou International Airport is a short 20 minute drive from the circuit with a wide range of domestic flights and a handful of international destinations.

The circuit is located in the Lishui Economic Development Zone. From the centre of Nanjing, head south on highway S55 (宁宣高速/宁高高速). Then Take exit S123/S340 and head east along S340 (省道/机场路). There are tolls on both S55 and S340. Continue along S340 until you reach the intersection with Zhenzu North Road and turn right. The circuit entrance is a short distance along this road to your left.

Find the best hotel and room deals near to Jiangsu Wantrack International: