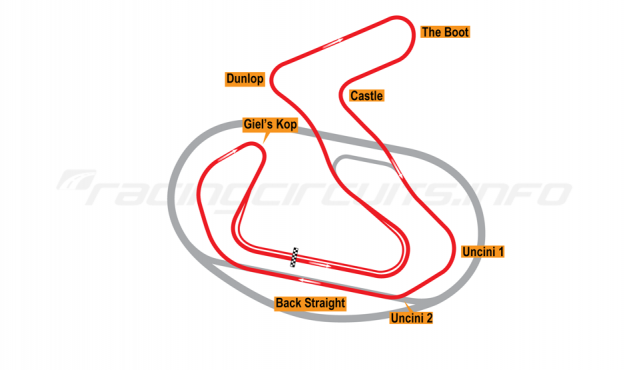 The Phakisa Freeway is located at Welkom, close to Bloemfontein in Free State and is aptly named, as 'phakisa' means 'hurry up' in Sotho. Although the circuit boasts a full oval superspeedway, it is the Grand Prix circuit on its infield that has seen almost all of the racing action, though today the facility is largely only used for testing and track day events.

The current complex is not however the first to exist at Welkom. In 1970 the Goldfields Raceway was built on the same site and was quickly pressed into action for the famous Springbok Series for sports cars. Flat and fairly featureless, the track was however fast, with a series of esses leading into a sweeping turn (which by the end of its life was flat out for Formula Ford racers) followed by a very lengthy straight on which huge speeds could be reached. A medium speed corner then lead onto a twistier section leading back to the pits.

Goldfields Raceway saw plenty of racing action during its life and became a staple on the Wesbank Modified Touring Car Series and then later the South African Touring Car Series. Over the years the track gained a reputation as a tyre-killer, but a resurfacing in 1995 alleviated the problem considerably.

Given that investment, it was perhaps surprising that the track should close altogether in 1997, in preparation for demolition and replacement by the current circuit. The carrot that was dangling in front of the facility's owners was the possibility of hosting international racing and the old raceway would not have met the required standards. The rise of interest in Indycar and NASCAR-style racing also led the developers to add an oval superspeedway into the mix - their confidence that a 'build-it-they-will-come' attitude proved wildly optimistic, at least as far as the oval was concerned.

Construction of the new facility commenced in September 1998 and by late April 1999 the track and paddock facilities had been completed in extra quick time - the first national event was held a mere six months after work had started.
The infield Grand Prix course was soon awarded a round of the Motorcycle World Championships and the track held the South African MotoGP between 1999 and 2004. A largely flat circuit, Phakisa has a habit of throwing up some peculiar race results and has a gained consistent reputation of featuring a slippery surface due to the dusty environment.

Garry McCoy slid his Yamaha to a well-earned first victory in 2000, while Tohru Ukawa chalked up his first win at Phakisa in 2002. In the final MotoGP race in 2004, Valentino Rossi scored a historic first victory for Yamaha, in the process becoming the first rider to win consecutive events for different manufacturers.

After MotoGP's departure, the venue struggled to attract international motorsport, thanks to the difficulties with the local economy. However, in late 2013, organisers of the World Superbike Championship announced their intention to once again visit the facility from 2014 onwards - but in the end, nothing came of it due to delays with getting the track re-homologated.

The oval circuit has proved something of a white elephant. Modelled after Las Vegas Motor Speedway, the D-shaped 1.5 mile speedway features 12 degree banking in the turns, nine degrees on the tri-oval and three degrees on the back stretch. Despite being designed for Indycar and NASCAR style racing, it lay completely unused for racing for its first decade, with Sarel van der Merwe being the only driver to turn laps in anger during the opening event.

Finally, in 2010 the American Speed Association imported 24 stock cars to the circuit and organised the Free State 500, pitting local drivers against a range of US and European racers, including former NASCAR star Geoff Bodine. Briton John Mickel won the event, passing Californian Toni McCray on the last lap, with Johann Spies best of the locals in fifth. It remains the only race held on the oval to date.

Phakisa Freeway can be found on the R70 highway between Odendaalsrus and Riebeeckstad, north of the city of Welkom in Free State. The closest international airport is at Bloemfontein, approximatley a 1h 50 mins drive away.