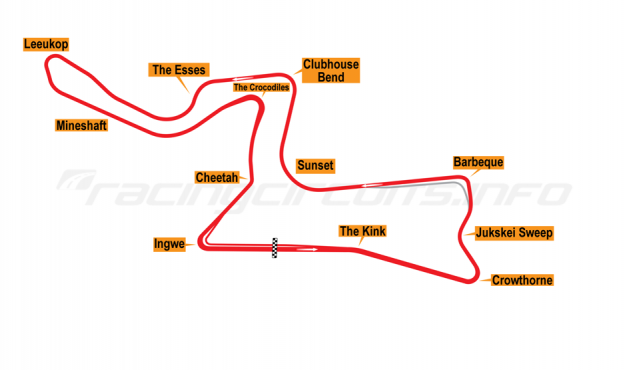 Kyalami has long been considered the centre of motor racing in South Africa and, appropriately, takes its name from a piece of land on its northern border;in the local isiZulu language, Kyalami means 'my home'. South Africa's turbulent political history has meant that Kyalami's fortunes have waxed and waned over the years, with uncertainty as to its future ever-present, though happily it now appears more secure than ever.

The idea for a motor racing venue near Johannesburg first came to a band of local enthusiasts in the early post war years who were hopeful of finding an alternative to the outdated Grand Central Circuit. A new, bigger, facility could accommodate the increasing local interest in motorsport with modern amenities and contemporary safety precautions. As an added bonus, it would supplant Cape Town's East London circuit as the country's leading track.

Johannesburg native Alex Blignaut, then one of the country's leading drivers, carried out an in-depth study into the viability of a circuit, calculating the level of investment required and the prospective returns that could be generated. A plot of land in the neighbourhood of Alberton was singled out as suitable and plans progressed. However, an alternative site in the Barangwanath area was then also proposed, and developments stalled.

Keen to move things along, the mayor of Johannesburg, Dave Marais, stepped in and proposed a meeting between all interested parties. Thus, in January 1961 a meeting was held in the Kelvin Hotel in Johannesburg and the South African Motor Racing Club was established. Francis Tucker was elected as president and Blignaut as club secretary.

The group considered a number of potential locations around the city, with Tucker and Blignaut favouring Kyalami, located in a hilly area 15 miles from the city centre. This was initially rejected, but the pair persisted and, after much deliberation, the go-ahead was given.

The club had already secured a number of long-term sponsorship deals, so member Basil Read was tasked with supervising the design and construction of the circuit. Working from from a comprehensive study of the world's leading circuits supplied to him by Shell, Read settled on particular surface dressing for the track to give maximum grip in all weather conditions. In choosing a layout, he was keen to maximise the view for spectators. He eventually chose a configuration which wound its way down the hillside along a long straight, before turning through a series of fast corners to a hairpin bend and climbing back up the hillside to the start and finish.

Construction was completed in October 1961 and the first races run in November of that year; the national championship's Rand Spring Trophy and a nine hour endurance race, the latter of which would become a major fixture in the following years. Public attendance was huge, thanks to the circuits closeness to Johannesburg, Pretoria and Witwatersrand. Spectators were left impressed by the viewing afforded from the stands – at least two-thirds of the circuit could be seen from most vantage points.

Between 1961 and 1966, the circuit established itself as a staple venue on the national scene, with a series of improvements, including the erection of covered grandstands, ensuring that there was continual development of the facilities. Finally, it was announced that the Formula One South African Grand Prix would move to Kyalami for 1967, transferring from East London.

A visit from CSI officials (forerunner to today's FIA) confirmed the circuit's general suitability, but recommended that the track be widened to bring it into line with international regulations. The South African Motor Racing Club took advantage of the mood of optimism at securing the race to push through a more extensive programme of works. As well as a general widening of the majority of the track to 12 yards, the main straight was increased to 13.3 yards wide. This involved dismantling the central grandstand and rebuilding it further back from the track and the complete remodelling of the pit and paddock. A dividing wall between the track and pits was erected for the first time and a new bridge connected the paddock with the outside of the circuit. A new track surface was also laid, as the original had proved too hard for the modern generation of racing tyres.

Kyalami soon became a favourite among the teams and drivers, its laid-back atmosphere proving a popular way to begin the racing year. It's usual good weather also established it as a major winter testing venue. Notable races included the 1976 Grand Prix, when Niki Lauda and James Hunt crossed the line just 1.3 seconds apart, establishing the form for the rest of the season; 1978, when Riccardo Patrese almost won for the new Arrows team and 1985 when Nigel Mansell scored his second win when team mate Keke Rosberg spun on oil left by a backmarker.

There were notable tragedies too; in 1974 Pete Revson was killed at Barbecue Bend while testing for Shadow, while Tom Pryce was killed during the 1977 race when an errant marshal ran out to tend to a broken down car on the pit straight. Pryce was killed instantly when the fire extinguisher being carried by Frederick Jansen van Vuuren struck him in the head; van Vuuren aslo succumbed to his injuries.

By the mid-80s, questions over circuit safety took a back seat to South Africa's deteriorating political situation. The French Government banned the state-financed Renault and Ligier teams from taking part in the 1985 race as part of the anti-apartheid campaign. Then, when increasing violence in the country led to the declaration of a state of emergency which would last until 1990, motor racing turned its back on South Africa.

The circuit soldiered on with national series races but the facilities began to deteriorate and it appeared the writing was on the wall. The increasing urban sprawl of Johannesburg meant that Kyalami had gone from being a circuit in open countryside was no nestling uncomfortably against residential and commercial properties. Rising land values meant the viability of the circuit was increasingly in question, with pressure to redevelop for other uses high.

In 1988, a plan to save racing at Kyalami – if not the original circuit – was announced. Half of the land would be sold for development and a new course established on cheaper land further down the hillside. Proceeds from the land sale would fund reconstruction.

Much of the old circuit was ploughed under; the pit straight, Crowthorne's and Barbeque Bend were consigned to history but the return loop was incorporated into the new circuit. This was a twistier and slower circuit than its predecessor, though it still presented its own challenges and featured good elevation changes, particularly on the new stretch leading from the Westbank Corner, quickly named 'The Mineshaft'. New pit and paddock facilities were built on what had once been the straight from Jukskei to Sunset and the circuit settled into hosting national series racing once more.

International racing returned in 1990 with a invitation race for the German DTM touring cars. Political overtones were still strong, thanks to the continuance of apartheid. Foreign minister Pik Botha welcomed the German teams in person, stating that this was the beginning of opening the doors from South Africa to the western world. Later that year, the Williams team tested at the new track and the following winter Benetton, Brabham and Tyrrell all flew south for tests.

Positive reports from the teams and a changing political situation following the end of apartheid led to a new effort to restore an F1 Grand Prix to Kyalami. In order to bring the circuit back up to F1 standards, a new extension on the southern portion of the track was built, housing new pit buildings and paddock facilities. The Panasonic Corner, which had lead onto the previous start/finish, was also modified, while there was a general widening of run-offs and gravel traps.

The work was rewarded when Kyalami was included as the season-opener for the 1992 season, Nigel Mansell romping to victory for Williams. The 1993 race proved eventful, when a late race thunderstorm flooded the course leading to many spins and crashes, Alain Prost running out the winner.

Financial problems and the arrest of the race promoter on fraud charges meant that 1993 would be the final Grand Prix at Kyalami. That same year, the circuit was acquired by the South African Automobile Association which managed to run the facility at a profit, using its conference rooms and exhibition centres to raise money. A small change was also made at the Kink corner – a lack of run-off had caused concern and a clumsy chicane was inserted as a result. National racing series once again formed Kyalami's bread and butter for the next few years, though there was a one-off invitational F3000 event in 1995, won by Dutch veteran Jan Lammers.

South Africa's economy had recovered sufficiently by the late 1990s for international racing to be a viable proposition once more. In 1998, the circuit hosted the World Superbike Series for the first time and would become an annual fixture until 2002. In 2005, a round of the Grand Prix Masters series was held (Nigel Mansell continuing his successes at the venue with victory over Emerson Fittipaldi) before economics once again brought international racing to a close.

Towards the end of the decade, the political winds had changed once more, and in a bid to increase tourism and investment in the region, the Gauteng government struck deals with the A1GP Series, World Superbike and the Superstars touring car series to host races at Kyalami from 2009 onwards.

A1GP hosted races in February, won by Jeroen Bleekemolen for the Netherlands and Neel Jani for Switzerland. After these races, the circuit was modified, with the clumsy chicane removed ahead of the World Superbike races, which went on to be won by Nori Haga's Ducati.

After two seasons of racing, the global recession took hold firmly and, with new leadership and forced cut costs, the Gauteng government ended its investment in international motorsports. Thus the 2010 event was the last, the provincial government agreeing to pay R115m (£10.29m) to FGSport in order to bring the Kyalami WSBK and Superstars contracts to an end. A1GP events also ceased, though in this case due to the collapse of the series, again due to the economic climate.

Kyalami was put up for auction in July 2014 and was bought after less than two minute's of bidding by Porsche South Africa chairman Toby Venter for R205 million (around £11.5 million /US$19.5 million). Venter immediately announced that the circuit would continue to host motorsport as well as potentially becoming the headquarters for Porsche South Africa.

The new 4.522km Grand Prix circuit has been certified by the Federation International de l'Automobile (FIA) as a Grade 2 race track, conforming to stringent international safety and quality standards. Kyalami is the only current motor racing facility on the African continent to have been bestowed with such prestigious accreditation.

International motorsport returned in November 2019, when the SRO organisation brought the popular GT3 cars to the circuit for a revival of the Kyalami 9 Hours, run as a round of the Interncontinental GT Challenge.

Kyalami is situated 15 miles north of  the centre of Johannesburg, South Africa.  The nearest international airport is at Johanessburg, around a 30 minute drive away.

The circuit itself is located on Allandale Road, alongside the R55 Highway (Pitts Avenue).

International events have used a park and ride system in recent years, meaning there is no at-circuit parking - should large scale racing return to Kyalami, these arrangements may well apply and it would be advisable to check with race organisers.  On site parking may well still be offered from smaller national series events.

Find the best hotel and room deals near to Kyalami: